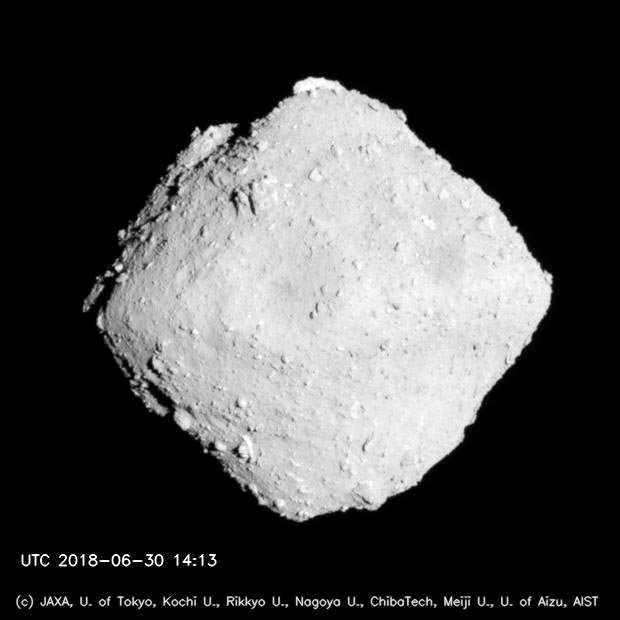 In December 2020, a small landing capsule brought rock particles from the asteroid Ryugu to Earth – material from the beginnings of our solar system. The Japanese space probe Hayabusa 2 had collected the samples.

Geoscientist Professor Frank Brenker and his team from Goethe University Frankfurt were among the first researchers wordwide allowed literally to “shed light” on these scientifically precious samples. In the process, they discovered areas with a massive accumulation of rare earths and unexpected structures. As part of an international research collaboration, they have now reported on this in the scientific journal Science.

Frank Brenker and his team are world leaders in a method that makes it possible to analyse the chemical composition of material in a three-dimensional and entirely non-destructive way and without complicated sample preparation – yet with a resolution of under 100 nanometres. Resolution expresses the smallest perceptible difference between two measured values. The method’s long name is “Synchrotron Radiation induced X-Ray Fluorescence Computed Tomography”, in short SR-XRF-CT.

Japan had chosen Ryugu (English: Dragon’s Palace) as the probe’s destination because it is an asteroid which, due to its high carbon content, promised to deliver particularly extensive information about the origin of life in our solar system. The analyses conducted on 16 particles by the researchers together with the scientists in Frankfurt have now shown that Ryugu is composed of CI-type material. These are very similar to the Sun in terms of their chemical composition. So far, CI-material has only rarely been found on Earth – material of which it was unclear how much it had been altered or contaminated when entering Earth’s atmosphere or upon impact with our planet. Furthermore, the analysis confirms the assumption that Ryugu originated from a parent asteroid which formed in the outer solar nebula.

Until now, scientists had assumed that there was hardly any transport of material within the asteroid due to the low temperatures during the formation of the CI material in the early days of the solar system and therefore scarcely any possibility for a massive accumulation of elements. By means of SR-XRF-CT, however, the researchers in Frankfurt found a fine vein of magnetite – an iron oxide mineral – and hydroxyapatite, a phosphate mineral, in one of the grains of the asteroid. Other groups of scientists established that the structure and other magnetite-hydroxyapatite regions in the Ryugu samples must have formed at a surprisingly low temperature of under 40 °C. This finding is fundamental for interpreting almost all the results that the analysis of the Ryugu samples has generated and will generate in future.

In areas of the samples containing hydroxyapatite, Frank Brenker’s team additionally detected rare earth metals – a group of chemical elements indispensable today for alloys and glassware for high-tech applications, among others. “The rare earths occur in the hydroxyapatite of the asteroid in concentrations 100 times higher than elsewhere in the solar system,” says Brenker. What’s more, he says, all the elements of the rare earth metals have accumulated in the phosphate mineral to the same degree – which is also unusual. Brenker is convinced: “This equal distribution of rare earths is a further indication that Ryugu is a very pristine asteroid that represents the beginnings of our solar system.”

It is by no means a matter of course that researchers from Goethe University Frankfurt were allowed to examine samples from the Hayabusa 2 mission: after all, Japan undertook this space mission alone and, according to information from 2010, raised €123 million for it. It therefore also wants to reap a large part of the scientific harvest. But ultimately Japan did not want to forego the expertise of the German SR-XRF-CT specialists.

https://global.jaxa.jp/press/2022/09/20220923-1_e.html The research results by the Hayabusa2 Initial Analysis of Stones Team (led by Prof. Tomoki Nakamura, Tohoku University), including this research result, were published in Science on Thursday, September 22, 14pm EST.