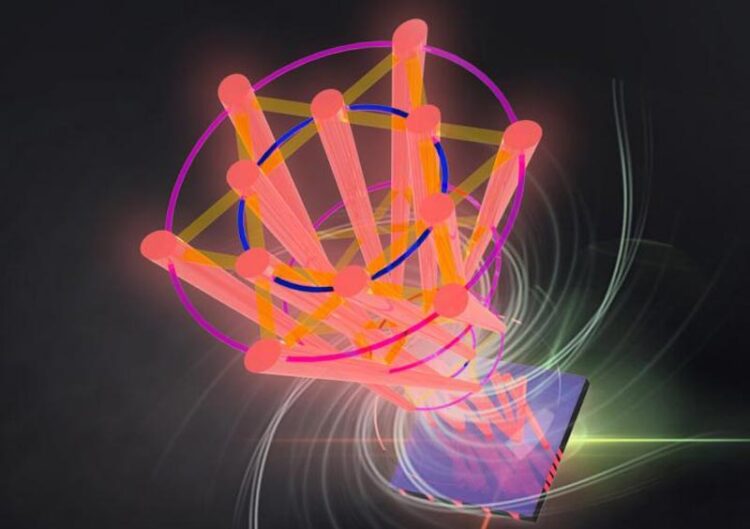 Typically, light emitted from standard lasers has a controllable degree of freedom (DoF) which may be polarisation or beam shape. By suitably manipulating a laser with the introduction of specialised optical components, an output with 2 DoFs, such as vector vortex beams with controllable polarisation and orbital angular momentum (OAM). The term ‘vector’ describes a structured change in the polarisation across the beam and ‘vortex’ describes the twisting of the phase in the beam (OAM), much like a twisting tornado. Transcending 2 DoFs from a laser was not possible. By exploiting ray-wave duality in a frequency-degenerate laser, a vector beam with 5 DoFs can now be selected.

The concept of ray-wave duality inside lasers may be described as a mode wave pattern that is associated with a periodic ray trajectory. A standard laser has a mode pattern that oscillates between the centre of two mirrors on a straight path that is perpendicular to the mirrors. However, in the case of a periodic trajectory, the mode pattern also oscillates between two mirrors but follows a non-perpendicular path, similar to a zig-zag pattern. Prior studies have only reported on a single trajectory with a certain transverse size, however, this work demonstrated the selection of two trajectories with different transverse sizes and oscillating phases, associated with astigmatic transformation. This exotic output constitutes 4 DoFs, namely, periodic number (number of rays), transverse index (number of output rays), oscillating phase, and astigmatic degree. This results in a vector structured output and in turn, the 5th degree of freedom. With this, the output is transformed into a twisted trajectory by converting the transverse index into one that possesses OAM with an external astigmatic mode convertor.

Importantly, this ray-wave structured output is said to be non-separable, akin to the quantum mechanics description of entangled states, in the orientation angle between the transverse indices. “We believe it holds great novelty, because the creation of such ultra-DoF vectorial light is highly beneficial in describing and further exploring fundamental physical phenomena such as optical spin Hall effects, for extending new applications in optical tweezers and communications and to manipulate new quantum-like classical states,” says Dr Shen.

The experimental demonstration comes from an otherwise “empty” laser cavity, the absence of specialised optical components. This poses an additional benefit in that the laser consists of a simple architecture, however, outputs a vector beam with 5 DoFs, certainly beyond an incremental advance. “The number of rays in the twisted output may be easily be manipulated by careful control of the laser parameters such as the distance between the mirrors and the pump position, which provides a simple, compact, and elegant at-the-source solution,” says Dr Darryl Naidoo of the CSIR.

“South Africa and China are already partners under BRICS, with plans for a virtual photonics centre to be established under this programme. The present work has highlighted what is possible when you bringing together teams from the best institutes in China (Tsinghua U.) and South Africa (CSIR and U. Witwatersrand). We hope that such collaborative initiatives can continue into the future,” says Prof. Andrew Forbes of WITS University.

The laser concept is likely to attract interest from both the academic and industrial communities. This output holds promise to conveniently extend applications in the vector beam space and having such beams on demand from a laser will certainly open up new application areas.