An insulator made of two conductors 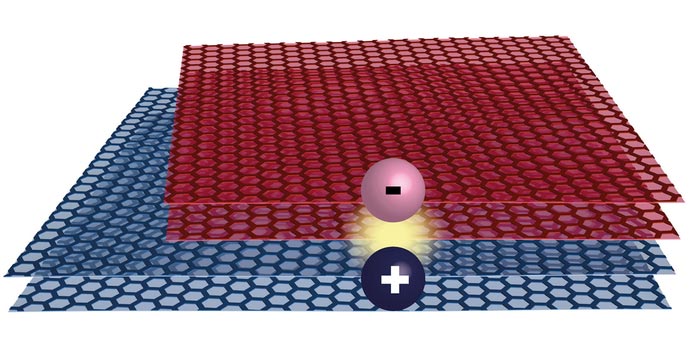 Ohm’s law is well-known from physics class. It states that the resistance of a conductor and the voltage applied to it determine how much current will flow through the conductor. The electrons in the material – the negatively charged carriers – move in a disordered fashion and largely independently of each other. Physicists find it far more interesting, however, when the charge carriers influence one another strongly enough for that simple picture not to be correct anymore.

This is the case, for instance, in “Twisted Bilayer Graphene”, which was discovered a few years ago. That material is made from two wafer-thin graphene layers consisting of a single layer of carbon atoms each. If two neighbouring layers are slightly twisted with respect to each other, the electrons can be influenced in such a way that they interact strongly with one another. As a consequence, the material can, for instance, become superconducting and hence conduct current without any losses.

A team of researchers led by Klaus Ensslin and Thomas Ihn at the Laboratory for Solid State Physics at ETH Zurich, together with colleagues at the University of Texas in Austin (USA), has now observed a novel state in twisted double layers of graphene. In that state, negatively charged electrons and positively charged so-called holes, which are missing electrons in the material, are correlated so strongly with each other that the material no longer conducts electric current.

“In conventional experiments, in which graphene layers are twisted by about one degree with respect to each other, the mobility of the electrons is influenced by quantum mechanical tunnelling between the layers”, explains Peter Rickhaus, a post-doc and lead author of the study recently published in the journal “Science”. “In our new experiment, by contrast, we twist two double layers of graphene by more than two degrees relative to each other, so that electrons can essentially no longer tunnel between the double layers.”

As a result of this, by applying an electric field electrons can be created in one of the double layers and holes in the other. Both electrons and holes can conduct electric current. Therefore, one would expect the two graphene double layers together to form an even better conductor with a smaller resistance.

Under certain circumstances, however, the exact opposite can happen, as Folkert de Vries, a post-doc in Ensslin’s team, explains: “If we adjust the electric field in such a way as to have the same number of electrons and holes in the double layers, the resistance suddenly increases sharply.” For several weeks Ensslin and his collaborators were unable to make sense of that surprising result, but eventually their theory colleague Allan H. MacDonald from Austin gave them a decisive hint: according to MacDonald, they had observed a new kind of density wave.

So-called charge density waves usually arise in one-dimensional conductors when the electrons in the material collectively conduct electric current and also spatially arrange themselves into waves. In the experiment performed by the ETH researchers, it is now the electrons and holes that pair with each other by electrostatic attraction and thus form a collective density wave. That density wave, however, now consists of electrically neutral electron-hole pairs, so that the two double layers taken together can no longer conduct electric current.

“That’s a completely new correlated state of electrons and holes which has no overall charge”, says Ensslin. “This neutral state can, nevertheless, transmit information or conduct heat. Moreover, what’s special about it is that we can completely control it through the twisting angle and the applied voltage.” Similar states have been observed in other materials in which electron-hole pairs (also known as excitons) are created through excitation using laser light. In the experiment at ETH, however, the electrons and holes are in their ground state, or state of lowest energy, which means that their lifetime is not limited by spontaneous decay.

Ensslin, who specializes in the investigation of the electronic properties of small quantum systems, is already speculating about possible practical applications for the new correlated state. However, this will require a fair amount of preparatory work. One could trap the electron-hole pairs, for instance in a (Fabry-Pérot) resonator. That is very demanding, as neutral particles cannot be directly controlled, for example using electric fields. The fact that the state is electrically neutral might, on the other hand, turn out to be an advantage: it could be exploited to make quantum memories less susceptible to electric field noise.