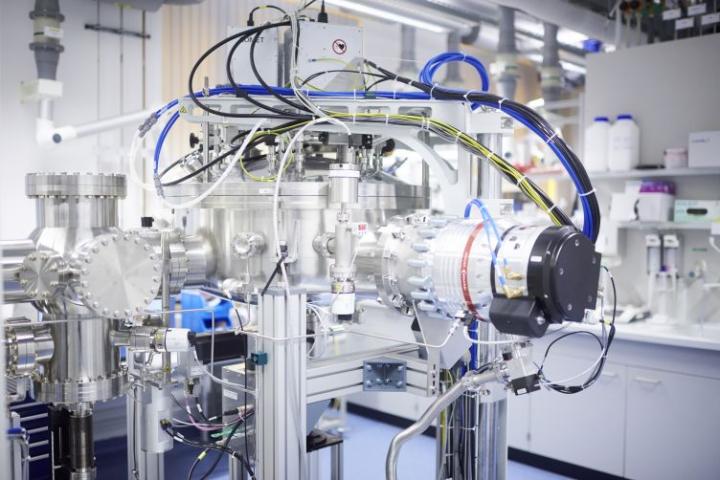 Prospective digital data storage devices predominantly rely on novel fundamental magnetic phenomena. The better we understand these phenomena, the better and more energy efficient the memory chips and hard drives we can build.

Physicists from the Helmholtz-Zentrum Dresden-Rossendorf (HZDR) and the Helmholtz-Zentrum Berlin (HZB) have now completed the essential fundamental work for future storage devices: Using a creative approach of shaping magnetic thin films in curved architectures, they validated the presence of chiral responses in a commonly used magnetic material.

This facilitates the creation of magnetic systems with desired properties that rely on simple geometrical transformations. The team has now presented their work in the journal Physical Review Letters (DOI: 10.1103/physrevlett.123.077201).

We all know that our left hand is different from our right – a left glove won't fit your right hand and vice versa. Scientists use the term “chirality” to describe objects that do not align with their mirror image. Chemists, in particular, are familiar with this property in molecules, as in left- and right-rotating lactic acid. Humans metabolize the right-rotating variant more easily than its “mirror image”.

Such chiral effects are known to occur in magnetic materials, where magnetic textures also have chiral properties: the arrangement of individual magnetic moments inside the material, or, figuratively speaking, the alignment of the many tiny “compass needles” that make up a magnet, could form right- and left-handed alignments.

Under certain conditions, some textures behave like image and mirror image – a left-handed texture cannot be made congruent with its right-handed version.

The interesting aspect here is that “the two textures can present different magnetic behaviors,” as HZDR physicist Dr. Denys Makarov points out. “To put it simply: a right-handed texture can be more energetically preferable than a left-handed texture.

Since systems in nature tend to assume their lowest possible energetic state, the right-handed state is preferred.” Such chiral effects hold great technological promise. Among other things, they could be helpful in the future development of highly energy-efficient electronic components such as sensors, switches, and non-volatile storage devices.

“Helimagnets are materials with well-defined chiral magnetic properties, due to a lack of internal magnetic symmetry,” explains the lead author of the paper, Dr. Oleksii Volkov from HZDR's Institute of Ion Beam Physics and Materials Research. “Despite the fact that they have been known for a long time, these are rather exotic materials that are difficult to produce. Moreover, helimagnets usually exhibit their unique chiral properties at low temperatures.”

That is why Makarov's team chose a different path. They used a common magnetic material, iron-nickel alloy (known as Permalloy), to build curved objects like parabola-shaped strips. Using lithography, they formed various parabolic strips of several micrometers from thin sheets of Permalloy.

This delayed response is due to chiral effects caused by the curvature at the apex area of the parabola strips. “Theorists have predicted this unusual behavior for some time, but it was actually considered more of a theoretical trick,” explains Dr. Florian Kronast of Helmholtz-Zentrum Berlin. “But now we have shown that this trick actually works in practice. We detected magnetic chiral response in a conventional soft ferromagnetic material, just through the geometric curvature of the strips we used.”

In the process, the team were faced with two more surprises: On the one hand, the effect was remarkably strong, which means it could be used to influence the magneto-electric responses of materials.

On the other hand, the effect was detected in a relatively large object: micrometer-sized parabolas that can be produced using conventional lithography. Previously, experts had assumed that these curvature-induced chiral effects could only be observed in magnetic objects with dimensions of about a dozen of nanometers.