A unique observation of particle pair creation in photon-photon collisions 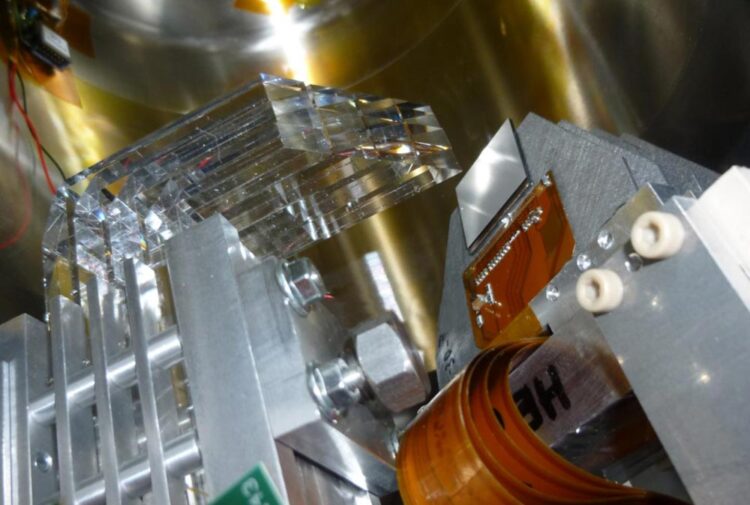 A picture of the AFP detector taken during its installation in the LHC tunnel. The quartz time-of-flight detector is on the left, the silicon pixel detector - on the right. (Source: IFJ PAN)

Creation of matter in an interaction of two photons belongs to a class of very rare phenomena. From the data of the ATLAS experiment at the LHC, collected with the new AFP proton detectors at the highest energies available to-date, a more accurate – and more interesting – picture of the phenomena occurring during photon collisions is emerging.

If you point a glowing flashlight towards another one, you do not expect any spectacular phenomena. The photons emitted by both flashlights simply pass by each other. However, in certain collisions involving high-energy protons the situation is different. The photons emitted by two colliding particles may interact and create a pair of matter and antimatter particles. Traces of processes such as these have just been observed in the ATLAS experiment at the Large Hadron Collider (LHC) at CERN near Geneva. Precise observations were carried out using the new AFP (ATLAS Forward Proton) spectrometer, developed with significant participation of scientists from the Institute of Nuclear Physics of the Polish Academy of Sciences (IFJ PAN) in Cracow. The Polish physicists, funded by the National Science Centre and the Ministry of Science and Higher Education, have been involved in the development of AFP detectors since the conception of these devices.

“Observations of the creation of particles of matter and antimatter from electromagnetic radiation go back to the beginnings of nuclear physics”, says Prof. Janusz Chwastowski, head of the team of physicists at the IFJ PAN involved in the AFP detectors.

Indeed, it was February 1933 when Patrick Blackett (Nobel 1948) and Giuseppe Occhialini reported an observation of the creation of an electron-positron pair initiated by a quantum of cosmic radiation. The creation of matter and antimatter was therefore noticed earlier than the reverse process, i.e. the famous and spectacular positron annihilation. The first observations of the latter were made in August 1933 by Theodor Heiting, and three months later by Frédéric Joliot.

“In the most commonly recorded events of creation, one photon transforms into a particle and an antiparticle. In contrast, the phenomenon we are studying is of a different nature. The particle-antiparticle pair arises here due to the interaction of two photons. The possibility of such processes was first reported by Gregory Breit and John A. Wheeler in 1934,” continues Prof. Chwastowski.

As a charged particle, the proton moving inside the LHC beam pipe is surrounded by an electric field. Since the carriers of electromagnetic interactions are photons, the proton can be treated as an object surrounded by photons.

“In the LHC beam pipe, protons reach velocities very close to the speed of light. A proton and the surrounding field undergo the Lorentz contraction along the direction of motion. Thus, from our point of view, a proton moving at almost the speed of light is associated with particularly violent oscillations of the electromagnetic field. When such a proton approaches another one accelerated in the opposite directions – and this is the situation we are dealing with at the LHC – an interaction between the photons may occur”, explains Dr. Rafal Staszewski (IFJ PAN).

At the LHC, collisions of highly energetic proton beams occur in several places, including the one located inside the giant ATLAS detector. If two photons collide, the result could be an electron-positron pair or a muon-antimuon pair (a muon is about 200 times more massive than an electron). These particles, which belong to the lepton family, produced at large angles with respect to the proton beams, are recorded inside the main ATLAS detector. Such phenomena have been observed at the LHC before.

“The point is, we have two more protagonists of two-photon processes! These are, naturally, the photon sources, i.e. the two passing protons. Thus we get to the essence of our measurement,” says Dr. Staszewski and explains: “As a result of the photon emission, each proton loses some energy but, importantly, it practically does not change the direction of its motion. So, it escapes the detector together with other protons in the beam. However, the proton that emitted the photon has a slightly lower energy than the beam protons. Therefore, the accelerator magnetic field deflects it more, and this means that it gradually moves away from the beam. These are the protons we are hunting for with our AFP spectrometers”.

Each of the four AFP tracking units contains four sensors: 16×20 mm semiconductor pixel plates, placed one behind the other. A proton that passes through the sensors deposits some energy and thus it activates the pixels on its path. By analysing all the activated pixels, the proton path and properties can be reconstructed.

The need to record protons only slightly deflected from the main beam means that the AFP spectrometers have to be inserted directly inside the LHC beam pipe, just a few millimetres away from the circulating beams.

“When you are operating so close to a particle beam with such high energies, you have to be aware of the risks. The smallest error in the positioning of the spectrometer could result in burning a hole in it. It would be very upsetting, but that would really be the least of our problems. The resulting debris would contaminate at least a part of the accelerator causing its shut down for some time,” notes Prof. Chwastowski.

The measurements described here were carried out with AFP spectrometers placed at a distance of about 200 m from the point at which the protons collided.

“Protons interact at the LHC in many ways. As a result, the protons observed in the AFP spectrometers may originate from processes other than those associated with photon-photon interactions. To search for the right protons, we needed to have precise knowledge about the properties of each particle,” emphasises PhD student Krzysztof Ciesla (IFJ PAN), who dealt with the initial analysis of the raw data collected by the AFP spectrometers in 2017 and converting them into information about the energies and momenta of the registered protons. The results of the proton energy measurements were then juxtaposed with the energies of the created lepton pair and, based on conservation principles, it was determined whether the observed proton could be the source of the interacting photon.

The measurements using the AFP spectrometers proved to be highly statistically significant, at nine standard deviations (sigma). For comparison, a five-sigma measurement is usually sufficient to announce a scientific discovery. So, the AFP spectrometers have successfully passed the test, proved usefulness of the method and provided very interesting, though still unclear, results. It turned out that theoretical predictions do not fully agree with the determined characteristics of the investigated interactions. Clearly there are hidden nuances in the two-photon processes observed in high energy proton-proton collisions that require better understanding and further measurements.

The Henryk Niewodniczanski Institute of Nuclear Physics (IFJ PAN) is currently one of the largest research institutes of the Polish Academy of Sciences. A wide range of research carried out at IFJ PAN covers basic and applied studies, from particle physics and astrophysics, through hadron physics, high-, medium-, and low-energy nuclear physics, condensed matter physics (including materials engineering), to various applications of nuclear physics in interdisciplinary research, covering medical physics, dosimetry, radiation and environmental biology, environmental protection, and other related disciplines. The average yearly publication output of IFJ PAN includes over 600 scientific papers in high-impact international journals. Each year the Institute hosts about 20 international and national scientific conferences. One of the most important facilities of the Institute is the Cyclotron Centre Bronowice (CCB), which is an infrastructure unique in Central Europe, serving as a clinical and research centre in the field of medical and nuclear physics. In addition, IFJ PAN runs four accredited research and measurement laboratories. IFJ PAN is a member of the Marian Smoluchowski Kraków Research Consortium: “Matter-Energy-Future”, which in the years 2012-2017 enjoyed the status of the Leading National Research Centre (KNOW) in physics. In 2017, the European Commission granted the Institute the HR Excellence in Research award. The Institute holds A+ Category (the highest scientific category in Poland) in the field of sciences and engineering.

The website of the Institute of Nuclear Physics, Polish Academy of Sciences.

Press releases of the Institute of Nuclear Physics, Polish Academy of Sciences.

IFJ210218b_fot02s.jpg HR: http://press.ifj.edu.pl/news/2021/02/18/IFJ210218b_fot02.jpg
In the LHC accelerator, collisions between photons can happen when protons fly past each other inside the ATLAS detector. Pairs of the created leptons are detected inside the ATLAS, while the protons that were the photon sources are observed by AFP detectors located approximately 200 m from the collision point. (Source: IFJ PAN)