A spin trio for strong coupling 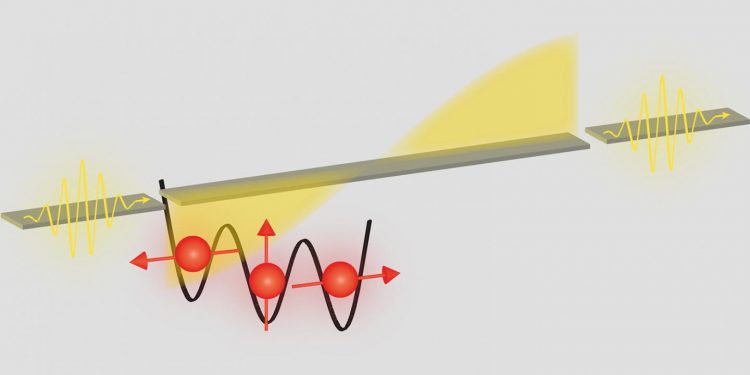 A spin-trio of electrons trapped in quantum dots (red). Quantum mechanical tunnelling between the quantum dots results in a dipole moment that couples strongly to the electromagnetic wave of a resonator (yellow). Credit: ETH Zurich / Andreas Landig

A team of scientists working in several research groups at ETH Zurich, assisted by theoretical physicists at Sherbrooke University in Canada, have now demonstrated how this problem can be avoided. To do so, they found a way to couple a microwave photon to a spin qubit in a quantum dot.

Qubits with charge or spin

In quantum dots, electrons are first trapped in semiconductor structures measuring just a few nanometres that are cooled to less than one degree above the absolute zero of the temperature scale. The logical values 0 and 1 can now be realized in two different ways. One either defines a qubit in terms of the position of the electron on the right or left side of a double quantum dot, or else by the spin of the electron, which can point up or down.

The first case is called a charge qubit, which couples strongly to electromagnetic waves through the displacement of electric charge. A spin qubit, on the other hand, can be visualized as a tiny compass needle that points up or down. Much like a compass needle, a spin is also magnetic and, therefore, does not couple to electric but rather to magnetic fields. The coupling of a spin qubit to the magnetic part of electromagnetic waves, however, is much weaker than that of a charge qubit to the electric part.

This means that, on the one hand, a spin qubit is less susceptible to noise and keeps its coherence (on which the action of a quantum computer is based) for a longer period of time. On the other hand, it is considerably more difficult to couple spin qubits to each other over long distances using photons. The research group of ETH professor Klaus Ensslin uses a trick to make such a coupling possible nevertheless, as the post-doc Jonne Koski explains: “By realising the qubit with not just a single spin, but rather three of them, we can combine the advantages of a spin qubit with those of a charge qubit.”

In practice, this is done by producing three quantum dots on a semiconductor chip that are close to each other and can be controlled by voltages that are applied through tiny wires. In each of the quantum dots, electrons with spins pointing up or down can be trapped. Additionally, one of the wires connects the spin trio to a microwave resonator. The voltages at the quantum dots are now adjusted in order to have a single electron in each quantum dot, with the spins of two of the electrons pointing in the same direction and the third spin pointing in the opposite direction.

According to the rules of quantum mechanics, the electrons can also tunnel back and forth between the quantum dots with a certain probability. This means that two of the three electrons can temporarily happen to be in the same quantum dot, with one quantum dot remaining empty. In this constellation the electric charge is now unevenly distributed. This charge displacement, in turn, gives rise to an electric dipole that can couple strongly to the electric field of a microwave photon.

The scientists at ETH were able to clearly detect the strong coupling by measuring the resonance frequency of the microwave resonator. They observed how the resonance of the resonator split into two because of the coupling to the spin trio. From that data they could infer that the coherence of the spin qubit remained intact for more than 10 nanoseconds.

Spin trios for a quantum bus

The researchers are confident that it will soon be possible to realize a communication channel for quantum information between two spin qubits using this technology. “This will require us to put spin trios on either end of the microwave resonator and to show that the qubits are then coupled to each other through a microwave photon”, says Andreas Landig, first author of the article and PhD student in Ensslin's group. This would be an important step towards a network of spatially distributed spin qubits. The researchers also emphasize that their method is very versatile and can straightforwardly be applied to other materials such as graphene.

This work was carried out in the framework of the National Centre of Competence in Research Quantum Science and Technology (NCCR QSIT). At ETH Zurich, scientists in the groups of Klaus Ensslin, Thomas Ihn, Werner Wegscheider and Andreas Wallraff were involved in the research.