Home / Physics and Astronomy / A new stable form of plutonium discovered at the ESRF
21.10.2019

A new stable form of plutonium discovered at the ESRF 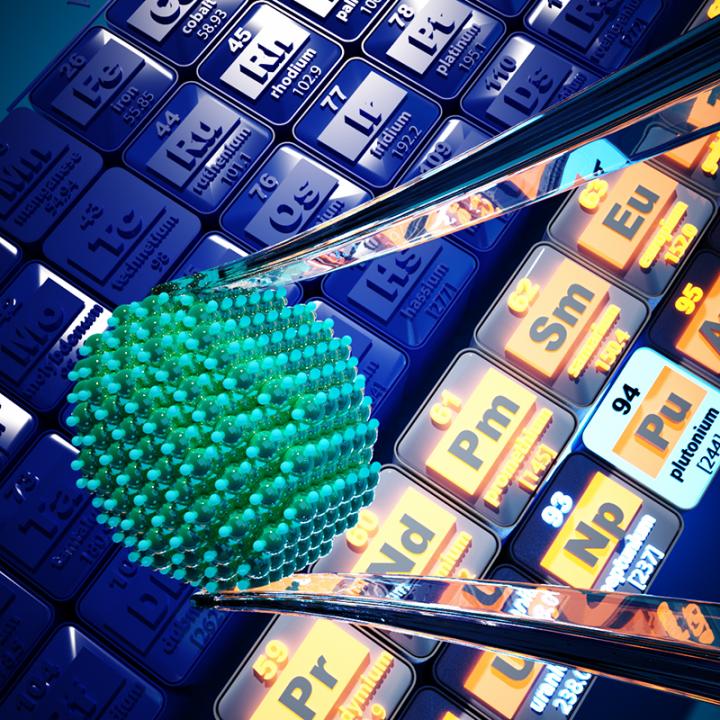 Representation of a plutonium dioxide nanoparticle, with the periodic table in the background. Credits: Kristina Kvashnina

Countries across the globe are making efforts to improve the safety of the nuclear waste storage in order to prevent release of radioactive nuclides to the environment. Plutonium, has been shown to be transported by groundwaters from contaminated sites for kilometres in the form of colloids, which are formed by interaction with clay, iron oxides or natural organic matter.

A team of scientists lead by HZDR studies the chemistry of actinides under environmentally relevant conditions, by synthesizing such compounds, and then studying their electronic and structural behaviour both with advanced synchrotron X-ray methods experimentally as well as theoretically.

The latest paper of the international team shows how an experiment seemingly gone wrong leads to a breakthrough: the discovery of a new stable form of plutonium.

It all started when Kristina Kvashnina, physicist from HZDR and based at the ROBL beamline at the European Synchrotron – ESRF (a beamline owned and operated by the HZDR), and her team were trying to create plutonium dioxide nanoparticles using different precursors to be studied at ROBL.

When they used the Pu (VI) precursor, they realized that a strange reaction took place during the formation of the plutonium dioxide nanoparticles.

“Every time we create nanoparticles from the other precursors Pu(III), (IV) or (V) the reaction is very quick, but here we observed a weird phenomenon half way”, explains Kvashnina. She figured that it must be Pu (V), pentavalent plutonium, a never-observed-before form of the element, after doing a high-energy resolution fluorescence detection (HERFD) experiment at the Pu L3 edge at ROBL.

Stable phase of Pu(V)! – no, it is impossible, it doesn't exist, the synthesis must have gone wrong”, said, at the time, the team of chemists, from the Moscow State University when they all together looked at the data. “Chemists were in complete disbelief, but the results were quite clear”, Kvashnina adds.

The only way to be certain of the existence of this pentavalent compoundwould be to confirm it using HERFD at the Pu M4 edge. Kvashnina explains: “Our choice of beamline was straightforward: ESRF-ID26 beamline, as it is the best place, regarding the intensity and energy resolution, where such high-energy resolution x-ray absorption spectroscopy studies at low energies can be done.

In fact Pu M4 edge HERFD experiment was done at ID26 for the first time. To the best of our knowledge, HERFD data at the Pu M4 edge have never been reported in the literature and never been exploited”.

The experiments confirmed the initial assumption, and a repetition three months later even demonstrated the long-term stability of the phase.. At the same time, theoreticians in Sweden were busy coming up with predictions of the Pu M4 edge spectral features and theoreticians from ROBL identified the species of that new phase. In the end it all came together and the new Pu (V) phase was confirmed.

Many scientists work on prediction of what happens to the nuclear waste in million years. “It is a difficult task and only theoretical predictions are possible, but the existence of this new Pu(V) solid phase, which is stable, will have to be taken into account from now on. It will change, for sure, the theoretical predictions of plutonium behaviour in the environment over a period of million years”, concludes Kvashnina.