A new filter to better map the dark universe 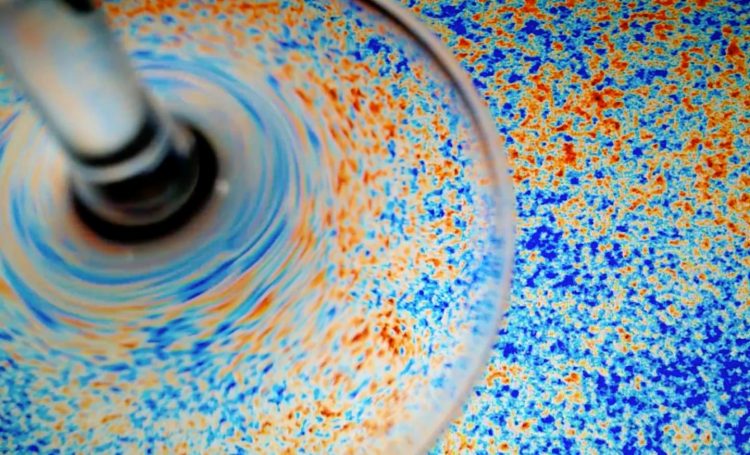 Just as a wine glass distorts an image showing temperature fluctuations in the cosmic microwave background in this photo illustration, large objects like galaxy clusters and galaxies can similarly distort this light to produce lensing effects. (Credit: Emmanuel Schaan and Simone Ferraro/Berkeley Lab)

The earliest known light in our universe, known as the cosmic microwave background, was emitted about 380,000 years after the Big Bang. The patterning of this relic light holds many important clues to the development and distribution of large-scale structures such as galaxies and galaxy clusters.

Set a stemmed wine glass on a surface, and you can see how lensing effects can simultaneously magnify, squeeze, and stretch the view of the surface beneath it. In lensing of the CMB, gravity effects from large objects like galaxies and galaxy clusters bend the CMB light in different ways.

These lensing effects can be subtle (known as weak lensing) for distant and small galaxies, and computer programs can identify them because they disrupt the regular CMB patterning.

There are some known issues with the accuracy of lensing measurements, though, and particularly with temperature-based measurements of the CMB and associated lensing effects.

While lensing can be a powerful tool for studying the invisible universe, and could even potentially help us sort out the properties of ghostly subatomic particles like neutrinos, the universe is an inherently messy place.

And like bugs on a car's windshield during a long drive, the gas and dust swirling in other galaxies, among other factors, can obscure our view and lead to faulty readings of the CMB lensing.

There are some filtering tools that help researchers to limit or mask some of these effects, but these known obstructions continue to be a major problem in the many studies that rely on temperature-based measurements.

The effects of this interference with temperature-based CMB studies can lead to erroneous lensing measurements, said Emmanuel Schaan, a postdoctoral researcher and Owen Chamberlain Postdoctoral Fellow in the Physics Division at the Department of Energy's Lawrence Berkeley National Laboratory (Berkeley Lab).

“You can be wrong and not know it,” Schaan said. “The existing methods don't work perfectly – they are really limiting.”

To address this problem, Schaan teamed up with Simone Ferraro, a Divisional Fellow in Berkeley Lab's Physics Division, to develop a way to improve the clarity and accuracy of CMB lensing measurements by separately accounting for different types of lensing effects.

“Lensing can magnify or demagnify things. It also distorts them along a certain axis so they are stretched in one direction,” Schaan said.

The researchers found that a certain lensing signature called shearing, which causes this stretching in one direction, seems largely immune to the foreground “noise” effects that otherwise interfere with the CMB lensing data. The lensing effect known as magnification, meanwhile, is prone to errors introduced by foreground noise. Their study, published May 8 in the journal Physical Review Letters, notes a “dramatic reduction” in this error margin when focusing solely on shearing effects.

The sources of the lensing, which are large objects that stand between us and the CMB light, are typically galaxy groups and clusters that have a roughly spherical profile in temperature maps, Ferraro noted, and the latest study found that the emission of various forms of light from these “foreground” objects only appears to mimic the magnification effects in lensing but not the shear effects.

“So we said, 'Let's rely only on the shear and we'll be immune to foreground effects,'” Ferraro said. “When you have many of these galaxies that are mostly spherical, and you average them, they only contaminate the magnification part of the measurement. For shear, all of the errors are basically gone.”

He added, “It reduces the noise, allowing us to get better maps. And we're more certain that these maps are correct,” even when the measurements involve very distant galaxies as foreground lensing objects.

The new method could benefit a range of sky-surveying experiments, the study notes, including the POLARBEAR-2 and Simons Array experiments, which have Berkeley Lab and UC Berkeley participants; the Advanced Atacama Cosmology Telescope (AdvACT) project; and the South Pole Telescope – 3G camera (SPT-3G). It could also aid the Simons Observatory and the proposed next-generation, multilocation CMB experiment known as CMB-S4 – Berkeley Lab scientists are involved in the planning for both of these efforts.

Increasingly large datasets from astrophysics experiments have led to more coordination in comparing data across experiments to provide more meaningful results. “These days, the synergies between CMB and galaxy surveys are a big deal,” Ferraro said.

In this study, researchers relied on simulated full-sky CMB data. They used resources at Berkeley Lab's National Energy Research Scientific Computing Center (NERSC) to test their method on each of the four different foreground sources of noise, which include infrared, radiofrequency, thermal, and electron-interaction effects that can contaminate CMB lensing measurements.

The study notes that cosmic infrared background noise, and noise from the interaction of CMB light particles (photons) with high-energy electrons have been the most problematic sources to address using standard filtering tools in CMB measurements. Some existing and future CMB experiments seek to lessen these effects by taking precise measurements of the polarization, or orientation, of the CMB light signature rather than its temperature.

“We couldn't have done this project without a computing cluster like NERSC,” Schaan said. NERSC has also proved useful in serving up other universe simulations to help prepare for upcoming experiments like DESI.

The method developed by Schaan and Ferraro is already being implemented in the analysis of current experiments' data. One possible application is to develop more detailed visualizations of dark matter filaments and nodes that appear to connect matter in the universe via a complex and changing cosmic web.

The researchers reported a positive reception to their newly introduced method.

“This was an outstanding problem that many people had thought about,” Ferraro said. “We're happy to find elegant solutions.”

NERSC is a DOE Office of Science User Facility.

DOE's Office of Science is the single largest supporter of basic research in the physical sciences in the United States, and is working to address some of the most pressing challenges of our time. For more information, please visit http://science.energy.gov.