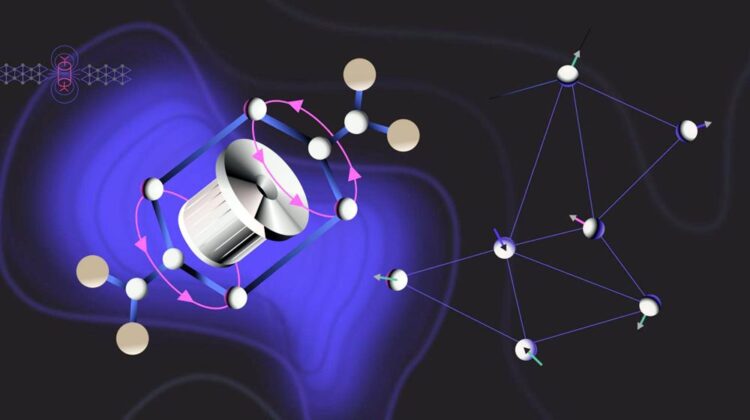 In 1973, physicist and later Nobel laureate Philip W. Anderson proposed a bizarre state of matter: the quantum spin liquid (QSL). Unlike the everyday liquids we know, the QSL actually has to do with magnetism – and magnetism has to do with spin.

What makes a magnet? It was a long-lasting mystery, but today we finally know that magnetism arises from a peculiar property of sub-atomic particles, like electrons. That property is called “spin”, and the best – yet grossly insufficient – way to think of it is like a child’s spinning-top toy.

What is important for magnetism is that spin turns every one of a material’s billions of electrons into a tiny magnet with its own magnetic “direction” (think north and south pole of a magnet). But the electron spins aren’t isolated; they interact with each other in different ways until they stabilize to form various magnetic states, thereby granting the material they belong to magnetic properties.

In a conventional magnet, the interacting spins stabilize, and the magnetic directions of each electron align. This results in a stable formation.

But in what is known as a “frustrated” magnet, the electron spins can’t stabilize in the same direction. Instead, they constantly fluctuate like a liquid – hence the name “quantum spin liquid.”

What is exciting about QSLs is that they can be used in a number of applications. Because they come in different varieties with different properties, QSLs can be used in quantum computing, telecommunications, superconductors, spintronics (a variation of electronics that uses electron spin instead of current), and a host of other quantum-based technologies.

But before exploiting them, we first have to gain a solid understanding of QSL states. To do this, scientists have to find ways to produce QSLs on demand – a task that has proven difficult so far, with only a few materials on offer as QSL candidates.

Publishing in PNAS, scientists led by Péter Szirmai and Bálint Náfrádi at László Forró’s lab at EPFL’s School of Basic Sciences have successfully produced and studied a QSL in a highly original material known as EDT-BCO. The system was designed and synthesized by the group of Patrick Batail at Université d’Angers (CNRS).

The structure of EDT-BCO is what makes it possible to create a QSL. The electron spins in the EDT-BCO form triangularly organized dimers, each of which has a spin-1/2 magnetic moment which means that the electron must fully rotate twice to return to its initial configuration. The layers of spin-1/2 dimers are separated by a sublattice of carboxylate anions centred by a chiral bicyclooctane. The anions are called “rotors” because they have conformational and rotational degrees of freedom.

The unique rotor component in a magnetic system makes the material special amongst QSL candidates, representing a new material family. “The subtle disorder provoked by the rotor components introduces a new handle upon the spin system,” says Szirmai.

The scientists and their collaborators employed an arsenal of methods to explore the EDT-BCO as a QSL material candidate: density functional theory calculations, high-frequency electron spin resonance measurements (a trademark of Forró’s lab), nuclear magnetic resonance, and muon spin spectroscopy. All of these techniques explore the magnetic properties of EDT-BCO from different angles.

All the techniques confirmed the absence of long-range magnetic order and the emergence of a QSL. In short, EDT-BCO officially joins the limited ranks of QSL materials and takes us a step further into the next generation of technologies. As Bálint Náfrádi puts it: “Beyond the superb demonstration of the QSL state, our work is highly relevant, because it provides a tool to obtain additional QSL materials via custom-designed functional rotor molecules.”