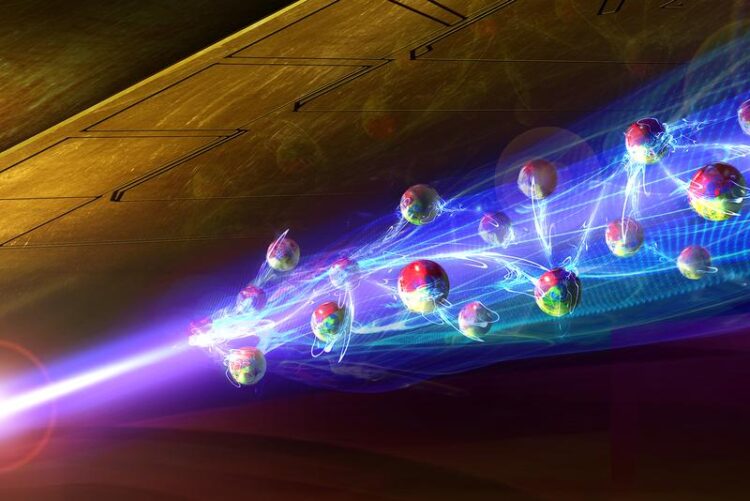 The atoms are polarized by the beam of light and start to attract each other.
© Harald Ritsch / TU Wien

Using light, atoms can be made to attract each other. A team from Vienna and Innsbruck was able to measure this binding state of light and matter for the first time.

A very special bonding state between atoms has been created in the laboratory for the first time: With a laser beam, atoms can be polarised so that they are positively charged on one side and negatively charged on the other. This makes them attract each other creating a very special bonding state – much weaker than the bond between two atoms in an ordinary molecule, but still measurable. The attraction comes from the polarised atoms themselves, but it is the laser beam that gives them the ability to do so – in a sense, it is a “molecule” of light and matter.

Theoretically, this effect has been predicted for a long time, but now scientists at the Vienna Center for Quantum Science and Technology (VCQ) at TU Wien, in cooperation with the University of Innsbruck, have succeeded in measuring this exotic atomic bond for the first time. This interaction is useful for manipulating extremely cold atoms, and the effect could also play a role in the formation of molecules in space. The results have now been published in the scientific journal “Physical Review X”.

In an electrically neutral atom, a positively charged atomic nucleus is surrounded by negatively charged electrons, which surround the atomic nucleus much like a cloud. “If you now switch on an external electric field, this charge distribution shifts a little,” explains Prof. Philipp Haslinger, whose research at the Atominstitut at TU Wien is supported by the FWF START programme. “The positive charge is shifted slightly in one direction, the negative charge slightly in the other direction, the atom suddenly has a positive and a negative side, it is polarised.”

Light is just an electromagnetic field that changes very rapidly, so it is also possible to create this polarisation effect with laser light. When several atoms are next to each other, the laser light polarises them all in exactly the same way – positive on the left and negative on the right, or vice versa. In both cases, two neighbouring atoms turn different charges towards each other, leading to an attractive force.

Experiments with the atom trap

“This is a very weak attractive force, so you have to conduct the experiment very carefully to be able to measure it,” says Mira Maiwöger from TU Wien, the first author of the publication. “If atoms have a lot of energy and are moving quickly, the attractive force is gone immediately. This is why a cloud of ultracold atoms was used.”

The atoms are first captured and cooled in a magnetic trap on an atom chip, a technique, which was developed at the Atominstitut in the group of Prof. Jörg Schmiedmayer. Then the trap is switched off and releases the atoms in free fall. The atom cloud is ‘ultracold’ at less than a millionth of a Kelvin, but it has enough energy to expand during the fall. However, if the atoms are polarized with a laser beam during this phase and thus an attractive force is created between them, this expansion of the atomic cloud is slowed down – and this is how the attractive force measured.

“Polarising individual atoms with laser beams is basically nothing new,” says Matthias Sonnleitner, who laid the theoretical foundation for the experiment. “The crucial thing about our experiment, however, is that we have succeeded for the first time in polarising several atoms together in a controlled way, creating a measurable attractive force between them.”

This attractive force is a complementary tool for controlling cold atoms. But it could also be important in astrophysics: “In the vastness of space, small forces can play a significant role,” says Philipp Haslinger. “Here, we were able to show for the first time that electromagnetic radiation can generate a force between atoms, which may help to shed new light on astrophysical scenarios that have not yet been explained.”