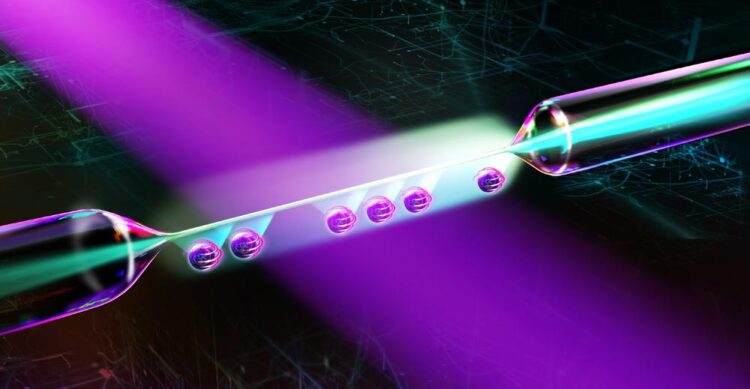 Artistic illustration of the nano-repeater. Light passes through an ultrathin glass fiber and
protrudes a bit beyond its surface. Atoms near the fiber are optically excited and set into
clockwise rotation. Thanks to the special properties of the light field around the ultrathin
glass fiber, the atoms only amplify the light when it travels from left to right. (Copyright: HU
Berlin)

Researchers at the Humboldt-Universität zu Berlin have developed a nano-repeater that amplifies light in only one direction.

Today, optical fibers are the backbone of our information society. However, in order to transmit data over long distances using light in fiber optic networks, the light must be amplified regularly to compensate for the losses that occur. So-called repeaters are used for this purpose. One important repeater design is based on amplifying light using the laser effect. For this purpose, atoms within the optical fiber are put into an excited state. They are then stimulated by the light to emit their stored energy in the form of additional light particles. Thus, more light comes out of the laser amplifier than what goes in.

Under ordinary circumstances, a laser amplifier would amplify forward and backward propagating light equally, since atoms are round particles and would therefore emit additional light particles equally in all directions. In fiber-optic networks, this can become a problem if, for example, spurious signals traveling in the backward direction are amplified.

Researchers led by quantum physicist Arno Rauschenbeutel at the Humboldt-Universität zu Berlin have now demonstrated a novel way to get atoms to amplify light in an optical fiber in only one direction. To do this, they forced the light guided in the optical fiber through a taper in which the optical fiber is a hundred times thinner than a human hair. The light in such an ultrathin optical fiber then protrudes a tiny bit beyond its surface – this is known as an evanescent light field. “The interaction between the light wave and the ultrathin glass fiber changes the oscillation state of the light field. The evanescent field then rotates like the rotor of a helicopter,” explains Arno Rauschenbeutel. The direction of rotation depends on whether the light in the optical fiber is moving forward or backward. In one direction, the light will oscillate clockwise; while in the other, it oscillates counterclockwise. The direction of propagation and the oscillation state of the light are thus linked.

If atoms are now made to rotate using laser light and coupled to the evanescent field of the ultrathin glass fiber, it is possible to make them behave differently with respect to the two light rotation directions. “The light field in the forward direction has the same sense of rotation as the atoms and is amplified by them. The light field in the backward direction, on the other hand, which rotates the other way around than the atoms, is not affected by them,” says Philipp Schneeweiß, who conducts research on the light amplifiers together with Arno Rauschenbeutel. The researchers demonstrated this effect in an experiment: They cooled a few hundred atoms to a temperature of a few millionths of a degree above absolute zero, so that they stood almost still and lined up along the ultrathin glass fiber. Although only about as many atoms were used as there are in a single insulin molecule, they still managed to amplify the light in one direction by a factor of two. In the opposite direction, however, the intensity of the light did not change.

The researchers are optimistic that the demonstrated principle will soon find practical applications. In addition to fiber optic networks, it could also be employed in superconducting quantum circuits that are used in certain quantum computers. “There, it would be particularly advantageous that our approach, unlike others, does not require magnetic fields, because these do not combine well with superconductors” explains Arno Rauschenbeutel.