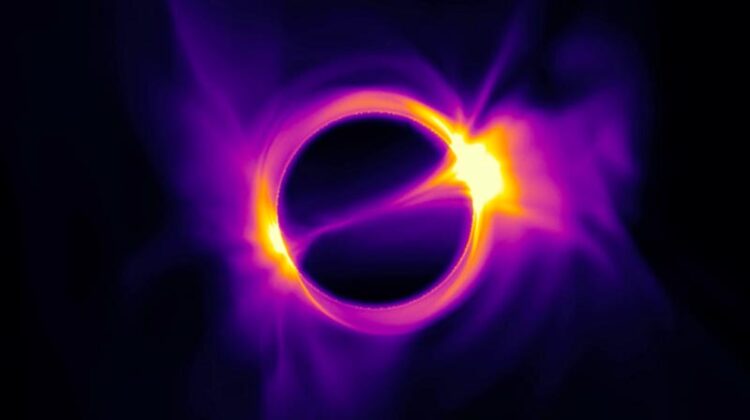 Reading between the lines to model our galaxy’s central black hole.

Looks can be deceiving. The light from an incandescent bulb seems steady, but it flickers 120 times per second. Because the brain only perceives an average of the information it receives, this flickering is blurred and the perception of constant illumination is a mere illusion.

While light cannot escape a black hole, the bright glow of rapidly orbiting gas (recall the images of M87’s black hole and Sgr A*) has its own unique flicker. In a recent paper, published in Astrophysical Journal Letters, Lena Murchikova, William D. Loughlin Member at the Institute for Advanced Study; Chris White of Princeton University; and Sean Ressler of University of California Santa Barbara were able to use this subtle flickering to construct the most accurate model to date of our own galaxy’s central black hole—Sagittarius A* (Sgr A*)—providing insight into properties such as its structure and motion.

For the first time, researchers have shown in a single model the full story of how gas travels in the center of the Milky Way—from being blown off by stars to falling into the black hole. By reading between the proverbial lines (or flickering light), the team concluded that the most likely picture of black hole feeding in the galactic center involves directly infalling gas from large distances, rather than a slow siphoning off of orbiting material over a long period of time.

“Black holes are the gatekeepers of their own secrets,” stated Murchikova. “In order to better understand these mysterious objects, we are dependent on direct observation and high-resolution modeling.”

Although the existence of black holes was predicted about 100 years ago by Karl Schwarzschild, based on Albert Einstein’s new theory of gravity, researchers are only now starting to probe them through observations.

In October 2021, Murchikova published a paper in Astrophysical Journal Letters, introducing a method to study black hole flickering on the timescale of a few seconds, instead of few minutes. This advance enabled a more accurate quantification of Sgr A*’s properties based on its flickering.

White has been working on the details of what happens to the gas near black holes (where the strong effects of general relativity are important) and how this affects the light coming to us. An Astrophysical Journal publication earlier this year summarizes some of his findings.

Ressler has spent years attempting to construct the most realistic simulations to date of the gas around Sgr A*. He has done this by incorporating observations of nearby stars directly into the simulations and meticulously tracking the material that they shed as it falls into the black hole.  His recent work culminated in an Astrophysical Journal Letter paper in 2020.

Murchikova, White, and Ressler then teamed up to compare the observed flickering pattern of Sgr A* with those predicted by their respective numerical models.

“The result turned out to be very interesting,” explained Murchikova. “For a long time, we thought that we could largely disregard where the gas around the black hole came from. Typical models imagine an artificial ring of gas, roughly donut shaped, at some large distance from the black hole. We found that such models produce patterns of flickering inconsistent with observations.”

Ressler’s stellar wind model takes a more realistic approach, in which the gas consumed by black holes is originally shed by stars near the galactic center. When this gas falls into the black hole, it reproduces the correct pattern of flickering. “The model was not built with the intent to explain this particular phenomenon. Success was by no means a guarantee,” commented Ressler. “So, it was very encouraging to see the model succeed so dramatically after years of work.”

“When we study flickering, we can see changes in the amount of light emitted by the black hole second by second, making thousands of measurements over the course of a single night,” explained White. “However, this does not tell us how the gas is arranged in space as a large-scale image would. By combining these two types of observations, it is possible to mitigate the limitations of each, thereby obtaining the most authentic picture.”

About the Institute
The Institute for Advanced Study has served the world as one of the leading independent centers for theoretical research and intellectual inquiry since its establishment in 1930, advancing the frontiers of knowledge across the sciences and humanities. From the work of founding IAS faculty such as Albert Einstein and John von Neumann to that of the foremost thinkers of the present, the IAS is dedicated to enabling curiosity-driven exploration and fundamental discovery.

Each year, the Institute welcomes more than 200 of the world’s most promising post-doctoral researchers and scholars who are selected and mentored by a permanent Faculty, each of whom are preeminent leaders in their fields. Among present and past Faculty and Members there have been 35 Nobel Laureates, 42 of the 60 Fields Medalists, and 22 of the 25 Abel Prize Laureates, as well as many MacArthur Fellows and Wolf Prize winners.

Video: Simulation of glowing gas around a black hole
https://www.eurekalert.org/multimedia/939331