A brake for spinning molecules 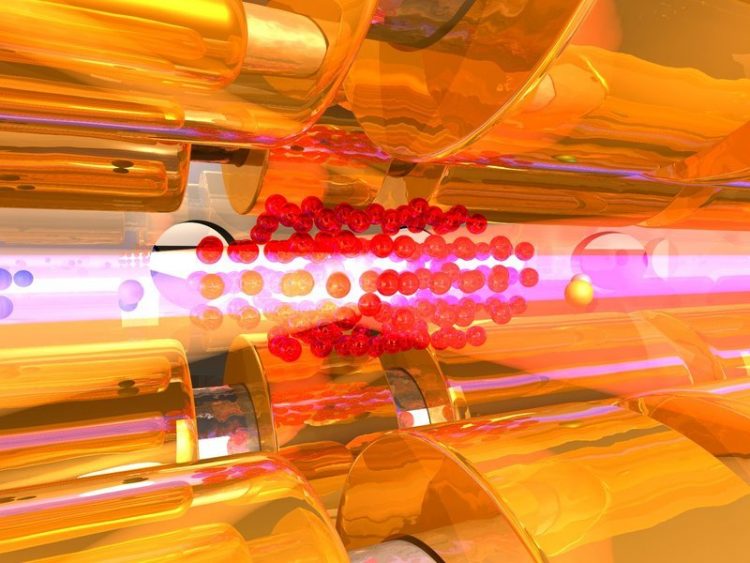 Ions in a gaseous crystal: An alternating field between rod-shaped electrodes confines magnesium and magnesium hydride ions (red spheres) in a trap. A laser beam is used to cool the particles until they solidify to a crystal in which the distances between the ions are much greater than in a mineral crystal. A German-Danish team of researchers is able to slow down the rotation of the molecular ions with a highly tenuous, cold helium gas (spheres to the left and right of the ion crystal). © J. R. Crespo/O. O. Versolato/MPI for Nuclear Physics

Chemical reactions taking place in outer space can now be more easily studied on Earth. An international team of researchers from the University of Aarhus in Denmark and the Max Planck Institute for Nuclear Physics in Heidelberg, discovered an efficient and versatile way of braking the rotation of molecular ions.

The spinning speed of these ions is related to a rotational temperature. Using an extremely tenuous, cooled gas, the researchers have lowered this temperature to about -265 °C. From this record-low value, the researchers could vary the temperature up to -210 °C in a controlled manner. Exact control of the rotation of molecules is not only of importance for studying astrochemical processes, but could also be exploited to shed more light on the quantum mechanical aspects of photosynthesis or to use molecular ions for quantum information technology.

Cold does not equal cold for physicists. This is because in physics, there is a different temperature associated with each type of motion that a particle can have. How fast molecules move through space determines the translational temperature, which comes closest to our everyday notion of temperature. However, there is also a temperature for the internal vibrations of a molecule, as well as for the rotational motion around their own axes. Similar to a stationary car with its engine running, the internal rotation (the engine, in this case) does not translate into motion before the clutch is released. In the case of molecules, the many microscopic collisions between the particles which constitute gases, fluids, and solids couple the various forms of motion with each other.

The different temperatures thus approach each other over time. Physicists then say that a thermal equilibrium has been established. However, how fast this equilibrium is reached depends on the collision rate, as well as on any external influences working against this equilibration. For example, the infrared radiation emanating from the contraction of an interstellar gas cloud can cause the rotation of molecules to quicken, even without changing the speed at which the molecules are travelling. These kinds of processes take a very long time in the emptiness of space, as there are very few collisions there.

The cooling method for the rotational temperature is quick and versatile

Time is totally irrelevant at cosmic dimensions but with physical experiments it is crucial. Indeed, physicists can nowadays reduce the flight speed of molecules relatively quickly to almost absolute zero at -273.15 °C. However, it takes several minutes or hours for the rotation of non-colliding particles to cool to a similar level, making some experiments almost impossible. This may be about to change.

“We have managed to cool down the rotation of molecular ions in milliseconds, and down to lower temperatures than previously possible,” says José R. Crespo López-Urrutia, Group Leader at the Max Planck Institute for Nuclear Physics. The researchers from the Max Planck Institute in Heidelberg and the group led by Michael Drewsen at Aarhus University froze molecular rotational motion at 7.5 K (or -265.65 °C). And not only that, as Oscar Versolato from the Max Planck Institute in Heidelberg, who played an important role in the experiments, explains: “With our methods we can choose and set a rotational temperature between about seven and 60 Kelvin, and are able to accurately measure this temperature in our experiments.” Unlike other methods, this cooling principle is very versatile, being applicable to many different molecular ions.

In their experiments, the team used a cloud of magnesium ions and magnesium hydride ions using methods pioneered in Aarhus. This ensemble was “confined” in an ion trap known as CryPTEx, which was developed by researchers at the Max Planck Institute for Nuclear Physics (see Background). The trap consists of four rod-shaped electrodes that are arranged in parallel, in pairs aligned one above the other and having opposite electrical polarities. A high-frequency alternating voltage is applied to the electrodes to confine the ions in the centre close to the longitudinal axis of the trap. The trap is cooled to a few degrees above absolute zero, and there is an excellent vacuum so that adverse collisions are very rare.

In the trap, the physicists cooled the magnesium ions using laser beams which, to put it simply, slow down the ions with their photon pressure. The magnesium hydride ions in turn cool because of their interaction with the magnesium ions. This allowed the researchers to cool the translational temperature of the cloud to minus 273 degrees Celsius until several hundred particles solidify to form a regular crystal. In such crystals, the distances between the particles are very large, in contrast to the situation in crystals familiar from minerals. The particles which the cold laser causes to emit light can thus be seen at their fixed positions under the optical microscope.

To apply a brake to the rotation of the molecular ions, and thus to reduce their rotational temperature, the team injected an extremely tenuous, cold helium gas into the trap. In the ion crystal, the helium atoms flying at a leisurely speed collide with the magnesium hydride ions rotating about their own axis trillions of times per second. The collisions cause the helium atoms to gradually slow down the molecular ions. “This process is similar to the tides,” explains José Crespo: “The rotating ion polarizing the neutral helium atom is a little bit like the moon producing the tidal bulges.” A dipole is thus induced in the helium atom, which tugs at the rotating molecular ion such that it rotates a little slower.

The helium atoms in the experiment mediate between the various temperatures as they transfer translational kinetic energy to the molecular ions in some collisions and remove rotational energy in others. This effect is also exploited by the team to heat the rotational motion of the molecular ions through the amplification of the regular micro-motion of trapped particles.

Crystal size and shape control the heating of molecular ions

The physicists increase the micro-motion velocity of the molecular ions by varying the shape and size of the ion crystal in the trap: they knead the crystal as it were by means of the alternating voltage which is applied to the trap electrodes. The alternating field that the electrodes produce is equal to zero only along the trap axis. The further the molecular ions are located away from this axis, the more they feel the oscillating force of the field and the more violent is their micro-motion. Part of the kinetic energy of the swirling molecular ions is absorbed by the helium atoms in collisions, and these atoms in turn transfer it to the rotational motion of the ions, thus raising their rotational temperature.

Accurate control of quantum states is a prerequisite for many experiments

“Being able to control the rotation of the molecular ions and thus the quantum state so accurately is important for many experiments,” says José Crespo. Scientists can therefore recreate in the laboratory chemical reactions that take place in space if they can bring the reactants into the same quantum state in which they drift through interstellar space. Only in this way can one quantitatively understand how molecules are formed in space, and ultimately explain how interstellar clouds, the hotbeds of stars and planets, evolve both physically and chemically.

This speed control knob for rotating molecules could also contribute to a better understanding of the quantum physics of photosynthesis. In photosynthesis, plants use the chlorophyll in their leaves to collect sunlight, whose energy is ultimately used to form sugars and other molecules. It is not yet entirely clear how the energy required for this is quantum mechanically transferred within the chlorophyll molecules. To understand this, the researchers must once again very accurately control and measure the quantum states and the rotation of the molecules involved. The findings thus obtained could serve as the basis for imitating or optimising the photosynthesis at some time in the future in order to supply us with energy.

Last but not least, this control is a prerequisite for quantum simulations as well as for many concepts of universal quantum computations. In quantum simulations physicists mimic a quantum mechanical system that is difficult, or even impossible, to examine directly with another quantum system that is well-known and controllable. In universal quantum computers which physicists are trying to develop, the aim is to process information extremely quickly using the quantum states of particles. Molecules are possible candidates for this, their chances now growing as molecular rotation can be quantum mechanically controlled.

“Our method for the cooling of the rotation of molecules opens up new possibilities in a variety of different fields,” says José Crespo. His team, too, will now use the new method to investigate open questions about the quantum mechanical world.

CryPTEx – a trap for cold ions

CryPTEx, the Cryogenic Paul Trap Experiment, is a cryogenically cooled trap setup developed and built by the team of José R. Crespo López-Urrutia at the Max Planck Institute for Nuclear Physics (MPIK) in Heidelberg based on a trap design by collaborator Michael Drewsen of Aarhus University (AU) in order to investigate highly charged ions (HCI). Production, trapping and spectroscopy with HCI are the fields of expertise of the Max Planck group, which uses various ultrahigh vacuum cryogenic settings for their investigation. These specific conditions required for HCI studies are also very beneficial for the study of molecular ions. The Heidelberg team then moved CryPTEx to Aarhus and commissioned the apparatus there together with the local team. Trapping and manipulation of molecular ions is the specialty of the Aarhus group, which has pioneered many of the laser-based techniques now used in the field. Drewsen saw the novel opportunities for cooling molecular ions in the cryogenic setting, including the application of an ultra-tenuous helium buffer gas. Thus, CryPTEx stayed in Aarhus for one year, where the young scientists from both groups carried out long series of experiments and tested new ideas. During those experiments, ion crystallisation and buffer gas cooling could be achieved simultaneously over a wide range of effective temperatures, down to the lowest ever recorded for a molecular ion.