Home / Physics and Astronomy / A better black hole laser may prove a circuitous “Theory of Everything”
12.10.2021 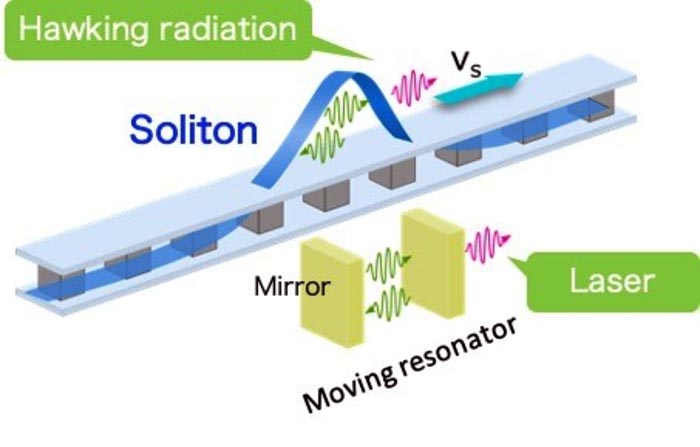 The fundamental forces of physics govern the matter comprising the Universe, yet exactly how these forces work together is still not fully understood. The existence of Hawking radiation — the particle emission from near black holes — indicates that general relativity and quantum mechanics must cooperate. But directly observing Hawking radiation from a black hole is nearly impossible due to the background noise of the Universe, so how can researchers study it to better understand how the forces interact and how they integrate into a “Theory of Everything”?

According to Haruna Katayama, a doctoral student in Hiroshima University’s Graduate School of Advanced Science and Engineering, since researchers cannot go to the Hawking radiation, Hawking radiation must be brought to the researchers. She has proposed a quantum circuit that acts as a black hole laser, providing a lab-bench black hole equivalent with advantages over previously proposed versions. The proposal was published on Sept. 27 Scientific Reports.

“In this study, we devised a quantum-circuit laser theory using an analogue black hole and a white hole as a resonator,” Katayama said.

A white hole is a theoretical partner of a black hole that emits light and matter in equal opposition to light and matter a black hole consumes. In the proposed electric circuit, a metamaterial engineered to allow faster-than-light motion spans the space between horizons, near which Hawking radiation is emitted.

“The property of superluminal speed is impossible in a normal medium established in an ordinary circuit,” Katayama said. “The metamaterial element makes it possible for Hawking radiation to travel back and forth between horizons, and the Josephson effect — which describes a continuous flow of current that propagates without voltage — plays an important role in amplifying the Hawking radiation through the mode conversion at the horizons, mimicking the behavior between the white and black holes.”

Katayama’s proposal builds on previously proposed optical black hole lasers by introducing the metamaterial that allows for superluminal speed and exploiting the Josephson effect to amplify the Hawking radiation. The resulting quantum circuit induces a soliton, a localized, self-reinforcing waveform that maintains speed and shape until external factors collapse the system.

“Unlike previously proposed black hole lasers, our version has a black hole/white hole cavity formed within a single soliton, where Hawking radiation is emitted outside of the soliton so we can evaluate it,” Katayama said.

Hawking radiation is produced as entangled particle pairs, with one inside and one outside the horizon. According to Katayama, the observable entangled particle bears the shadow of its partner particle. As such, the quantum correlation between the two particles can be determined mathematically without the simultaneous observation of both particles.

“The detection of this entanglement is indispensable for the confirmation of Hawking radiation,” Katayama said.

“In the future, we would like to develop this system for quantum communication between distinct spacetimes using Hawking radiation,” Katayama said, noting the system’s scalability and controllability as advantages in developing quantum technologies.

The Japan Society for the Promotion of Science supported this research.

Since its foundation in 1949, Hiroshima University has striven to become one of the most prominent and comprehensive universities in Japan for the promotion and development of scholarship and education. Consisting of 12 schools for undergraduate level and 4 graduate schools, ranging from natural sciences to humanities and social sciences, the university has grown into one of the most distinguished comprehensive research universities in Japan.
English website: https://www.hiroshima-u.ac.jp/en