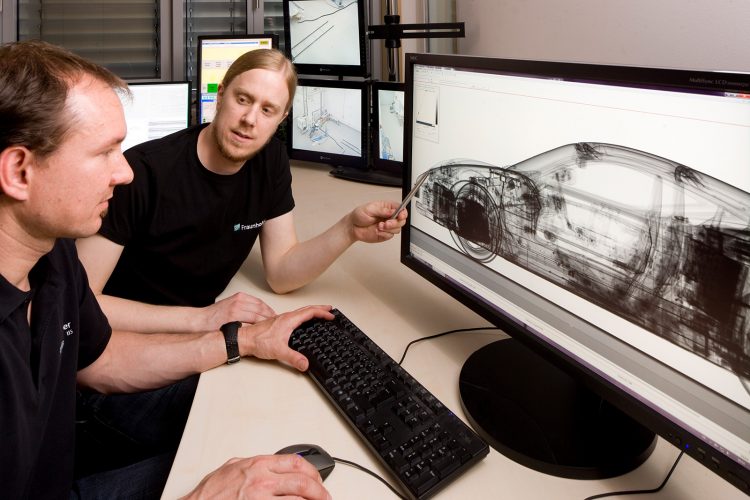 Computed tomography with X-rays is nowadays playing an important role even outside of medicine. For example, for product development for industrial applications.

However, computed tomography has so far been limited to smaller and simpler objects, especially in the field of high energy, due to unavailable suitable reconstruction and correction algorithms and sensors. The existing large CT systems are severely limited in their scope of functions for large objects.

Researchers from the Fraunhofer Institute for Integrated Circuits IIS have now made significant progress in this regard. Michael Salamon, Nils Reims and Dr. Michael Böhnel have developed a technology that also illuminates very large objects and generates high-resolution 3D images.

As an X-ray source, the researchers use a linear accelerator with nine mega-electron volts (MeV) and combine it with an X-ray camera that works with a sensitive length of four meters and 10,000 pixels.

For the first time, objects with a diameter of 3.20 meters and a height of five meters can be recorded with three-dimensional X-rays – special technology in which a large object is recorded in parts also allows the scanning of even larger objects. This makes the system the currently largest CT system in the world.

The objects are rotated on a heavy duty turntable. The camera and the radiation source scan the object synchronously in vertical motion, line by line. Due to the rotation of the turntable, the camera records many viewing angles, thereby creating the basis for the three-dimensional representation.

With the XXL-CT, electric cars, for example, can be analyzed after a crash test. Previ-ously, the objects had to be disassembled in a time-consuming process in order to ana-lyze the structure and inner workings. Non-destructive X-ray inspection now makes it possible to perform a detailed analysis of the structure and materials of the object that were previously inaccessible, such as entire battery modules. The strong X-rays even make structures in densely packed batteries visible.

The quality of the 3D images has impressed even skeptics. Group Manager Salamon explains: “Previously, it was thought that high-energy structures would no longer be recognizable, since low-absorption materials tend to be overshadowed by high-absorption ones. The common opinion was that a lot of KV turns everything gray. With our development, we’ve proven the opposite.”

In order to maintain the required quality of the 3D X-ray image, the researchers had to work on further innovations in addition to the linear accelerator and the large line X-ray camera. Together with their industrial partner MT Mechatronics, they have developed a design that enables extremely precise positioning even with objects weighing several tons. The processing of the X-ray data has also been optimized such that it can be au-tomated with as little user interaction as possible, thereby enabling future use in the industrial environment.

Another application example is the inspection of sea freight containers. Many freight containers are already X-rayed in ports, but only in two dimensions. Thanks to 3D X-ray technology, even small objects inside the containers become clearly visible. Especially for security agencies which inspect freight containers for explosives or weapons, as well as for customs authorities that are looking for contraband, the IIS technology provides a decisive added value.

In addition to its use in industry, XXL computed tomography opens up many more appli-cations. As a result, historical objects such as musical instruments for which cutting open and disassembling is out of the question can be X-rayed. In a particularly spectacular action, the Fraunhofer specialists scanned a 65-million-year-old dinosaur skull. The skull of the Tyrannosaurus Rex remained in a box during the X-ray procedure, together with the surrounding soil in which the paleontologists had found it.

The Fraunhofer research team is already planning the next step: in a gantry CT, linear accelerator and camera are to circle around the object. The object itself remains still and does not have to be positioned vertically. A prototype is currently being developed in cooperation with MT Mechatronics.