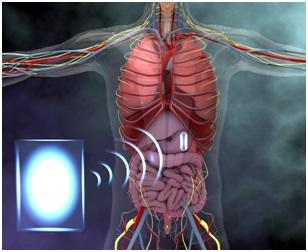 This is an artistic interpretation of how an electronic device in the stomach could be powered wirelessly. Credit: Ella Maru Studio / Giovanni Traverso / Abubakar Abid

Imagers, gastric pacemakers and other diagnostic and therapeutic tools could someday transform the way diseases of the gastrointestinal tract are measured and treated. But in order for these electronic devices to work, they need a power source.

Traditional power sources, such as batteries, can be incompatible with the mucosal lining of the gastrointestinal tract and have a limited lifespan within the body. A more promising possibility is to power electronic devices from outside the body.

In a new study published in Scientific Reports, investigators from Brigham and Women's Hospital, Massachusetts Institute of Technology and The Charles Stark Draper Laboratory report that an ingestible electronic capsule, complete with a capsule-sized antenna capable of receiving a radio signal wirelessly, can safely power a device in the gastrointestinal tract in preclinical models. The new work makes wireless medical electronics for treating the gastrointestinal tract one step closer to reality.

“Electronic devices that can be placed in the gastrointestinal tract for prolonged periods of time have the potential to transform how we evaluate and treat patients.

This work describes the first example of remote, wireless transfer of power to a system in the stomach in a large preclinical animal model — a critical step toward bringing these devices into the clinic,” said co-corresponding author Carlo “Gio” Traverso, MD, PhD, a gastroenterologist and biomedical engineer at BWH.

To test whether mid-field coupling could help deliver power from outside the body into the gastrointestinal tract, the research team designed antennas capable of operating efficiently in tissue. They then placed one antenna outside of the body and the other in the esophagus, stomach and colon of a swine model. They were able to transmit power levels of 37.5 uW, 123 uW and 173 uW, respectively, all of which are sufficient to wirelessly power a range of medical devices from outside of the body.

“We are very excited about this work which we feel can someday offer many new opportunities for oral drug delivery of different molecules,” said co-corresponding author Robert Langer, Institute Professor from the Harvard-MIT Division of Health Sciences and Technology.

“In further work, we would like to expand on these measurements by characterizing the effects of animal size, antenna depth, orientation and more on transmission efficiency, and focus on propagating fields – or the way power travels – to make transmission even more efficient,” said Traverso.

This work was made possible in part through funding from the National Institutes of Health and a Draper Fellowship. The authors declare no competing financial interests or other interests that might be perceived to influence the results and/or discussion reported in this article.

Co-pilot at the bedside