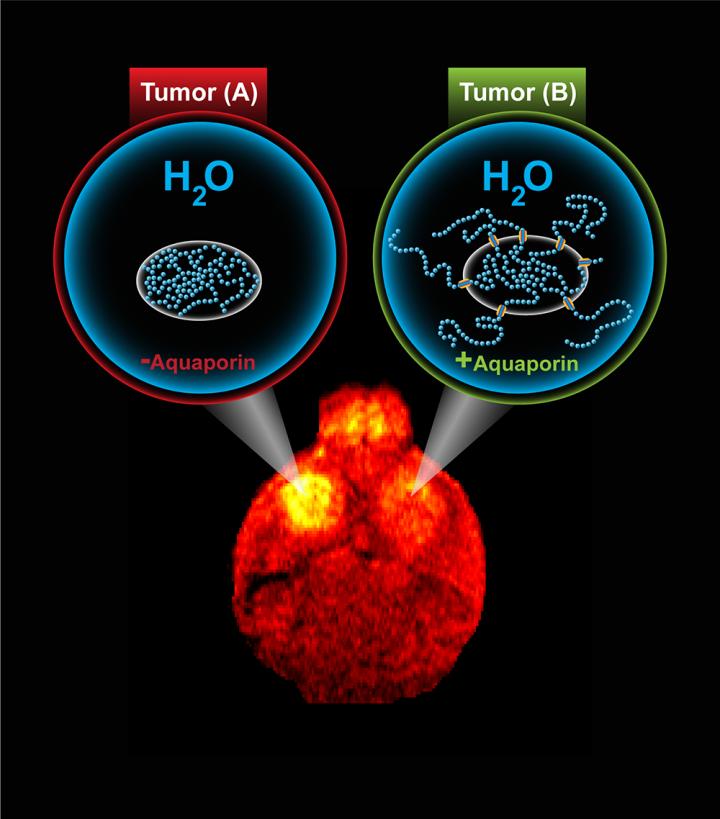 This is an illustration of aquaporin's effect on cells. Credit: M. Shapiro Laboratory/Caltech

Researchers in the laboratory of Mikhail Shapiro, assistant professor of chemical engineering and Heritage Medical Research Institute Investigator, have invented a new method to link magnetic resonance imaging (MRI) signals to gene expression in cells–including tumor cells–in living tissues. The technique, which eventually could be used in humans, would allow gene expression to be monitored non-invasively, requiring no surgical procedures such as biopsies.

The work appears in the December 23 online edition of the journal Nature Communications.

In MRI, hydrogen atoms in the body–atoms that are mostly contained in water molecules and fat–are excited using a magnetic field. The excited atoms, in turn, emit signals that can be used to create images of the brain, muscle, and other tissues, which can be distinguished based on the local physical and chemical environment of the water molecules. While this technique is widely used, it usually provides only anatomical snapshots of tissues or physiological functions such as blood flow rather than observations of the activity of specific cells.

“We thought that if we could link signals from water molecules to the expression of genes of interest, we could change the way the cell looks under MRI,” says Arnab Mukherjee, a postdoctoral scholar in chemical engineering at Caltech and co-lead author on the paper.

The group turned to a protein that naturally occurs in humans, called aquaporin. Aquaporin sits within the membrane that envelops cells and acts as a gatekeeper for water molecules, allowing them to move in and out of the cell. Shapiro's team realized that increasing the number of aquaporins on a given cell made it stand out in MRI images acquired using a common clinical technique called diffusion-weighted imaging, which is sensitive to the movement of water molecules.

They then linked aquaporin to genes of interest, making it what scientists call a reporter gene. This means that when a gene of interest is turned on, the cell will overexpress aquaporin, making the cell look darker under diffusion-weighted MRI.

The researchers showed that this technique was successful in monitoring gene expression in a brain tumor in mice. After implanting the tumor, they gave the mice a drug to trigger the tumor cells to express the aquaporin reporter gene, which made the tumor look darker in MRI images.

“Overexpression of aquaporin has no negative impact on cells because it is exclusive to water and simply allows the molecules to go back and forth across the cell membrane,” Shapiro says. Under normal physiological conditions the number of water molecules entering and exiting an aquaporin-expressing cell is the same, so that the total amount of water in each cell does not change. “Aquaporin is a very convenient way to genetically change the way that cells look under MRI.”

Though the work was done in mice, it has the potential for clinical translation, according to Shapiro. Aquaporin is a naturally occurring gene and will not cause an immune reaction. Previously developed reporter genes for MRI have been much more limited in their capabilities, requiring the use of specific metals that are not always available in some tissues.

“An effective reporter gene for MRI is a 'holy grail' in biomedical imaging because it would allow cellular function to be observed non-invasively,” says Shapiro. “Aquaporins are a new way to think about this problem. It is remarkable that simply allowing water molecules to more easily get into and out of cells in a tissue gives us the ability to remotely see those cells in the middle of the body.”

The paper is titled “Non-invasive imaging using reporter genes altering cellular water permeability.” In addition to Shapiro and Mukherjee, other coauthors include Caltech graduate students Di Wu (MS '16 and co-lead author) and Hunter Davis. The work was funded by the Dana Foundation, a Burroughs Wellcome Career Award at the Scientific Interface, the Heritage Medical Research Institute, and the National Institutes of Health.