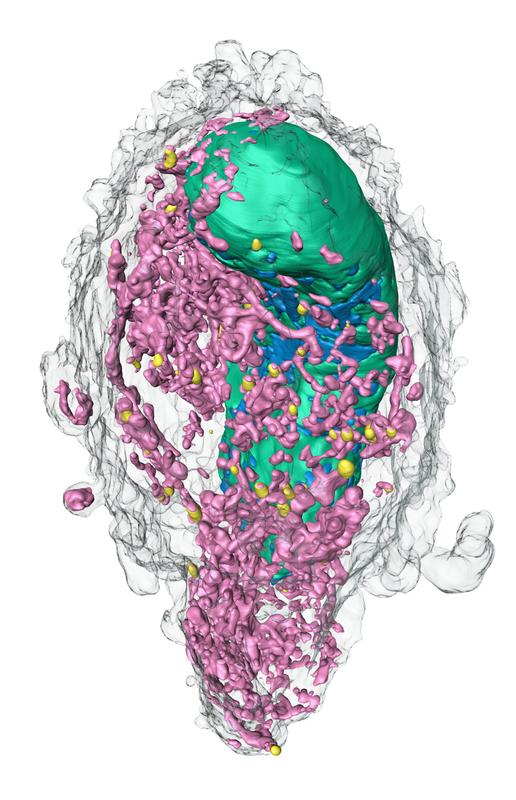 Advancing research into how viruses penetrate and act on human cells requires powerful cell imaging approaches. Soft X-ray microscopy is particularly suitable but has so far not been widely available. A pan-European research project called “Compact Cell-Imaging Device” with Heidelberg participation seeks to develop this technology for extensive application in medical research.

How do viral pathogens succeed in penetrating human cells? Which cellular mechanisms do they use to multiply efficiently and, in doing so, how do they change the structure of their host cell? These questions are the focus of a pan-European research project called “Compact Cell-Imaging Device” (CoCID), in which Heidelberg scientists are playing a major role. In order to advance research into viral diseases, the aim of the project is to develop a particularly suitable cell-imaging method – which has so far been of limited access to researchers – for extensive application in medical research.

A particularly high-performance method of cell-imaging is soft X-ray microscopy (SXM), explains Dr Venera Weinhardt from the Centre for Organismal Studies (COS) of Heidelberg University. A physicist, she specialises in innovative X-ray procedures and collaborates with Prof. Dr Ralf Bartenschlager, who is head of the Molecular Virology division at the Department of Infectious Diseases of Heidelberg University Hospital. “SXM makes use of the special properties of the soft X-ray spectrum in order to look into the interior of a single intact cell and generate three-dimensional images of its whole internal structure. That also reveals the changes induced by viral infections,” says Dr Weinhardt. For this reason, soft X-ray microscopy clearly sets itself apart from traditional methods such as electron microscopy, which can visualise individual parts but not the whole cell interior.

So far SXM can only be performed at five research stations worldwide, where the illumination required for this type of microscopy is supplied by huge particle accelerators called synchrotrons. The main feature of CoCID therefore lies in further developing a miniaturised soft X-ray approach which has been patented by SiriusXT, a spin-out company from University College Dublin. It is intended for extensive use in future. “The SXM microscope developed by SiriusXT performs just as well but is many times smaller, less expensive, and still very fast,” explains Dr Weinhardt. The scientist will make a major contribution to optimising the prototype through benchmarking and comparisons with other systems for daily application.

From virological standpoints, the Heidelberg researchers are particularly interested in the potential of the new methodology when researching SARS-CoV-2. Prof. Bartenschlager’s working group is primarily concerned with how the virus reprograms its host cells. According to him, SXM images created under the leadership of Dr Weinhardt at Lawrence Berkeley National Laboratory in California (USA) are already promising in this respect. It also proved possible to generate three-dimensional images of cells infected with SARS-CoV-2 in the framework of a cooperation agreement with the European Molecular Biology Laboratory (EMBL) in Heidelberg. “Through working with these images we have a pretty good idea of what factors play a role with imaging in connection with the virus-infected cells and we can pass these findings on to the CoCID consortium. As soon as the soft X-ray prototype from Dublin is up and running we will also deliver samples of infected cells, enable a direct comparison with available images and provide support in interpreting data,” says Prof. Bartenschlager.

The Heidelberg experts anticipate that a soft X-ray microscopy available for daily use will have clear advantages over existing procedures. For example, the current SXM facilities can only deal with a fraction of the inquiries that come in. Prof. Bartenschlager: “We can’t afford long waits or a time-intensive method when it comes to novel viruses such as SARS-CoV-2, which we learn something new about and which changes on a daily basis.”

Besides scientists from Heidelberg University, the “Compact Cell-Imaging Device” project also involves researchers from Finland, Ireland and Spain. The four-year funding for the project, which started at the beginning of this year, is taking place in the context of the Horizon 2020 programme of the European Union.