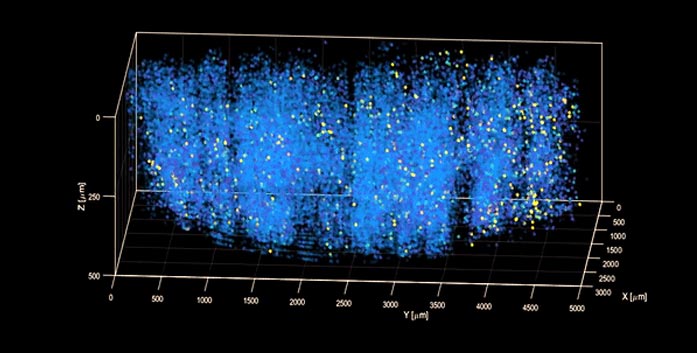 The neuroactivity of one million neurons in the mouse brain, at unprecedented resolution
Credit: Alipasha Vaziri

Capturing the intricacies of the brain’s activity demands resolution, scale, and speed—the ability to visualize millions of neurons with crystal clear resolution as they actively call out from distant corners of the cortex, within a fraction of a second of one another.

Now, researchers have developed a microscopy technique that will allow scientists to accomplish this feat, capturing detailed images of activity of a vast number of cells across different depths in the brain at high speed and with unprecedented clarity. Published in Nature Methods, the research demonstrates the power of this innovation, dubbed light beads microscopy, by presenting the first vivid functional movies of the near-simultaneous activity of one million neurons across the mouse brain.

“Understanding the nature of the brain’s densely interconnected network requires developing novel imaging techniques that can capture the activity of neurons across vastly separated brain regions at high speed and single-cell resolution,” says Rockefeller’s Alipasha Vaziri. “Light beads microscopy will allow us to investigate biological questions in a way that had not been possible before.”

A focus on microscopy

Whether it’s whiskers that seek hazards by flicking to and fro, or hand-eye-coordination that helps a human hit a baseball, animals rely upon the call and response of the sensory, motor, and visual regions of the brain. Cells from far reaches of the cortex coordinate this feat through a web of neuroactivity that weaves distant regions of the brain into interconnected symphonies.

Scientists are only now beginning to untangle this web, with the help of cutting-edge microscope technology. The combination of two-photon scanning microscopy and fluorescent tags is the gold standard when it comes to imaging the activity of neurons within less transparent brain tissues, which are prone to scattering light. It involves firing a focused laser pulse at a tagged target.  A few nanoseconds after the pulse hits its mark, the tag emits fluorescent light that can be interpreted to give scientists an idea of the level of neuroactivity detected.

But two-photon microscopy suffers from a fundamental limitation. Neurobiologists need to record simultaneous interactions between the sensory, motor, and visual regions of the brain, but it is difficult to capture the activity in such a broad swath of the brain without sacrificing resolution or speed.

Designing an ideal microscope for visualizing interactions between far apart brain regions can feel like plugging holes in a sinking ship. In the interests of high resolution, scientists often must sacrifice scale—or zoom out to take in the larger structure, at the cost of resolution. This can be overcome by snapping a series of high-resolution images from distant corners of the brain separately, later stitching them together. But then speed becomes an issue.

“We need to capture many neurons at distant parts of the brain at the same time at high resolution,” Vaziri says. “These parameters are almost mutually exclusive.”

Light beads microscopy offers a creative solution and pushes the limits of imaging speed to what’s maximally obtainable – only limited by physical nature of fluorescence itself. This is done by eliminating the “deadtime” between sequential laser pulses when no neuroactivity is recorded and at the same time the need for scanning.

The technique involves breaking one strong pulse into 30 smaller sub pulses – each at a different strength – that dive into 30 different depths of scattering mouse brain but induce the same amount of fluorescence at each depth. This is accomplished with a cavity of mirrors that staggers the firing of each pulse in time and ensures that they can all reach their target depths via a single microscope focusing lens. With this approach, the only limit to the rate at which samples can be recorded is the time that it takes the fluorescent tags to flare. That means broad swaths of the brain can be recorded within the same time it would take a conventional two-photon microscope to capture a mere smattering of brain cells.

Vaziri and colleagues then put light beads microscopy to the test by integrating it into a microscopy platform that allows for optical access to a large brain volume enabling the recording of the activity of more than one million neurons across the entire cortex of the mouse brain for the first time.

Because Vaziri’s method is an innovation that builds on two photon microscopy, many labs already have or can commercially obtain the technologies necessary to perform light beads microscopy, as described in the paper. Labs that are less familiar with these techniques could benefit from a simplified, self-contained module that Vaziri is currently developing for more widespread use. “There’s no good reason why we didn’t do this five years ago,” he says. “It would have been possible—the microscope and laser technology existed. No one thought of it.”

Ultimately, the goal is to complement rather than replace current techniques. “There are neurobiological questions for which the standard two-photon microscope is sufficient,” Vaziri says. ” But light beads microscopy allows us to address questions that existing methods cannot.”