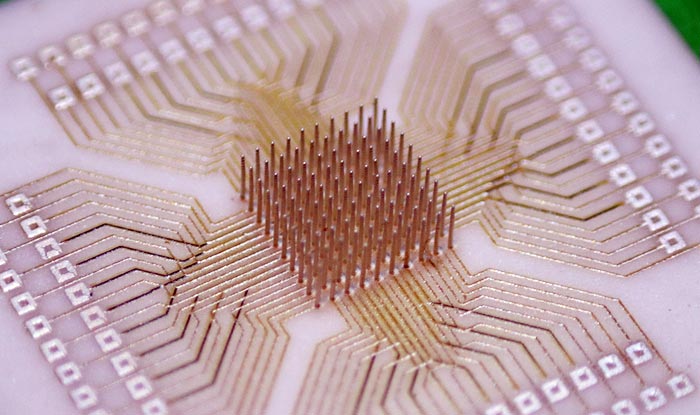 Carnegie Mellon University researchers have pioneered the CMU Array—a new type of microelectrode array for brain computer interface platforms. It holds the potential to transform how doctors are able to treat neurological disorders.

3D printed at the nanoscale, the ultra-high-density microelectrode array (MEA) is fully customizable. This means that one day, patients suffering from epilepsy or limb function loss due to stroke could have personalized medical treatment optimized for their individual needs.

“Aerosol Jet 3D printing offered three major advantages,” Panat explained. “Users are able to customize their MEAs to fit particular needs; the MEAs can work in three dimensions in the brain; and the density of the MEA is increased and therefore more robust.”

MEA-based BCIs connect neurons in the brain with external electronics to monitor or stimulate brain activity. They are often used in applications like neuroprosthetic devices, artificial limbs, and visual implants to transport information from the brain to extremities that have lost functionality. BCIs also have potential applications in treating neurological diseases such as epilepsy, depression, and obsessive-compulsive disorder. However, existing devices have limitations.

There are two types of popular BCI devices. The oldest MEA is the Utah array, developed at the University of Utah and patented in 1993. This silicone-based array uses a field of tiny pins, or shanks, that can be inserted directly into the brain to detect electrical discharge from neurons at the tip of each pin.

Another type is the Michigan array which is printed on flat, delicate silicone chips. It reads the electrons as they fire across the chips. Due to design limitations, both of these arrays are only able to record on a two-dimensional plane. That means that they cannot be customized to fit the needs of each patient or application.

The most important aspect of an MEA is its three-dimensional sampling ability, which is limited by the density of microelectrodes in the array and the ability to position these arrays in the precise spot one wants to sense. Modern MEA manufacturing techniques have made tremendous advances regarding the density of these microelectrode arrays. Adding the third dimension significantly increases the sampling ability of the arrays. In addition, custom-made MEAs for each specific application allows for more accurate and higher-fidelity readings.

The researchers’ CMU Array is the densest BCI, about one order of magnitude denser than Utah Array BCIs.

Higher-quality MEAs are in demand. MEAs used for controlling virtual actions on a computer or complex limb movements are running up on limitations of the current technology. More advanced applications require MEAs that are customized to each individual and are much higher fidelity than what is currently available.

“Within a matter of days, we can now produce a precision medicine device tailored to a patient or experimenter’s needs,” says Yttri, co-senior author of the study. In addition, while technologies like visual cortex stimulation and artificial limb control are used successfully by the public, being able to personalize the control system in the brain could pave the way for enormous advances in the field.

Panat predicts that it may take five years to see human testing, and even longer to see commercial use. The team is excited to get this successful process out to other researchers in the field to begin testing a wide variety of applications.

A patent on the CMU Array architecture and manufacturing method is pending. The next step, Panat says, is to work with the National Institutes of Health (NIH) and other business partners to get these findings into other labs as quickly as possible and apply for funding that would commercialize this technology.

The research is funded by the NIH’s Brain Research Through Advancing Innovation Neurotechnologies (BRAIN) Initiative.