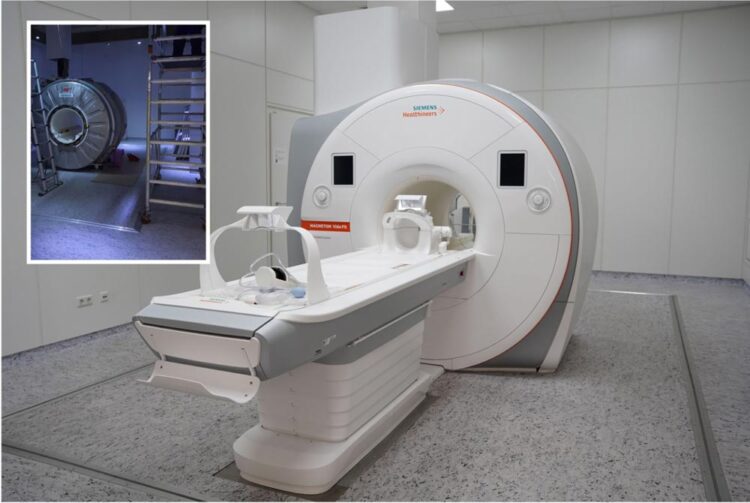 MR tomograph during (insert) and after the upgrade. Most of the device components were replaced except for the superconducting electromagnet.
© Fraunhofer MEVIS

Reliable and feasible early detection of Alzheimer’s disease is the goal of DEBBIE, an international joint project under the EU Joint Programme – Neurodegenerative Disease Research (JPND). It is coordinated by the Fraunhofer Institute for Digital Medicine MEVIS in Bremen, which has received national funding from the Federal Ministry of Education and Research (BMBF) for its work. In this project, MRI images shall uncover the extent to which the blood-brain barrier loses function before the first symptoms of Alzheimer’s disease appear. To speed up development, Fraunhofer MEVIS has now enhanced their own MRI scanner to allow much more effective cooperation with clinical partners.

Magnetic resonance imaging (MRI) is one of the most important procedures in medical diagnostics. It facilitates patient-friendly 3D images of the inside of the body. Using a strong magnetic field and precise radio waves, tissue and organs can be shown in a highly differentiated manner. An MRI scanner can also track essential body processes, such as the flow of blood through the vascular system. For many years, Fraunhofer MEVIS has been improving MRI scans and expanding their capabilities. The experts are continually programming new, improved control software, so-called MRI sequences.

To generate and evaluate these sequences, the institute obtained its own scanner in 2011. The MEVIS team has direct access to the scanner’s operating software and can control individual components of the tomograph with custom software. This has helped enable improved compensation for the movements of certain organs such as the heart and liver and allow blood flow measurement without contrast agents. “But as the device got older, it couldn’t quite keep up with the most current models,” explains Matthias Günther, deputy director of MEVIS. “That’s why we gave it a huge upgrade.”

To this end, the device was outfitted with a new receiving coil, which facilitates detecting sodium signals in addition to the usual hydrogen signals. This is important when examining the so-called sodium-potassium pump, a membrane protein with an essential function in the nervous system. In addition, the scanner now has 64 receiving channels instead of 48. This allows using more powerful coils, in particular a special head coil, and various state-of-the-art acceleration procedures for acquiring images. Certain structures and processes in the brain can now be imaged with much more precision. “We can now employ our latest research results from image acquisition and compare them directly with those from the clinics,” Günther is happy to say.

This is especially significant for the international research project called DEBBIE (Developing BBB-ASL as non-invasive early biomarker of Alzheimer’s disease), directed by Fraunhofer MEVIS together with several clinical partners. The project aims to detect a possible sign of Alzheimer’s disease and to establish the groundwork for early detection in the future. The point of departure: In animal models, it has been recognized that the blood-brain barrier becomes progressively more permeable in the early phase of Alzheimer’s disease. This barrier forms an important protective wall that prevents certain harmful substances from flowing from the bloodstream into the brain cells. If this protective barrier becomes porous, dangerous substances can enter brain cells and disturb or even change the tissue.

It still isn’t clear to what extent this mechanism is present in the human brain and whether this feature is reliable for early detection. To discover this, MEVIS experts are developing new measurement sequences for the MRI scanner. They want to enable the device to map possible changes in the blood-brain barrier with high precision. During this process, contrast agents that are potentially harmful to the patient are not used, as employing them would be sensible for routine screenings in the future. As part of DEBBIE, the clinical project partners are studying both people with Alzheimer’s symptoms and symptom-free control subjects.

The project commenced earlier this year and runs until the end of 2023. The team at MEVIS recently produced a first release of the MRI sequence. “This kind of early detection could, most importantly, help develop drugs or other therapeutics that could prevent Alzheimer’s disease or treat it in early stages,” Günther explains.

To ease collaboration between different partners in joint projects such as DEBBIE, Fraunhofer MEVIS has developed a software platform called gammaSTAR. One problem during collaboration is that project partners often use MRI scanners from different manufacturers or with different software versions of the same brand. If a research institute like MEVIS wants to test a newly developed MRI sequence, it must be modified for different types of devices and software versions, which is a time-consuming, tedious task.

“That’s why we produced gammaSTAR, a manufacturer-independent development platform,” explains Matthias Günther. “We are first implementing a new sequence on it using a device-neutral language.” This abstract language is then translated into code for each device using specialized drivers. For DEBBIE, this means that researchers must only operate one software version instead of three – a substantial simplification. “Upgrading our MRI scanner also helps us here,” says Günther. “Now we can also evaluate the sequences in-house for the most powerful devices and deliver them to our project partners using the gammaSTAR platform.”