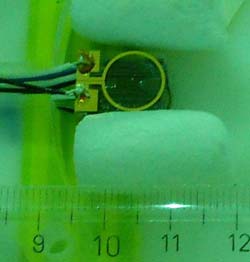 Magnetic sensor the size of a sugar cube with electrical and optical lines.<br>Foto: PTB/NIST<br>

In future a new magnetic sensor the size of a sugar cube might simplify the measurement of brain activity. In the magnetically shielded room of Physikalisch-Technische Bundesanstalt (PTB) the sensor has passed an important technical test: Spontaneous as well as stimulated magnetic fields of the brain were detected.

This demonstrates the potential of the sensor for medical applications, such as, the investigation of brain currents during cognitive processes with the aim of improving neurological diagnostics. The main advantage of the new sensor developed by NIST in the USA over the conventionally used cryoelectronics is its room temperature operation capability making complicated cooling obsolete. The results have recently been published in the journal “Biomedical Optics Express”.

The magnetic field sensor is called Chip-scale Atomic Magnetometer (CSAM) as it uses miniaturized optics for measuring absorption changes in a Rubidium gas cell caused by magnetic fields. The CSAM sensor was developed by NIST (National Institute of Standards and Technology), which is the national metrology institute of the USA. In this cooperation between PTB and NIST each partner contributes his own particular capabilities. PTB’s staff has long standing experience in biomagnetic measurements in a unique magnetically shielded room. NIST contributes the sensors, which are the result of a decade of dedicated research and development.

Up to now the measurement of very weak magnetic fields was the domain of cryoelectronic sensors, the so called superconducting quantum interference device (SQUID). They can be considered as the „gold standard“ for this application, but they have the disadvantage to operate only at very low temperatures close to absolute zero. This makes them expensive and less versatile compared to CSAMs. Even though at present CSAMs are still less sensitive compared to SQUIDs, measurements with a quality comparable to SQUIDs, but at lower costs, might eventually become reality. Due to the cooling requirements, SQUIDs have to be kept apart from the human body by a few centimeters. In contrast to that, CSAMs can be attached closely to the human body. This increases the signal amplitude as the magnetic field from currents inside the human bodydecays rapidly with increasing distance.

An important application is the measurement of the magnetic field distribution around the head, which is called magnetoencephalography (MEG). It enables the characterization of neuronal currents. Such investigations have gained importance during the last few years for neurologists and neuroscientists. Objective indicators of psychiatric disorders as well as age dependent brain diseases, are urgently needed for the support of today’s clinical diagnostics.

Already in 2010 scientists from NIST and PTB had successfully tested the performance of an earlier version of the present CSAM by measurements of the magnetic field of the human heart. For the present study the sensor was positioned about 4 mm away from the head of healthy subjects. At the back of the head, the magnetic fields of alpha waves were detected, a basic brain rhythm which occurs spontaneously during relaxation. In another measurement the brain fields due to the processing of tactile stimuli were identified. These fields are extremely weak and the CSAM result was validated by a simultaneous MEG measurement relying on the established SQUID technology. if/ptb

Images from the inside of blood vessels