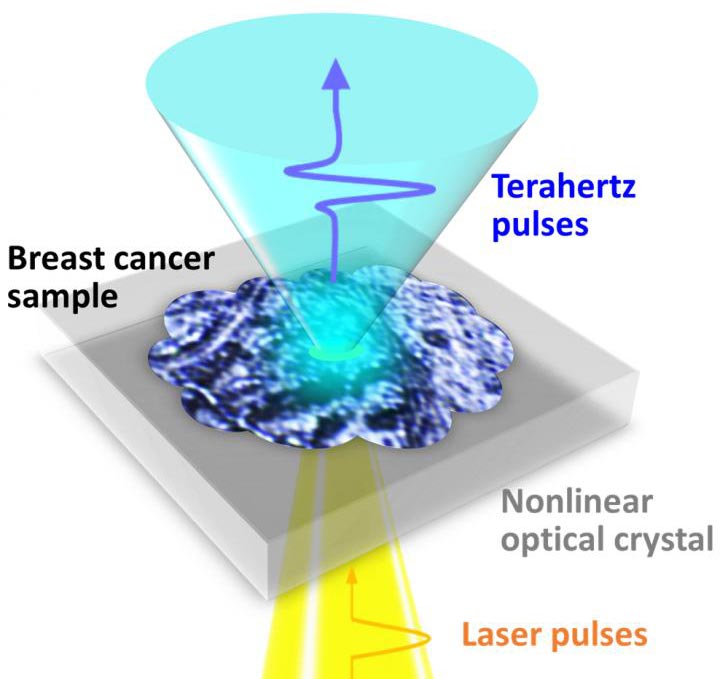 A schematic drawing of the measurement of breast cancer tissue fabricated on a nonlinear optical crystal.
Credit: Osaka University

No stain? No sweat: Terahertz waves can image early-stage breast cancer without staining.

A team of researchers at Osaka University, in collaboration with the University of Bordeaux and the Bergonié Institute in France, has succeeded in terahertz imaging of early-stage breast cancer less than 0.5 mm without staining, which is difficult to identify even by pathological diagnosis. Their work provides a breakthrough towards rapid and precise on-site diagnosis of various types of cancer and accelerates the development of innovative terahertz diagnostic devices.

Breast cancer is roughly divided into two types: invasive and non-invasive. The former, invasive ductal carcinoma (IDC), begins in the cells of a breast duct, growing through the duct walls and into the surrounding breast tissue, potentially spreading to other parts of the body. The latter, ductal carcinoma in situ (DCIS), is an early-stage small breast cancer confined to the breast duct, but it can lead to invasive cancer. Therefore, early detection of DCIS is crucial.

For pathological diagnosis of cancer, the tissue sample is chemically stained, and a pathologist makes a diagnosis using an image of the stained tissue. However, the staining process takes time, and it is difficult to distinguish DCIS from malignant IDC as they look nearly identical.

Terahertz imaging can distinguish cancer tissue from normal tissue without staining and radiation exposure. However, it was still difficult to identify an individual DCIS lesion (which typically range from 50 to 500 μm) by terahertz imaging due to its diffraction-limited spatial resolution of just several millimeters.

“To overcome this drawback, we developed a unique imaging technique in which terahertz light sources that are locally generated at irradiation spots of laser beams in a nonlinear optical crystal directly interact with a breast cancer tissue sample. Consequently, we succeeded in clearly visualizing a DCIS lesion of less than 0.5 mm,” explains lead author Kosuke Okada. The accuracy of this technique is approximately 1000 times higher than that of conventional techniques using terahertz waves.

The researchers also found that terahertz intensity distributions were different between DCIS and IDC, suggesting the possibility of quantitative determination of cancer malignancy.

The breast cancer tissue sample was provided and histologically assessed by collaborators from the University of Bordeaux and the Bergonié Institute. “One of the challenges in this research is preparing a high-quality breast cancer tissue sample fabricated on a nonlinear optical crystal. It is one of the great achievements of international joint research,” says corresponding author Masayoshi Tonouchi.

“Combining our technique with machine learning will aid in the early detection of cancer and determination of cancer malignancy, as well as development of innovative terahertz diagnostic devices using Micro Electro Mechanical Systems.”

Detection of cancer from exhaled breath