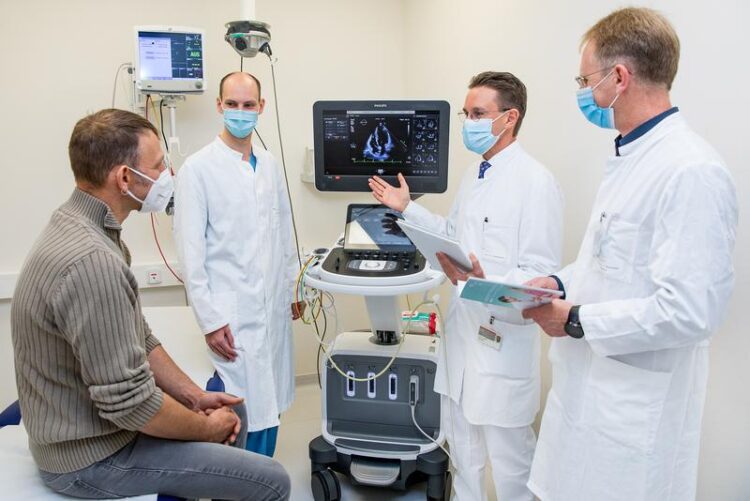 Researchers include the 1000th patient in multicentre study.

Can digitoxin, an active ingredient from foxglove leaves, help patients with heart failure? Many things point to this, but it has not yet been scientifically investigated and proven. Researchers have been investigating this question since 2015 in the large-scale DIGIT-HF study. The study, which involves 50 centres in Germany, Austria and now also Serbia, is coordinated by the Department of Cardiology and Angiology at Hannover Medical School (MHH). The study leaders, Clinic Director Professor Dr. Johann Bauersachs and Senior Physician Professor Dr. Udo Bavendiek, are now pleased about a milestone: with Torsten S. they have now included the thousandth patient in the study. “This is a very high number of study patients, and the associated amount of data is already a great treasure for initial analyses,” explains Professor Bavendiek. With the data, we will probably not only be able to answer our initial question, but also gain many more insights around the therapy of heart failure.” A total of 1,600 patients are to be included in the study.

Up to four million people in Germany affected

Doctors speak of heart failure or cardiac insufficiency when the heart is not able to supply the body with sufficient blood, oxygen and nutrients. In Germany, up to four million people suffer from chronic heart failure. Symptoms include shortness of breath, water retention and even immobility. The disease is one of the most frequent causes of people having to be admitted to hospital or dying as a result. “In the DIGIT-HF study, we are investigating whether digitoxin can prolong the lives of patients with heart failure and reduce the number of hospitalisations due to worsening heart failure,” explains Professor Bauersachs.

So far, there have been no studies on digitoxin, although the active ingredient has been used in the treatment of heart failure for more than 200 years. So far, only one other active ingredient from the digitalis glycoside family has been studied: digoxin. “Compared to this active ingredient, digitoxin has the great advantage that it can also be used in patients with significantly reduced kidney function,” says Professor Bavendiek. Many people with chronic heart failure also suffer from advanced kidney dysfunction or even need dialysis.

The DIGIT-HF study started in 2015. In 2019, the Federal Ministry of Research and Education (BMBF) approved an extension until 2024. For this second funding period, the ministry is providing around 3.8 million euros. The Brauckmann-Wittenberg Heart Foundation is funding the research with a further 700,000 euros. In addition to the Department of Cardiology and Angiology, the Institute of Biometry and the Centre for Clinical Studies of the MHH as well as the study centres of the participating clinics and practices are involved in the research project. By March 2023, a further 600 people with chronic heart failure are to be included in the study. The study is mainly looking for patients with advanced systolic heart failure, i.e. a reduced pumping capacity of the left ventricle.

No great effort for study participants

Torsten S., who has now been included in the study as the 1000th patient, also has this clinical picture. The 41-year-old from near Wolfsburg was diagnosed with heart failure in 2002. “The cause is probably an inflammation,” he reports. He learned about the possibility of participating in the study in the transplantation and artificial heart outpatient clinic at the MHH. For him and the other participants, the study does not involve much effort. They are given a basic check-up for the inclusion and exclusion criteria and then have to come for a check-up every six months and provide information on any special incidents, any hospital stays and their personal state of health. “Most patients feel better cared for due to the regular examinations during the study visits and the constant observation and benefit from the study in this way alone,” reports Professor Bavendiek.

The researchers expect to be able to publish the results of the large DIGIT-HF study at the end of 2024. However, they have already come to some important conclusions. For example, they can refute the fear that digitoxin is “dangerous” for certain groups of patients with heart failure and could lead to death. “There is no scientific evidence for this, and there are also no signals in the study run so far that Digitoxin harms or endangers patients,” Professor Bavendiek clarifies. Based on the study data so far, recommendations for a simple and safe dosage of digitoxin in patients with heart failure have already been developed.

Interested parties can obtain further information from the study centre of the Clinic for Cardiology and Angiology, telephone (0511) 532-5500, e-mail: info@digit-hf.de, internet: http://www.digit-hf.de.