Artificial pancreas proves effective and safe in a hospital setting 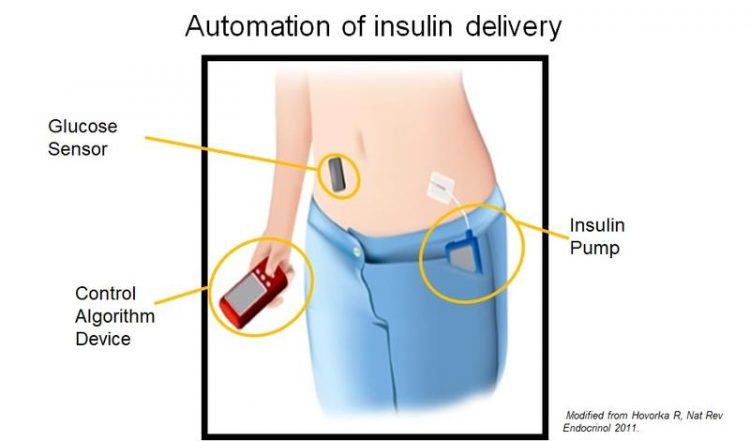 About 20 percent of hospitalized patients suffer from diabetes mellitus. In these patients, the achievement of recommended glycemic targets is a major challenge. Acute illness and changes in nutrition as well as medications and medical interventions lead to rapid alterations in insulin requirements and to fluctuations in blood glucose levels. However, stable blood glucose control is a key prerequisite for optimum recovery and for the avoidance of complications.

A study of the Department of Diabetes, Endocrinology, Clinical Nutrition and Metabolism at Inselspital, Bern, within the framework of the newly established Diabetes Center Berne, and in collaboration with the University of Cambridge UK investigated the extent to which an artificial pancreas can improve diabetes management in hospital. Other departments at Inselspital also assisted with this study.

Professor Christoph Stettler, the Swiss Principal Investigator, and Dr. Lia Bally, the Clinical Investigator, emphasized the potential of the latest diabetes technology for providing hospital care to people with type 2 diabetes: «The artificial pancreas proved effective and safe in our study,» Lia Bally stated, and added: «Compared to conventional therapy, the percentage of patients remaining in the target blood glucose range was nearly 25 percent higher. Levels exceeding the target range were reduced by 26 percent and the blood sugar curve exhibited significantly fewer fluctuations. This was achieved without an increased risk of low blood glucose values due to the prompt response of the system to changes in insulin requirements.»

A total of 136 inpatients with type 2 diabetes were recruited for the study in Bern and Cambridge. Patients were randomly assigned to receive the previous therapy involving manual measurements and insulin injections or a therapy where the blood glucose level was controlled by an artificial pancreas.

The artificial pancreas proved effective, safe, and reliable to use in a hospital setting. The control of blood glucose levels in inpatients improved significantly compared to conventional insulin therapy. People using the artificial pancreas spent an average of 24.2 percent more time with blood glucose levels in the target range (5.6 to 10.0mmol/l), compared to those receiving insulin injections.

They also had lower average blood glucose levels (8.5 vs 10.5mmol/l). This was achieved without increasing their daily insulin dose and without an increased risk of hypoglycaemia. Participant feedback was positive, with 98 percent stating that they were happy to have their glucose levels automatically controlled by the artificial pancreas and all of them saying that they would recommend the new system to others in the hospital.

The trial findings were presented by Lia Bally personally on Monday 25 June 2018 at the American Diabetes Association’s 78th Scientific Sessions in Orlando, Florida, USA, the world’s largest diabetes congress, and published in the New England Journal of Medicine at the same time. Further studies are needed to understand how improved glucose control by means of this artificial pancreas affect patient outcomes.

Contact by e-mail or phone via the Communication Department of Insel Gruppe AG: kommunikation@insel.ch, +41 31 632 79 25.