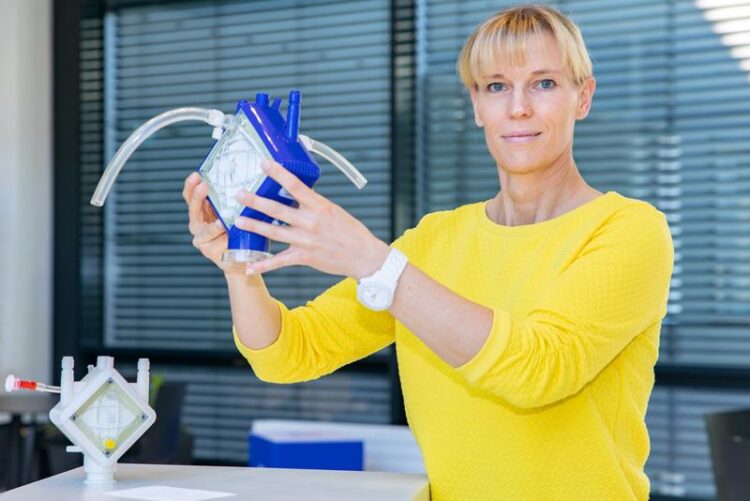 Dr. Bettina Wiegmann with an ECMO device and a special carrier foil on whose surface the tissue cells can settle.
Copyright: Karin Kaiser / MHH

For people with severe lung diseases, transplantation of a healthy organ is often the only chance of survival. But donor lungs are in short supply. A new artificial lung could provide relief. Since 2017, the German Research Foundation (DFG) has been supporting this scientific approach with its Priority Program SPP 2014 “Towards an implantable lung”. The aim is to develop an artificial lung that can be permanently implanted as an alternative to a donor organ. Hannover Medical School (MHH), Europe’s largest lung transplant center, is also involved in the nationwide research network. Now the DFG is funding the work of the Hannover scientists for another three years with more than 1.6 million euros.

ECMO support is not a permanent solution

Research is being conducted at the MHH on a so-called biohybrid lung. It is based on extracorporeal membrane oxygenation (ECMO), in which blood is passed through hollow plastic fibers that act as “artificial alveoli” to ensure gas exchange. This lung support system is already being used clinically – for example, to provide oxygen to patients in intensive care units who are severely ill with COVID-19. “So far, however, we have only been able to bridge lung function with ECMO for a certain period of time, because blood forms clots when it comes into contact with the artificial surfaces and clogs the tubes,” explains Dr. Bettina Wiegmann, who heads three of the four MHH projects at the Lower Saxony Center for Biomedical Engineering, Implant Research and Development (NIFE). The scientist hopes to prevent this thrombus formation by populating the surfaces of the gas exchange membranes, the blood pump and the tubes with special, vessel-lining endothelial cells. “These endothelial cells, which are not endogenous to the body, are also genetically modified so that they are virtually invisible to the patient’s immune system and are therefore not recognized as foreign and fought against,” explains the cardiac surgeon and emergency medicine specialist.

The next step is to test whether the endothelial cells adhere firmly enough to the artificial surfaces and can withstand the frictional stress caused by the blood flow. The membranes must also be further developed in such a way that, while providing the largest possible surface area for gas exchange, the volume of the artificial organ nevertheless remains as small and effective as possible, as is the case with the human lung. In the human lung, about 100 to 140 square meters of breathing surface are packed into 300 million alveoli to save space. Another requirement is the shape of the ECMO device, which must be modified during the development of the biohybrid lung so that it can be optimally implanted in the body. “We cannot insert a square box into a patient’s chest,” the scientist explains.

But the scientist is not only focusing on breathing, but also on kidney function. Because patients who have severe lung disease and require an ECMO device usually also have an increased risk of acute kidney failure, they also require machine dialysis in addition to lung replacement therapy. Until now, these two procedures have been done with separate machines, which increases the risk of infection and thrombosis, among other things. The scientist is working to combine lung and kidney support in a single device. “This so-called lung-kidney crosstalk is another aspect for the development of an individualized implantable lung,” Dr. Wiegmann emphasizes.

Once all remaining problems have been solved, various prototypes of the biohybrid lung will first be studied under laboratory conditions using artificially generated blood circuits. In a next step, they will then be tested first as a respiratory acute aid and later as a permanent lung alternative in animal models. However, the researcher believes that it will be several years before the artificial lungs can be transplanted into the human body.
The DFG Priority Program SPP 2014 is funding a total of ten projects throughout Germany. The lead institutions are the Rheinisch-Westfälische Technische Hochschule (RWTH) and the University Hospital Aachen. The MHH is involved with four projects. Three projects are headed by Dr. Bettina Wiegmann – one of them in cooperation with Professor Dr. Constanca Ferreira de Figueiredo from the Institute of Transfusion Medicine and Transplant Engineering. A fourth is based at the Leibniz Research Laboratories for Biotechnology and Artificial Organs (LEBAO) under the direction of Dr. Ruth Olmer.