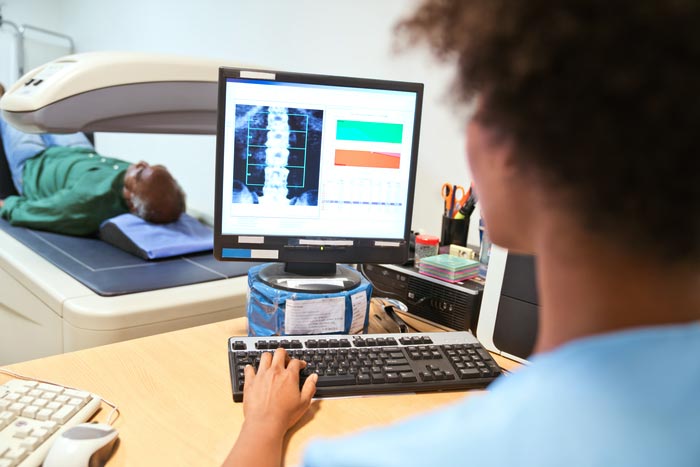 A long-term study has shown a common bone density scan can also show calcified plaque build-up in the abdominal aorta – revealing if someone is at increased risk of developing dementia.

Late-life dementia is becoming increasingly common in people after 80 years of age.

A new long-term study has shown a simple and common scan can reveal if people are at increased risk of developing the condition late in life.

Late-life dementia develops when brain cells are damaged from several diseases, some of which cause narrowing of the blood vessels to the brain.

This link is calcification of the plaques which can build up within the abdominal aorta, which is the largest artery in the body and supplies oxygenated blood from the heart to the abdominal organs and lower limbs.

This calcium build up – known as ‘abdominal aortic calcification’, or AAC – can be very useful to predict cardiovascular disease risk such as heart attack and stroke.

But researchers have now found it is also a reliable marker for late-life dementia.

They examined the AAC results in 968 women from the late 1990s, and then followed their health status for over 15 years.

They found one in two older women had medium to high levels of AAC, and these women were twice as likely to be hospitalized or die from a late-life dementia – independent of other cardiovascular factors or genetic factors.

“This study reaffirms this link and further adds to our understanding of late-onset dementia risk and potential preventative strategies.

“What’s come to light is the importance of modifying risk factors such as diet and physical activity in preventing dementia: you need to intervene early and hopefully this study allows for the earliest possible change and the greatest impact.

“AAC is important as it was able to identify dementia risk in people who don’t have the major genetic risk factor present in 50 per cent of people who develop Alzheimer’s disease, which is the most common form of dementia.”

These machines are common, with some 600,000 bone density tests performed each year in Australia to screen for osteoporosis.

“It’s generally very quick and easy to capture these scans and they are less-invasive, cheaper and miniscule in radiation exposure compared to X-rays or CT scans,” Professor Lewis said.

“We know the causes of AAC go beyond traditional cardiovascular risk factors and many of these causes overlap with late-life dementia risk factors.

“At ECU we’re also working with the computer science team automating the AAC assessments, which will make the process a lot quicker and easier rather than needing a trained imaging expert to read the scans.

“It means these scans may be a cheap, rapid and safe way to screen a large number of susceptible older Australians for higher late-life dementia risk.”

“I think the next step is telling people about their AAC and late-life dementia risk to see if this can motivate healthy diet and lifestyle behaviour changes.”

“It is often associated with heart disease or risk factors such as hypertension earlier in life.