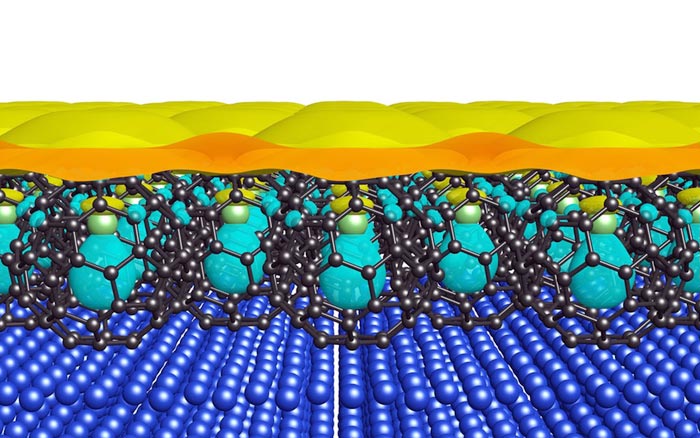 Researchers from the University of Tsukuba successfully deposited a high-purity Li@C60 monolayer film on a copper surface using [Li@C60] NTf2− salt. The film was then studied using scanning tunneling microscopy and density functional theory calculations. The pz superatom molecular orbital was found to be delocalized and stable, providing a robust model. The findings are expected to contribute to the development of organic electronics and provide a useful system for further fundamental research.
Credit: University of Tsukuba

Researchers from the University of Tsukuba successfully grow a Li@C60 film on a copper surface to study the molecular orbitals.

As well as making it one of the most widely recognized molecules, the distinctive soccer ball shape of C60 gives it some useful properties. One of which is thought to be electrical conductivity when multiple molecules are close together. Efforts have therefore been made to optimize C60 so that it can be applied to electronic devices. Now, researchers at the University of Tsukuba have devised a way of depositing films based on C60 to provide a robust model to study. Their findings are published in The Journal of Physical Chemistry Letters.

Organic electronics—based on carbon atoms—offer advantages such as being cheaper, lighter, and more flexible than traditional metal alternatives. They are therefore expected to play a big part in the future of electronics.

C60 is a promising organic electronic material that has been further optimized by including a lithium ion inside the cage to give Li@C60. If a layer of lithium filled cages can be arranged close together on a surface, the molecular orbitals of these structures—known as superatom molecular orbitals (SAMOs)—are thought to be sufficiently diffuse and overlapping to allow them to transport electrons.

Attempts have been made to prepare Li@C60 films to study by depositing them from salts. However, the heat required caused the lithium ions to be dislodged, leaving many of the C60 cages empty. The researchers used a salt with a larger, less strongly bound anion, which meant lower temperatures could be used and a monolayer of intact Li@C60 could be formed.

“Although our previous efforts to deposit Li@C60 films gave us the opportunity to study single superatoms, we didn’t get the complete picture we were looking for,” explains study corresponding author Professor Yoichi Yamada. “Using the [Li@C60] NTf2− salt produced a stable monolayer and provided us with an excellent opportunity to study the SAMOs.”

The researchers used scanning tunneling microscopy and density functional theory calculations to study the Li@C60 film. They found that although the s-SAMO was localized on the individual Li@C60 molecules, the pz-SAMO was much more diffuse, allowing the transport of electrons.

“We have demonstrated a successful model that will be useful for future Li@C60 monolayer experiments,” says Professor Yamada. “And although we are not quite at the stage of making electronic devices based on Li@C60 a reality, our findings provide a significant step in the right direction.”

The article, “Direct Visualization of Nearly-Free-Electron States Formed by Superatom Molecular Orbitals in Li@C60 Monolayer”, was published in The Journal of Physical Chemistry Letters at DOI: 10.1021/acs.jpclett.1c02246.