Home / Materials Sciences / Ultrasound at the nanometre scale reveals the nature of force
17.09.2021 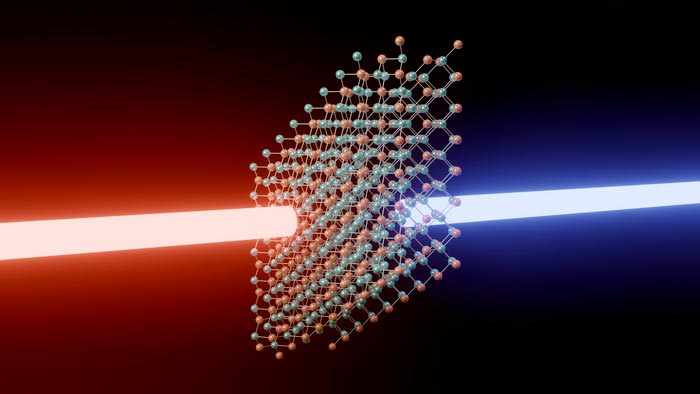 The figure describes the picosecond ultrasonics technique to probe atomic bonds and vdW forces in In2Se3. In the experiment, blue-coloured pump laser pulses are shined on a flake of 2D material, and red-coloured probe laser pules are used to probe the strength of atomic bonds.
Credit: Wenjing Yan, University of Nottingham

Researchers have developed a new method to measure force and atomic bonds at the nanoscale that reveals that the speed of sound depends on the structure it is travelling through.

Scientists from the University of Nottingham and Loughborough University used a measurement method called picosecond ultrasonics, similar to medical ultrasound, to measure the strength of atom bonding within material. Their research has been published in Advanced Functional Materials.

Force is fundamental to everything in daily life. From as large-scale as gravitational force that underlines the operation of the whole universe, to as small-scale as electron-electron interaction that can be hair raising. Force is very difficult to measure especially when the forces are too big or too small, this is especially the case when we enter the nanoworld, for example in the so-called two-dimensional van der Waals (2D-vdW) materials where objects have length scales in the range of 10-9 metres.

These materials are called 2D materials because their geometrical, physical and chemical properties are confined in two dimensions within a thin sheet of material. Within the sheet, atoms are tightly bonded to each other through strong covalent or ionic bonds, whereas the layers themselves are held together by weak van der Waals force. The utterly different nature and coexistence of these vastly different strength forces allow scientists to “peel” the material from bulky mined crystals to perfect single atomic layers and discover amazing phenomena including room temperature superconductivity. Drawing on a piece of paper using pencils for example, is in fact a scientific experiment to make single atomic layers of carbon atoms (graphene), something we all have been doing for centuries without realising. Despite intensive investigation of vdW materials by many research groups around the world, there are barely any experimental techniques to measure the strength of atomic bonds and vdW forces without destroying the materials.

Wenjing Yan was one of the lead researchers from the School of Physics and Astronomy at University of Nottingham, she explains: “We used picosecond ultrasonics to measure both the strong covalent bonds and weak vdW forces without damaging the material. The technique is similar to medical ultrasound but with a much higher frequency (terahertz) and thus non-invasive. The study shines 120 femtosecond (0.00000000000012 second) “pump” laser pulses on flakes of 2D materials, generating phonons which are quantised sound waves. As phonons travel through the material, they feel and interact with the atoms and the bonds within the material. The properties of these phonons, which reflect the strength of the atomic bonds, is then measured by a second “probe” laser pulse. We found that sound travels at very different speeds in different phases (structures) of the same substance.”

Alexander Balanov and Mark Greenaway from Loughborough University expand: “Whilst travelling through the vdW material, the ultrasonic acoustic wave does not destroy the crystal, only slightly deforms it, which means the structure can be thought of as a system of “springs”. By knowing the speed of sound from measurements and how these springs respond to the deformation, we can extract the relative strength of the covalent forces between the atoms and the vdW forces between the layers. If we apply so-called density function theory with the help of high performance computers we can numerically estimate these forces for different stacking configurations and suggest how to tune the elastic, electric and even chemical properties of different polymorphs of vdW materials”

Wenjing continues: “A good analogy for our findings can be made by thinking about pancake and Yorkshire pudding!  Both foods are made from the same mixture: egg, flour and milk, but their different cooking processes give them different structures and properties. Although this is obvious in the macroscopic world, finding such differences in nanostructured materials due to subtle differences in vdW forces is surprising and exciting. This opens possibilities to tune vdW forces by stacking materials in different ways and at the same time non-destructively monitor the properties of these forces and their correlation with the physical and chemical properties of the  multilayer structure. By doing this, we will be able to design the material for purpose just like building Lego blocks as proposed by the Nobel Prize laureates Andre Geim and Konstantin Novoselov.”