The Slipperiness of Ice Explained 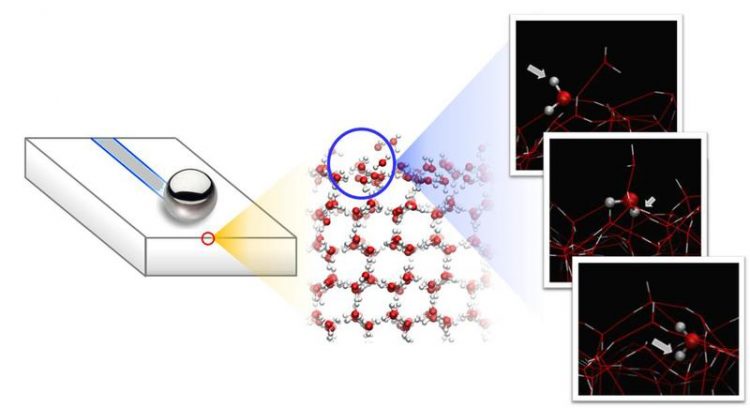 In the experiments, a steel ball slides over the ice surface which consists of rapidly tumbling mobile water molecules that are only loosely bounded to the underlying ice. © Nagata/MPI-P

Winter sports such as skiing, speed skating, figure skating, and curling require the slippery surfaces of ice and snow. While the fact that the ice surface is slippery is widely acknowledged, it is far from being completely understood.

In 1886 John Joly, an Irish physicist, offered the first scientific explanation for low friction on ice; when an object – i.e. an ice skate – touches the ice surface the local contact pressure is so high that the ice melts thereby creating a liquid water layer that lubricates the sliding.

The current consensus is that although liquid water at the ice surface does reduce sliding friction on ice, this liquid water is not melted by pressure but by frictional heat produced during sliding.

A team of researchers led by brothers Prof. Daniel Bonn from the University of Amsterdam and Prof. Mischa Bonn from MPI-P, have now demonstrated that friction on ice is more complex than so far assumed.

Through macroscopic friction experiments at temperatures ranging from 0 °C to -100 °C the researchers show that – surprisingly – the ice surface transforms from an extremely slippery surface at typical winter sports temperatures, to a surface with high friction at -100 °C.

To investigate the origin of this temperature-dependent slipperiness, the researchers performed spectroscopic measurements of the state of water molecules at the surface, and compared these with molecular dynamics (MD) simulations.

The researchers therefore conclude that – rather than a thin layer of liquid water on the ice – the high mobility of the surface water molecules is responsible for the slipperiness of ice.

Although the surface mobility continues to increase all the way up to 0 °C, this is not the ideal temperature for sliding on ice. The experiments show that the friction is in fact minimal at -7 °C; the exact same temperature is imposed at speed skating rinks.

The researchers show that at temperatures between -7 °C and 0 °C, sliding is more difficult because the ice becomes softer, causing the sliding object to dig deeper into the ice.

The results are published in the Journal of Physical Chemistry Letters.