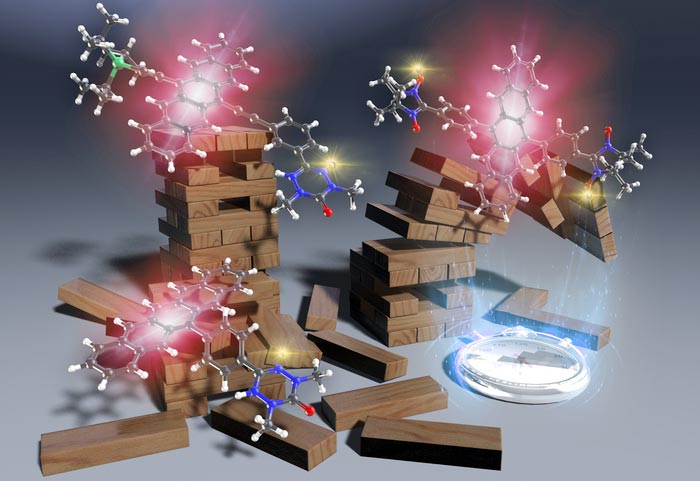 Light instability is a major factor preventing organic semiconductors from being implemented. Researchers from Osaka Metropolitan University demonstrated the ultrafast intersystem crossing of the pentacene moiety in pentacene radical links made the organic semiconductor much more photostable. This is the fastest enhanced intersystem crossing ( 10-13 seconds) demonstrated in a purely organic material without heavy atoms.
Credit: Yoshio Teki

… that has 100 times more light durability than conventional products.

A research group led by Professor Yoshio Teki of the Graduate School of Engineering, Osaka Metropolitan University, has achieved photostability more than 100 times higher than that of TIPS-pentacene, a famous commercially-available pentacene derivative, by increasing the planarity of the molecule and strengthening the conjugation of π electrons between a radical substituent and pentacene moiety. At the same time, to elucidate the mechanism of the remarkable photostability, ultrafast transient absorption measurements using a femtosecond pulsed laser were performed to clarify the peculiar excited-state dynamics of this system.

Focusing on the pentacene moiety of the system, they found that intersystem crossing occurs at an ultrafast rate (10-13 seconds), which has never been achieved before in purely organic materials containing no heavy atoms. Furthermore, the subsequent ultrafast deactivation to the ground state was observed to occur within a time of about 10-10 seconds.

“Excellent photostability was achieved by adding a radical substituent that enhances the planarity of the molecules and strengthens the conjugation of π electrons,” stated Professor Teki. “In the future, we would like to verify the performance of field-effect transistors and apply them as organic semiconductors.”

This article was featured on the back cover of Physical Chemistry Chemical Physics.
About OMU