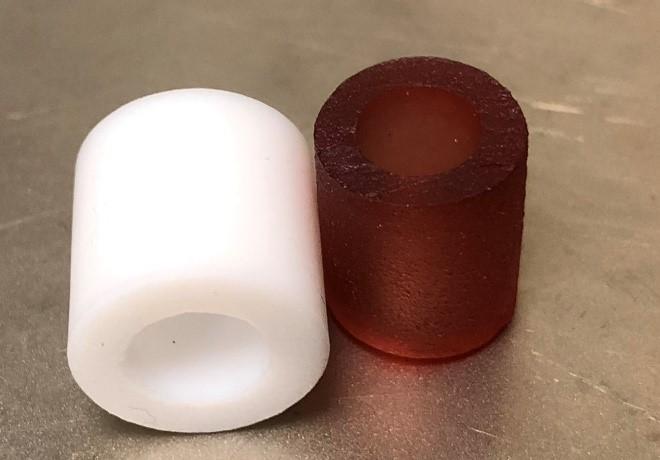 Researchers from the University of Illinois at Urbana-Champaign, Missouri University of Science and Technology, and NASA conducted experiments to understand the behavior of a high-performance electric propellant compared with a traditional propellant.

“Electric solid propellants have been studied as chemical rocket propellants, but what we focused on is studying these types of propellants for electric propulsion systems–so, not the fire, smoke, and combustion you see in chemical rocket engines but for in-space electric pulsed plasma thrusters,” said Joshua Rovey, associate professor in the Department of Aerospace Engineering in The Grainger College of Engineering at the U of I.

Rovey explained that in electric engines, there is a high-temperature plasma right next to the surface of the electric solid propellant. A small amount of that surface vaporizes and gets expelled out at high speeds. That's called ablation.

“Learning about the amount of ablation can allow us to better assess how it might perform as a propellant in an electric rocket engine, and better assess its lifetime,” Rovey said.

Rovey said the application for dual-mode or multimode rocket engines is that there could be one rocket engine with one propellant that can operate in the chemical mode with high thrust, or you can operate it in an electric mode, in which a very fast electric pulse ablates the surface off of the material, and provides very high performance.

In the experiment, a high-performance electric propellant, manufactured by Digital Solid State Propulsion was compared with polytetrafluoroethylene, a traditional propellant used in ablative pulsed plasma thrusters. The space and high-altitude vacuum facility in the Aerospace Plasma Lab was used to conduct the tests. The propellant samples were measured before and after testing to determine how much of the propellant comes off of the surface with each electric pulse.

The results indicate that the electric solid propellant ablates about two times more than the traditional propellant and that the physics of the high-temperature ablation-fed arc discharge is similar for both propellants.

Rovey said, in addition to rocket engines, electric solid propellants can be used as a safer explosive in mines and pyrotechnics because it only ignites with an electrical signal.