Splicing together a thin film in motion 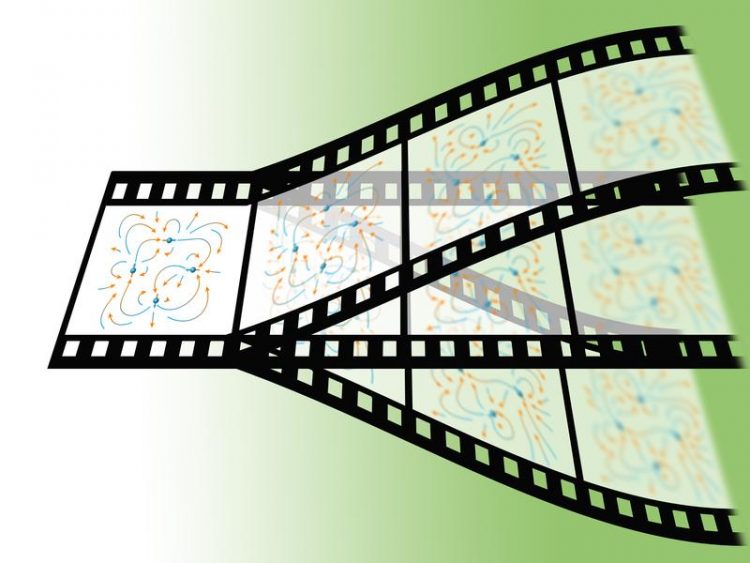 The principle of time-spliced imaging is depicted here for a simulated evolution of magnetic field lines from four rotating magnetic dipoles that have the same initial anti-ferromagnetic structure as the studied material, neodymium nickelate. The early frames in the time series pin down the set of possible reconstructions at later times, sharpening the image recovery by ruling out erroneous solutions. Credit: Jörg Harms / MPSD

The recent work of Dr. Kenneth Beyerlein, a researcher at the Max Planck Institute for Structure and Dynamics (MPSD) in Hamburg, provides a new approach to imaging thin films on the atomic scale. It is made possible using an algorithm for image recovery that splices together a sequence of frames in time. The algorithm is showcased in a publication of the Proceedings of the National Academy of Sciences (PNAS) by recovering the response of a Neodymium Nickelate thin film to a disturbance initiated at its interface.

This insight supported previous experimental findings that the magnetization dynamics propagate through the film faster than the speed of sound. Such fast control of the magnetization is important for the development of new computing devices that use light to control the electronic state of a material.

Fine features can be studied under a microscope because lenses magnify an object’s image. However, the maximum resolution of this process is limited by the wavelength of light used. As visible light is between 400 nm (blue) and 700 nm (red), objects smaller than this will appear blurry under a microscope – making atoms undiscernible. Visualizing atoms with light requires the use of X-rays, as their wavelength matches the size of an atom.

However, efficient lenses for X-rays are difficult to make, with the best resolution so far achieved being just less than 10 nm. Nonetheless, if the X-rays are coherent, like light from a laser, a high-resolution image of the object can be recovered computationally, using a methodology called iterative phase retrieval. This method does not rely on the object being repeated in a lattice, which the basis of X-ray crystallography.

Iterative phase retrieval has been widely applied to study two-dimensional and three-dimensional problems like nanoparticle growth, magnetism domain dynamics and the structure of viruses. However, its application to one-dimensional imaging is fraught with the problem that in some cases multiple different images of an object are found. This ambiguity in one dimension arises from a decreased amount of information that can be used to constrain the solution as compared to higher dimensions.

To overcome this, Beyerlein compared the solutions obtained from different time steps in a set of time-resolved X-ray diffraction rocking curve measurements. The spliced-together 1D profiles showed a high degree of similarity between each time step, confirming the fidelity of the recovered images. On a fundamental level, this offers a new way to constrain 1D phase retrieval, extending the method and allowing it to be applied to a new class of scientific problems.

Using this approach Beyerlein was able to recover the heterogeneous evolution of the magnetization in a thin film in response to the excitation of a phonon in the substrate. The anti-ferromagnetic order in the film was found to be instantly destroyed at the interface, and a demagnetization front propagated into the film at roughly twice the speed of sound. This process happened in just 10 picoseconds and was captured with 5 nm resolution using femtosecond mid-infrared and X-ray laser pulses at the LINAC Coherent Light Source.

This study is part of a larger effort in the group of Professor Andrea Cavalleri using light to track the non-equilibrium correlated states of condensed matter caused by driving lattice dynamics.

*) Full picture caption: “The principle of time-spliced imaging is depicted here for a simulated evolution of magnetic field lines from four rotating magnetic dipoles that have the same initial anti-ferromagnetic structure as the studied material, neodymium nickelate. The early frames in the time series pin down the set of possible reconstructions at later times, sharpening the image recovery by ruling out erroneous solutions.”