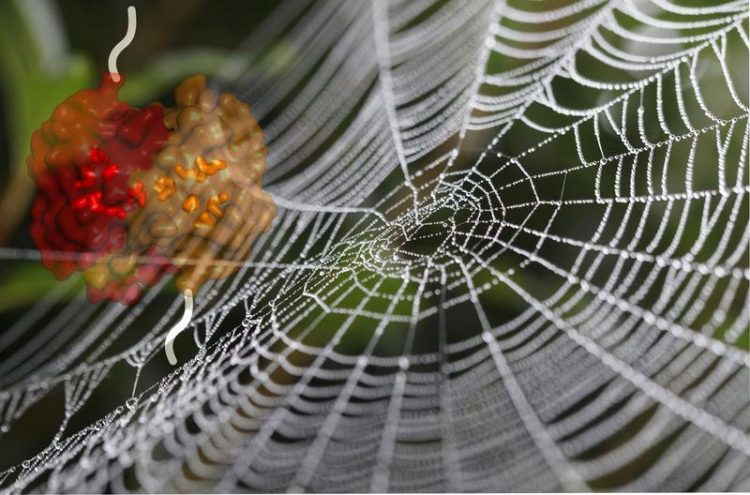 A spider’s web together with the molecular structure of the investigated domain. The side chains of the amino acid methionine are highlighted as coloured sticks. Pixaby.com / Collage: Hannes Neuweiler

Why are the lightweight silk threads of web spiders tougher than most other materials? Scientists from the Universities of Würzburg and Mainz teamed up to find answers to this question. They were able to show that the natural amino acid methionine provides plasticity to a protein domain, which is a constitutive part of spider silk.

This plasticity increases the strength of bonding between the individual domains substantially. The scientists have published their findings in the current issue of Nature Communications.

Marvellous material with many applications

The study is led by Dr. Hannes Neuweiler, a lecturer and group leader at the Department of Biotechnology and Biophysics at the University of Würzburg. He has been studying spider silk proteins for many years – or more precisely their molecular properties.

“Spider silk is one of the toughest materials found in nature. It is stronger by weight than high-tech fibres such as Kevlar or carbon,” Neuweiler says. The unique combination of toughness and elasticity makes it highly attractive for industry. Whether in aviation, textile industry or medicine, potential applications of this outstanding material are numerous.

Although synthetic spider silk is already being produced on an industrial scale and used in various products, it is not yet capable of mimicking the excellent mechanical properties of the natural blueprint. The latest findings of the researchers in Würzburg might contribute to eliminating the shortcomings.

“We have discovered that web spiders make use of a particular amino acid, called methionine, to tightly connect silk proteins in a previously unknown manner,” Neuweiler outlines the central result of the study.

On the background: All life is based on proteins. Nature draws on a limited set of 20 different amino acids to build up all proteins, which critically participate in nearly every task of a living organism. After being synthesised as linear chains of amino acids, most proteins fold into highly ordered, three-dimensional structures.

Natural amino acids can be roughly divided into two groups based on the properties of their side chains. So-called hydrophobic side chains have a low solubility in water. They are often located in the core of a protein and stabilize the folded state. Hydrophilic, or water-soluble, side chains tend to be on the surface of the protein where they are responsible for an almost unlimited variety of functions.

Methionine belongs to the group of hydrophobic amino acids. But it is rare in most proteins. “To date, molecular biologists and protein scientists have paid little attention to this amino acid. In proteins the side chain of methionine is believed to have little functional importance,” Neuweiler says.

This view may change now. The side chain of methionine is known to be exceptionally flexible compared to the side chains of the other 19 natural amino acids. Neuweiler and his team were now able to show that spiders harness this property by placing large numbers of methionine in the core of the amino terminal domains of their silk proteins. Here the amino acid transfers it’s flexibility to the entire structure of the domain, which makes it ductile.

Proteins are traditionally viewed as rigid bodies. More recent research, however, highlights the importance of protein dynamics for their function. “Like a mouldable key that adapts its shape to the lock, the domains of the silk proteins change their shape to tightly connect with each other,” Neuweiler describes the process. This effect enhances the bonding strength between the terminal domains substantially. Methionine in the hydrophobic core of a protein malleablises the structure, which can dramatically improve function.

From basic research to applied science

Dr. Hannes Neuweiler and his colleagues are performing basic research in their laboratories. “Our work aims at making fundamental contributions to understanding the relationship between structure, dynamics and function of proteins,” the scientist says. At the same time, he expects these new findings to have implications in the field of design and development of new proteins as well as in material science.

He believes that it is conceivable to incorporate methionine in the core of proteins, as web spiders do, in order to improve their functions or to even create new functions. In Neuweiler’s opinion, material science will likely benefit from the discovery that methionine in silk proteins drives tight interactions in spider silk. By artificially modifying the methionine content of silk protein domains, it may be possible to control the mechanical properties of the synthetic material.

Neuweiler and his team are planning to conduct comparative studies on the effect of methionine in silk proteins of other spider species and silk glands. Moreover, they want to incorporate methionine in proteins from other organisms to modify and possibly improve their functions.