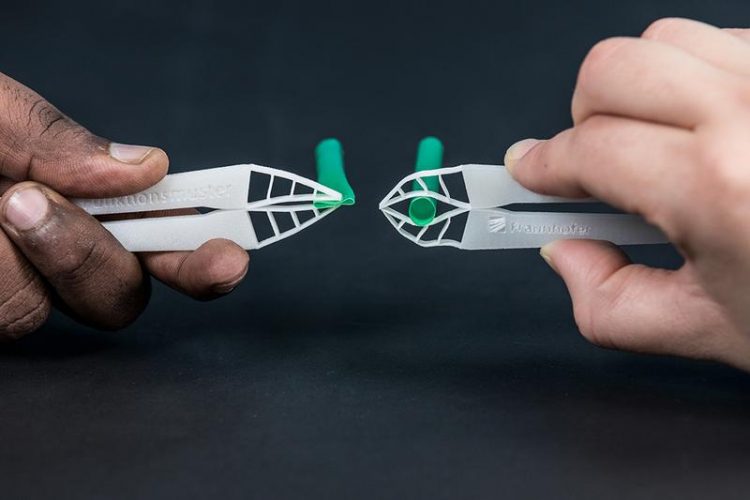 Dr. Oliver Schwarz at Fraunhofer IPA explains: »Traditional forceps always exert the greatest pressure at the tip. For biologists and medical professionals this is a common problem: When handling delicate tissue, the cell bond can be damaged by the high pressure.« Together with his team, the biotechnologist has developed »shape-adaptive forceps« to reduce pressure.

Fish, or more specifically their tail fins, were the inspiration for the new tool. They have radial structures linked by transverse elastic connective tissue. This structure means that the so-called rays (the bony spines) of the fin bend in the opposite direction to the water pressure and improve the fish’s propulsion.

This fin-ray effect, discovered in 1997, was used by Fraunhofer IPA researchers to develop medical equipment. Dr. Schwarz expands on this: »Our bionic forceps consist of longitudinal and transverse struts, like a fish tail, which are connected elastically and structured in such a way that they react to pressure and work against it.«

The pressure cannot be too great for this: The researcher carefully grips a straw that is lying on the table with his forceps. Both tips, which were perfectly straight just before, adapt immediately to the surface of the straw. »This shape-adaptive behavior means that pressure is no longer exerted only at one point, instead it is distributed over the entire area of contact,« the researcher explains as he lifts the straw off the table with the forceps. The straw only bends slightly into an oval, but is not squashed.

The secret lies in the design. After months of fiddly work, Fraunhofer IPA had developed different models on a computer. Dr. Schwarz explains: »Our aim was to design the forceps in such a way that they would sit well in the hand, guarantee the desired adaptation to the surface and also be able to be produced cost-effectively and sustainably.«

The most successful model – made out of polyamide, a synthetic polymer created using castor oil that is suitable for medical applications – can be produced by 3D printing or injection molding. The first prototypes are already being used in practical tests by surgeons.

Medicine is just one of many application areas: the new shape-adaptive forceps can be used anywhere that delicate parts need to be attached or transported, such as biologic research or electronic component manufacturing.