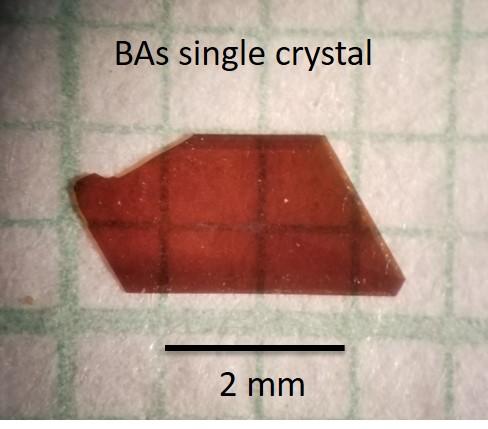 Scientists have reported growing a crystal created from boron and arsenic, with a thermal conductivity more than twice that of copper. Credit: University of Houston

Scientists have long known that diamond is the best material for conducting heat, but it has drawbacks: It is costly and is an electrical insulator; when paired with a semiconductor device, diamond expands at a different rate than the device does when it is heated.

Now a group of researchers from around the United States has reported that a crystal grown from two relatively common mineral elements – boron and arsenic – demonstrates far higher thermal conductivity than any other semiconductors and metals currently in use, including silicon, silicon carbide, copper and silver.

The discovery has the potential to address a range of technological challenges, including cooling electronic devices and nanodevices, said physicist Zhifeng Ren, a researcher with the Texas Center for Superconductivity at the University of Houston and one of the corresponding authors on the paper announcing the discovery, published Thursday, July 5, in the journal Science.

Thermal conductivity is measured in the unit of Wm-1K-1, used to denote the amount of heat that can pass through a material that is one meter long when the temperature difference from one side to the other is 1 degree Kelvin. The boron-arsenide crystal has a conductivity in excess of 1,000 at room temperature, the researchers reported.

But the researchers now have reported growing crystals larger than 4 millimeters by 2 millimeters by 1 millimeter. A larger crystal could be produced by extending the growing time beyond the 14 days used for the experiment, they said.

Working with Tom Reinecke at the Naval Research Lab and Lucas Lindsay at Oak Ridge National Laboratory, David Broido, a theoretical physicist at Boston College and one of the authors of the paper, first proposed that the combination could yield a high thermal conductivity crystal, defying the conventional theory that ultrahigh lattice thermal conductivity could only occur in crystals composed of strongly bonded light elements, limited by anharmonic three-phonon processes.

This work confirms the theory, although it took a while. Several researchers involved in the current publication, along with Bing Lv, then a researcher at UH and now a faculty member at the University of Texas-Dallas, reported synthesizing a small crystal with a conductivity of about 200 in 2015.

Paul Ching-Wu Chu, T.L.L. Temple Chair of Science at UH and founding director of the Texas Center for Superconductivity, said combining boron with arsenic was a complex challenge.

“The mismatch between the physical properties of boron and arsenic makes the synthesis of boron arsenide extremely difficult and boron-arsenide single crystals almost impossible,” he said.

The researchers created the crystal using chemical vapor transport, complicated by the fact that boron has a melting point of 2,076 degrees Centigrade, while arsenic changes directly from a solid to a gas.

Co-author Shuo Chen, assistant professor of physics at UH, said the crystal could be useful in cooling electronic devices.

The potential for a semiconductor with high thermal conductivity is immense, Chen said.

“Using femto-second laser pulses, we were able to measure the thermal conductivities of the boron-arsenide crystals,” added Bai Song, a postdoctoral associate mentored by Professor Gang Chen in MIT's Department of Mechanical Engineering. “Such high thermal conductivity makes boron-arsenide attractive for microelectronic applications both as device materials and as heat sink materials.”

The project was funded by the U.S. Navy's Multidisciplinary University Research Initiative, led by Li Shi, professor of mechanical engineering at the University of Texas at Austin.

Shi noted that team members at UT-Austin and MIT devised four different methods to validate boron arsenide as the first known semiconductor with a thermal conductivity as high as 1000 Wm-1 K-1 at room temperature.

The next step, he said, will be “to explore device technologies with the boron arsenide bulk crystals.”