Researchers discover directional and long-lived nanolight in a 2D material 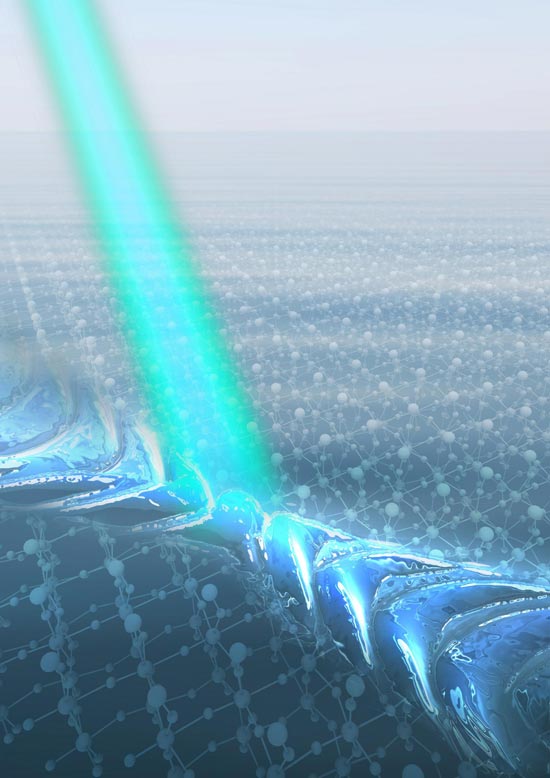 Future information and communication technologies will rely on the manipulation of not only electrons but also of light at the nanometer-scale. Squeezing (confining) light to such a small size has been a major goal in nanophotonics for many years. A successful strategy is the use of polaritons, which are electromagnetic waves resulting from the coupling of light and matter.

Particularly strong light squeezing can be achieved with polaritons at infrared frequencies in 2D materials, such as graphene and hexagonal boron nitride. However, although extraordinary polaritonic properties – such as electrical tuning of graphene polaritons – have been recently achieved with these materials, the polaritons have always been found to propagate along all directions of the material surface, thereby losing energy quite fast, which limits their application potential.

Recently, it was predicted that polaritons can propagate “anisotropically” along the surface of 2D materials, in which the electronic or structural properties are different along different directions. In this case, the velocity and wavelength of the polaritons strongly depend on the direction in which they propagate. This property can lead to highly directional polariton propagation in the form of nanoscale confined rays, which could find future applications in the fields of sensing, heat management or maybe even quantum computing.

“Our findings promise α-MoO3 to become a unique platform for infrared nanophotonics”, says Qiaoliang Bao. “It was amazing to discover polaritons on our α-MoO3 thin flakes travelling only along certain directions”, says Weiliang Ma, postgraduate-student and co-first-author. “Until now, the directional propagation of polaritons has been observed experimentally only in artificially structured materials, where the ultimate polariton confinement is much more difficult to achieve than in natural materials”, adds co-first author Shaojuan Li.

Apart of directional propagation, the study also revealed that the polaritons on α-MoO3 can have an extraordinarily long lifetime. “Light seems to take a nanoscale highway on α-MoO3; it travels along certain directions with almost no obstacles”, says Pablo Alonso-González, co-first author of the paper. He adds: “Our measurements show that polaritons on α-MoO3 live up to 20 picoseconds, which is 40 times larger than the best-possible polariton lifetime in high-quality graphene at room temperature”.

Because the wavelength of the polaritons is much smaller than that of light, the researchers had to use a special microscope, a so-called near-field optical microscope, to image them. “The establishment of this technique coincided perfectly with the emergence of novel van der Waals materials, enabling the imaging of a variety of unique and even unexpected polaritons during the past years”, adds Rainer Hillenbrand.

For a better understanding of the experimental results, the researchers developed a theory that allowed them to extract the relation between the momentum of polaritons in α-MoO3 with their energy. “We have realized that light squeezed in α-MoO3 can become “hyperbolic” making the energy and wave-fronts to propagate in different directions along the surface, which can lead to interesting exotic effects in optics (such as e.g. negative refraction or “superlensing”)”, says Alexey Nikitin, Ikerbasque Research Associate at Donostia International Physics Center (DIPC), who developed the theory in collaboration with Javier Taboada-Gutiérrez, and Javier Martín-Sánchez, PhD and postdoctoral researchers, respectively at Alonso-Gonzalez´s group.

The current work is just the beginning of a series of studies focused on directional control and manipulation of light with the help of ultra-low-loss polaritons at the nanoscale, which could benefit the development of more efficient nanophotonic devices for optical sensing and signal processing or heat management.

ABOUT UNIVERSITY OF OVIEDO:

The University of Oviedo, located in Oviedo, Asturias, has a teaching and research staff of more than 2000 people in 38 departments, among them are 350 young researchers with expertise ranging from physics, chemistry, life sciences, biology etc., at both a post-graduate and post-doctoral level. http://www.uniovi.es

The CIC nanoGUNE Co-operative Research Centre, located in Donostia-San Sebastian, Basque Country, is a research center set up with the mission to perform world-class nanoscience research for the competitive growth of the Basque Country. NanoGUNE is also recognized by the Spanish Research Agency as a “María de Maeztu” Unit of Excellence (2017-2021). http://www.nanogune.eu

ABOUT SOOCHOW UNIVERSITY Soochow University, a Jiangsu provincial key comprehensive university located in Suzhou, Jiangsu, China. The university is part of the national “211 Project” and is a “2011 Plan” university, also one of the top 5% research universities (overall ranking 28 within 704 Chinese universities in 2017) in China. http://www.suda.edu.cn

The Donostia International Physics Center Foundation (DIPC) (created in 1999) promotes and catalyses the development of basic research in Physics. It presents an international point of reference in the field of the Physics of Materials. http://www.dipc.ehu.es