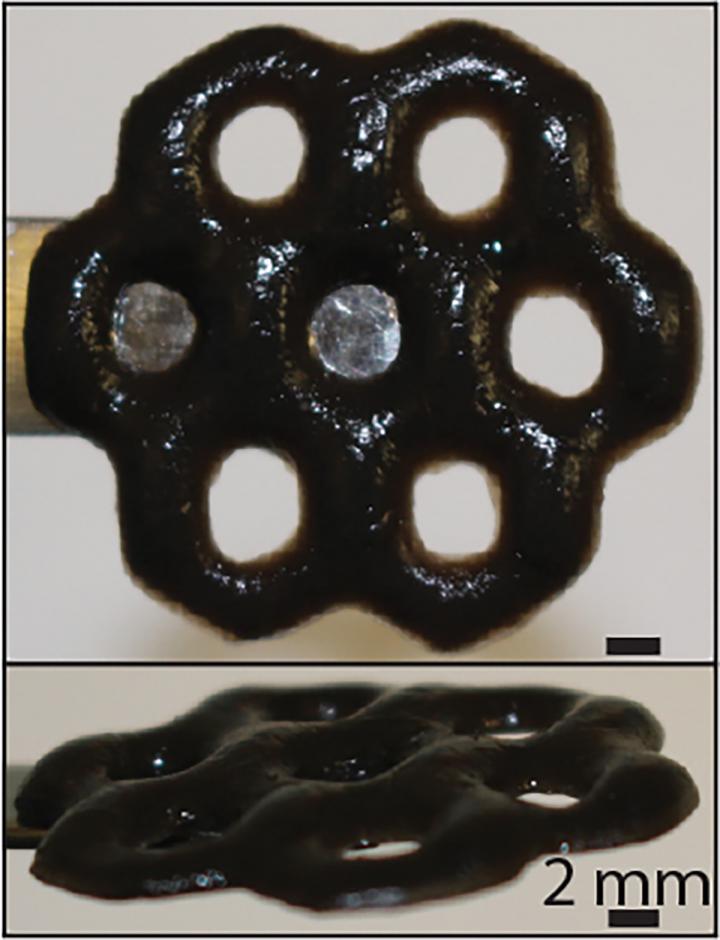 Brown University researchers have created a hybrid material out of seaweed-derived alginate and the nanomaterial graphene oxide. The 3-D printing technique used to make the material enables the creation of intricate structures, including the one above, which mimics that atomic lattice a graphene. Credit: Wong Lab / Brow University

“One limiting factor in the use of alginate hydrogels is that they're very fragile — they tend to fall apart under mechanical load or in low salt solutions,” said Thomas Valentin, a Ph.D. student in Brown's School of Engineering who led the work. “What we showed is by including graphene oxide nanosheets, we can make these structures much more robust.”

The material is also capable of becoming stiffer or softer in response to different chemical treatments, meaning it could be used to make “smart” materials that are able to react to their surroundings in real time, the research shows. In addition, alginate-GO retains alginate's ability to repel oils, giving the new material potential as a sturdy antifouling coating.

The 3-D printing method used to make the materials is known as stereolithography. The technique uses an ultraviolet laser controlled by a computer-aided design system to trace patterns across the surface of a photoactive polymer solution.

The light causes the polymers to link together, forming solid 3-D structures from the solution. The tracing process is repeated until an entire object is built layer-by-layer from the bottom up.

In this case the polymer solution was made using sodium alginate mixed with sheets of graphene oxide, a carbon-based material that forms one-atom-thick nanosheets that are stronger pound-for-pound than steel.

One advantage to the technique is that the sodium alginate polymers link through ionic bonds. The bonds are strong enough to hold the material together, but they can be broken by certain chemical treatments. That gives the material the ability to respond dynamically to external stimuli.

Previously, the Brown researchers showed that this “ionic crosslinking” can be used to create alginate materials that degrade on demand, rapidly dissolving when treated with a chemical that sweeps away ions from the material's internal structure.

For this new study, the researchers wanted to see how graphene oxide might change mechanical properties of alginate structures. They showed that alginate-GO could be made twice as stiff as alginate alone, and far more resistant to failure through cracking.

“The addition of graphene oxide stabilizes the alginate hydrogel with hydrogen bonding,” said Ian Y. Wong, an assistant professor of engineering at Brown and the paper's senior author.

“We think the fracture resistance is due to cracks having to detour around the interspersed graphene sheets rather than being able to break right though homogeneous alginate.”

The extra stiffness enabled the researchers to print structures that had overhanging parts, which would have been impossible using alginate alone. Moreover, the increased stiffness didn't prevent alginate-GO also from responding to external stimuli like alginate alone can.

The researchers showed that by bathing the materials in a chemical that removes its ions, the materials swelled up and became much softer. The materials regained their stiffness when ions were restored through bathing in ionic salts. Experiments showed that the materials' stiffness could be tuned over a factor of 500 by varying their external ionic environment.

That ability to change its stiffness could make alginate-GO useful in a variety of applications, the researchers say, including dynamic cell cultures.

“You could imagine a scenario where you can image living cells in a stiff environment and then immediately change to a softer environment to see how the same cells might respond,” Valentin said. That could be useful in studying how cancer cells or immune cells migrate through different organs throughout the body.

And because alginate-GO retains the powerful oil-repellant properties of pure alginate, the new material could make an excellent coating to keep oil and other grime from building up on surfaces.

“These composite materials could be used as a sensor in the ocean that can keep taking readings during an oil spill, or as an antifouling coating that helps to keep ship hulls clean,” Wong said. The extra stiffness afforded by the graphene would make such materials or coatings far more durable than alginate alone.

The researchers plan to continue experimenting with the new material, looking for ways to streamline its production and continue to optimize its properties.

Additional co-authors of the study include Alexander K. Landauer, Luke C. Morales, Eric M. DuBois, Shashank Shukla, Muchun Liu, and Lauren H. Stephens of Brown University, as well as Christian Franck of the University of Wisconsin, and Po-Yen Chen of the National University of Singapore. The research was supported by the U.S. Department of Education's GAANN Training Grant in Applications and Implications of Nanotechnology, (P200A150037), the National Science Foundation (DGE-1058262) and a Brown University Hibbitt Postdoctoral Fellowship.