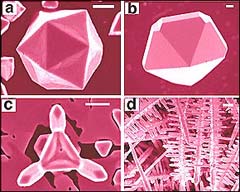 LEAD NANOPARTICLES — Scanning electron microscopy images of lead nanoparticles created with the electrodeposition technique. Shaped nanoparticles such as icosahedrons (a) and decahedrons (b) can be produced with voltages lower than 1.2 volts while elongated structures such as tripods (c) and nanobrushes (d) appear at higher voltages. The bar at the top of each image represents 500 nanometers (billionths of an inch). <br>

Wires, tubes and brushes make it possible to build and maintain the machines and devices we use on a daily basis. Now, with help from a surprising source, these same building blocks can easily be created on a scale 10,000 times smaller than the period at the end of this sentence.

Researchers at Argonne have figured out the basics of using electrochemistry to control the architecture of nanocrystals – small structures with dimensions in billionths of meters. Their findings, published in the March 3 edition of the Journal of the American Chemical Society, provide a practical method of generating large quantities of architecture-controlled nanocrystals, such as superconductors, ferromagnets and noble metals.

“The architectures of the nanocrystals are mainly controlled by applied voltages,” said lead scientist Zhili Xiao of Argonne’s Materials Science Division and Northern Illinois University’s Physics Department. “This gives us much greater control over the growth conditions of the nanocrystals. We were able to create a great variety of structures with greater convenience and predictability compared with more traditional methods.”

Traditional methods of fabricating nanocrystals involve rapidly injecting chemicals into a heated solution at high temperatures. The downside to this approach, however, is the difficulty of controlling the solution concentration, which changes as the reaction proceeds. This change in concentration leads to changes in the electrochemical potential – the measure of a compound’s ability to react in solution. Since a stable electrochemical potential is crucial for forming well-shaped nanocrystals, scientists using this method often found themselves struggling to control solution concentrations and to time the right moment to stop the reaction.

In contrast, Xiao and his colleagues found that they could easily control the electrochemical potential by using electric voltage. The scientists used a technique called electrodeposition, which uses electricity passing through an electrode to reduce ions from solution on a given surface. By changing the applied voltage value and the type of chemicals in the solution, the Argonne researchers were able to synthesize large quantities of nearly 30 different nanostructures, including nanoparticles of various shapes, nanowires, nanobrushes and nanoscale tripods.

“We found, for example, that shaped nanoparticles tend to form at lower voltages while higher voltages tend to produce structures such as nanowires and nanobrushes,” explained Xiao.

With large quantities of these nanocrystals in hand, scientists are exploring their unique physical and chemical properties. These structures can lead to discoveries of new phenomena and applications, such as the use of ferromagnetic nanocrystals as components in ultra high-density storage media and the use of certain metal nanocrystals as catalysts for hydrogen production and sensing.

“When you alter the shape of a nanocrystal, you’re basically setting new boundaries to the space in which its electrons can move,” said Wai-Kwong Kwok, leader of the Superconductivity and Magnetism group in the Materials Science Division. “This, in turn, affects its physical properties, which explains why a triangle and a sphere made of lead can have completely different superconducting properties.”

The research was supported by the U.S. Department of Energy’s Office of Basic Energy Sciences and the University of Chicago-Argonne Consortium for Nanoscience Research.

The nation’s first national laboratory, Argonne National Laboratory conducts basic and applied scientific research across a wide spectrum of disciplines, ranging from high-energy physics to climatology and biotechnology. Since 1990, Argonne has worked with more than 600 companies and numerous federal agencies and other organizations to help advance America’s scientific leadership and prepare the nation for the future. Argonne is operated by the University of Chicago for the U.S. Department of Energy’s Office of Science.