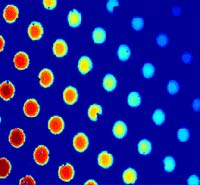 A new collaboration at the National Institute of Standards and Technology (NIST) will contend with lots of sticking points–by design. NIST and industry researchers intend to devise rapid screening and measurement methods that speed discovery of new epoxies, pressure-sensitive adhesives and other products manufactured for the $30 billion global adhesives market.

In a project just getting under way, the partners will refine and extend miniaturized technologies for simultaneous testing of hundreds of systematically varying adhesive formulations. One test platform is designed for screening new combinations of components used to make labels, skin patches and other pressure-sensitive adhesives, a fast-growing segment of the market. It includes an array of up to 1,600 “micro lenses,” an arrangement resembling a fly’s compound eye. In an automated process, each lens is coated with an incrementally different formulation. The array is lowered until each lens contacts a wafer-like substrate coated with a thin film that also can vary in chemical composition and thickness. The array then is raised until each lens detaches from the substrate.

From measurements of changes in the position of lenses and other preselected variables, researchers can deduce the adhesive strength of different formulations under deliberately varying conditions. A microscope mounted below the testing platform monitors the entire process. The resulting color-coded maps show changes in adhesion energy (an indicator of an adhesive’s strength) as lens and substrate bond and, then, separate.

Another system for high-throughput testing of prospective epoxies and other adhesives for the microelectronics and other industries also is under development as part of this new collaborative effort.

Partners in the project include Intel and National Starch and Chemical, an ICI company. Both Intel and ICI are members of the NIST Combinatorial Methods Center (NCMC) consortium. For more information, go to http://polymers.msel.nist.gov/combi/index.html