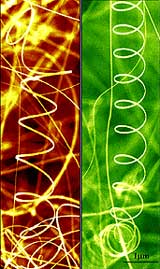 Images show helical structures made from zinc oxide (ZnO). The typical width of the structures is about 30 nanometers.

Researchers at the Georgia Institute of Technology have developed a new class of nanometer-scale structures that spontaneously form helical shapes from long ribbon-like single crystals of zinc oxide (ZnO). Dubbed “nanosprings,” the new structures have piezoelectric and electrostatic polarization properties that could make them useful in small-scale sensing and micro-system applications.

Just 10 to 60 nanometers wide and 5-20 nanometers thick – but up to several millimeters long – the new structures are similar to but smaller than the “nanobelts” first reported by Georgia Tech scientists two years ago in the journal Science. The new helical structures and their potential applications were described in the journal Nano Letters. The research was supported by the National Science Foundation and NASA.

“These structures are very different from our original nanobelts and are a major step toward a new system of nanostructures,” said Zhong L. Wang, director of Georgia Tech’s Center for Nanoscience and Nanotechnology and a professor in the School of Materials Science and Engineering. “Piezoelectric and polar-surface dominated smart materials based on zinc oxide are important because they could be the transducers and actuators for future generations of nanoscale devices.”

The piezoelectric properties of the new structures could make them useful in detecting and measuring very small fluid flows, tiny strain/stress forces, high-frequency acoustical waves and even air flows that would otherwise be imperceptible. When deflected by the flow of air or fluids, the nanosprings would produce small but measurable electrical voltages.

“They could be used to measure pressure in a bio-fluid or in other biomedical sensing applications,” said Wang. “You could use them to measure nano- or pico-newton forces.”

The piezoelectric properties could also make the structures useful as actuators in micro-systems and nanosystems, where applying voltage would induce strains. “In micromechanical systems, these structures could provide the coupling between an electrical signal and a mechanical motion,” Wang noted.

Semiconductor-based nanostructures that rely on electrostatic forces have gained widespread research interest, but Wang said development of nanomaterials for piezoelectric actuators have lagged. The new nanosprings could therefore give designers of future nanoscale systems more options.

Beyond their piezoelectric properties, the new structures also display unusual electrostatic polarization, with positively and negatively charged surfaces across the thickness of the nanoribbon. This electrical charge could be used to attract specific molecules, potentially allowing the nanosprings to be used as biosensors to detect single molecules or cells.

“The polarized surfaces will attract different molecules with different charges, which would permit selectivity,” Wang said. “The nanosprings have the promise of being able to do single-molecule detection because they are so small.”

Ultimately, he hopes the new structures could prove useful in biomedical monitoring applications, their small size allowing development of systems small enough to be implanted in the body. “We would like to use these materials for in-situ, real-time, non-destructive monitoring within the body with high levels of sensitivity,” Wang said.

Beyond their potential applications, the new structures could give scientists a way to study the piezoelectric effect and polarization-induced ferroelectricity at the nanoscale. The helical structure could also provide a new way to study nanometer-scale electromechanical coupling.

Wang and collaborator Xiang Yang Kong fabricate the structures using a solid-vapor process, evaporating high-purity zinc oxide powder in a horizontal tube furnace at temperatures of approximately 1,350 degrees Celsius under vacuum. After an argon gas flow is introduced into the furnace, the structures form on a cooler alumina substrate. Most of the structures formed are nanobelts up to several hundred microns long, but the researchers also observe nanobelts in ring shapes, and helical structures consisting of coiled nanobelts. These nanosprings have diameters ranging from 500 to 800 nanometers.

Many challenges remain before the nanosprings can find application, however.

“We can cut this material into specific lengths and manipulate it, but that’s only the first step,” Wang noted. “We need to know how to integrate this into existing technology. We can generate voltages, but how can we measure them? We must learn to calibrate a system, and quantify the data to know what force is being applied.”

In March 2001, Wang’s research team announced in the journal Science that they had created a new type of nanometer-scale structure that could be the basis for inexpensive ultra-small sensors, flat-panel display components and other electronic nanodevices. Dubbed “nanobelts,” the structures were made of semiconducting metal oxides such as zinc oxide.

Wang predicted at that time that the extremely thin and flat structures would offer significant advantages over the nanowires and carbon nanotubes that had been extensively studied at that time. He reported that the ribbon-like nanobelts were chemically pure, structurally uniform and largely defect-free, with clean surfaces not requiring protection against oxidation. Each was made up of a single crystal with specific surface planes and shape.

Sponsorship from the National Science Foundation came through contract ECS-0210332. Additional support came through the NASA Vehicle Systems Program and the Department of Defense Research and Engineering (DDR&E) program.

Do simulations represent the real world at the atomic scale?