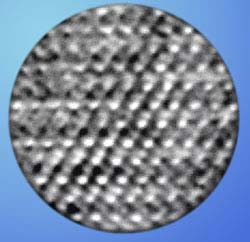 The first experimental image of lithium atoms from a transmission electron microscope: the image shows the arrangement of lithium ions among cobalt and oxygen atoms in the compound lithium cobalt oxide.

One Angstrom Microscope’s observations of the smallest, lightest metal atoms are a first for electron microscopy

For the first time researchers have used a transmission electron microscope — the One Angstrom Microscope (OÅM) at the Department of Energy’s National Center for Electron Microscopy (NCEM) at Lawrence Berkeley National Laboratory — to image lithium atoms. Only atoms of hydrogen and helium are smaller and lighter than those of lithium, which under ordinary conditions is not a gas but a soft, white metal.

Yang Shao-Horn of the Department of Mechanical Engineering at the Massachusetts Institute of Technology and Michael O’Keefe of Berkeley Lab’s Materials Sciences Division used the OÅM to simultaneously resolve columns of lithium, cobalt, and oxygen atoms in the compound lithium cobalt oxide (LiCoO2). They and their colleagues report their work in the July, 2003 issue of the journal Nature Materials, in a report currently accessible online.

LiCoO2 is commonly used in the positive electrodes of lithium rechargeable batteries, whose operation is based on reversible insertion and removal of lithium ions to and from their positive and negative electrodes. Widely used in laptop computers, digital cameras, and many other devices, lithium ion batteries store more energy for their weight, operate at a higher voltage, and hold a charge much longer than other rechargeable batteries.

To improve their performance will require understanding how the atoms in the electrode materials — and the vacancies left by moving ions — are arranged in 3-D on the atomic scale. The structure of LiCoO2 is known theoretically and has been confirmed with techniques like x-ray diffraction and neutron powder diffraction: layers of lithium atoms lie between slabs of cobalt and oxygen, which are arranged in octahedrons. But lithium ions have never been seen by these techniques, nor have they been seen in previous attempts to image LiCoO2 with electron microscopy.

Thus when Shao-Horn, who had been investigating lithium ion batteries with colleagues at the University of Bordeaux I, approached microscopist O’Keefe in the summer of 2001 to ask whether it would be possible to image lithium ions in the material with a high-resolution transmission electron microscope, his first answer was, “I don’t think so.”

A transmission electron microscope (TEM) sends a beam of electrons through a thin sample of material; as the beam scatters from the electrical field of the atomic nuclei and their surrounding clouds of electrons, their unique arrangement affects the phase of the beam and to some extent its amplitude. When the altered beam exits the surface of a precisely oriented sample, it can be focused by an electromagnetic lens to project an image of the sample’s columns of atoms.

A TEM’s ability to image these wispy particles depends on many factors including the microscope beam’s energy, energy spread, and steadiness, and the distortion, or aberration, of the lens. All these combine to determine the smallest distance a microscope can distinguish between two adjacent objects, its native resolution. NCEM’s One Angstrom Microscope is a medium-energy TEM with a native resolution of 1.6 angstroms (an angstrom, symbolized Å, is a ten-billionth of a meter), good enough to resolve cobalt atoms directly.

For the highest possible resolution it is necessary to go beyond native resolution to a microscope’s information limit — the maximum amount of information about the sample that can be extracted from the scattered electron wave, even those portions of it that may be out of phase. One method of achieving this, called focal-series reconstruction, uses a computer to combine successive images, each made at a slightly different focus. In this way the One Angstrom Microscope has achieved a resolution as high as 0.78 angstrom.

But there’s a catch. Because the separate images in the series are focused differently, in-phase images of atoms in one image will be out of phase in another. How is the computer to know whether bright spots, dim spots, or no spots at all belong at particular locations in the composite image? How does the thickness of the sample affect the outcome?

The right number of blobs

To answer these questions, researchers use two kinds of computer programs. With the first, they can create a high-resolution simulation of what the microscope ought to see — “the right number of blobs for the right number of atoms,” as O’Keefe puts it.

The simulation program starts with a model of the material’s crystal structure, then dials in atomic specifications, the thickness and orientation of the sample, such parameters as the energy of the microscope’s electron beam, lens aberrations, beam misalignments, and other characteristics of both the sample and the instrument. Out comes a series of simulated images.

When O’Keefe, who wrote the first such image simulation program in the late 1970s, applied a recent version to the theoretical structure of LiCoO2, the simulation provided such essential information as what resolution the microscope had to achieve to see anything at all, and at what resolution all the different kinds of atoms should be sharpest. His initial skepticism about whether lithium atoms could be imaged began to wane.

For the simulation showed that in a sample of the right thickness, lithium ions should become visible at 1 Å. And at 0.8 Å all three kinds of atoms should be clearly visible — a resolution that was, indeed, just possible to reach with the One Angstrom Microscope.

O’Keefe says, “The simulation showed that the columns of oxygen atoms should look bright and sharp-edged, the cobalts should be fuzzy, and the lithium should be small, weak, and look a little stretched.”

In 2002, working with NCEM’s Chris Nelson to master the operation of the OÅM, Shao-Horn obtained many series of 20 differently focused images of individual crystals from a LiCoO2 powder sample. The sample was prepared and well characterized by conventional x-ray diffraction in collaboration with her colleagues Laurence Croguennec and Claude Delmas, of the Institute de Chimie de la Matière Condensée de Bordeaux-CNRS and the Ecole National Supèrieure de Chimie et Physique de Bordeaux at the University of Bordeaux I.

With a second computer program and their measurements of the microscope parameters, researchers take the experimental images and work backwards to produce a representation of the electron wave leaving the exit surface of the specimen. After confirming the focal value for each image in the series, Shao-Horn and her colleagues used the reconstruction program to produce an image from a small area of a thin edge of a LiCoO2 crystal which matched the one predicted by the simulation program.

“Because material from which some lithium ions are removed is somewhat unstable under the electron beam, experimental imaging of the lithium ions and vacancies proved difficult in this study,” says Shao-Horn. “Nevertheless, the atomic resolution of lithium atoms is a novel and significant achievement, with implications for better understanding not only of lithium ion battery materials but of many other electroceramic materials as well.”

Says O’Keefe, “We have shown that the range of the OÅM, and mid-voltage microscopes like it, can be extended all the way from heavy atoms down through oxygen, nitrogen, and carbon to the lightest metal — in fact, except for helium and hydrogen, the lightest atoms of all.”