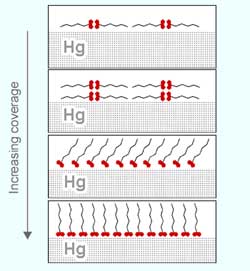 A team of scientists from the U.S. Department of Energy’s Brookhaven National Laboratory, Harvard University, and Bar-Ilan University in Israel have grown ultrathin films made of organic molecules on the surface of liquid mercury. The results, reported in the November 15, 2002, issue of Science, reveal a series of new molecular structures that could lead to novel applications in nanotechnology, which involves manipulating materials at the atomic scale.

Growing molecular films on liquid surfaces is part of an ongoing activity by Brookhaven scientists to create nanomaterials, which are a few billionths of a meter in thickness. Ultrathin films are becoming increasingly important for fast-developing applications, such as faster and smaller electronic and magnetic devices, advanced biotechnological membranes, and controlled drug release in the human body. The Brookhaven team is a leader in the field of liquid surface-supported film growth, with expertise gained over the past 20 years.

“When you grow a film on a solid surface, the molecules of the film tend to interlock with those of the underlying support,” says Benjamin Ocko, the Brookhaven physicist who participated in the study. “But an underlying liquid surface is not ordered and provides an ideal setting for studying ultrathin states of matter without the complications of the solid support.”

Ocko and his colleagues first filled a small tray with liquid mercury and then deposited on the surface a nanometer-thin film of stearic acid, an organic waxlike material that is a common component of cell membranes. Since stearic acid is not soluble in mercury, it floats on the surface.

To see how the molecules of the film organize on the surface, the scientists measured how x-rays produced by the National Synchrotron Light Source at Brookhaven scattered off the ultrathin molecular film. Key to the study was a unique instrument used for tilting the x-rays downward onto the liquid mercury surface, which was developed by Peter Pershan, a physicist at Harvard and one of the study’s authors, along with the Brookhaven team.

The scientists discovered that, as the number of molecules deposited on the surface increased, they formed four distinct patterns. “First, when a few molecules are deposited, they tend to take as much space as they can, by lying on the surface,” explains Henning Kraack, a physics Ph.D. student from Bar-Ilan and the study’s lead author. “When more molecules are added, a second layer of molecules lies on top of the first one.

“Then, as even more molecules are deposited,” Kraack continues, “they ’stand up’ to leave more space to neighboring molecules, allowing them to densely pack in one layer. But even then, before standing up straight, the molecules are first tilted to the side, and stand up completely only when they are ’squeezed’ by other molecules that ’elbow their way through.’”

These observations came as a surprise, since previous studies have shown that, when stearic molecules are deposited on water — the only other liquid support studied so far — they only stand up on the surface. “Patterns in which molecules lie flat on a liquid surface have never been observed before,” Kraack says.

Moshe Deutsch, a physicist at Bar-Ilan and one of the authors of the study, notes that because the liquid mercury does not seem to influence too much the way the stearic molecules assemble, “growing films on a liquid surface is like growing them without support at all.” It might be possible to choose a film pattern, he adds, simply by selecting the appropriate molecular coverage.

“This work shows that without an underlying lattice, we can control film growth,” Deutsch says. “By growing other molecules on a liquid support, we will be able to control the size and properties of other films, and thus tailor them for different applications, in particular their use in nanoelectronics and nanosensor technology.”