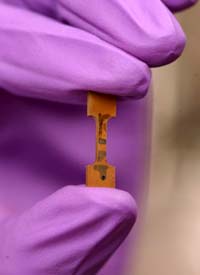 This form of copper, produced by Johns Hopkins engineers, is stronger than the normal type of copper, yet it remains ductile, meaning it can stretch without breaking. <br>Photo by Will Kirk

Combining old-fashioned metal-working techniques with modern nanotechnology, engineers at The Johns Hopkins University have produced a form of pure copper metal that is six times stronger than normal, with no significant loss of ductility.

The achievement, reported in the Oct. 31 issue of the journal “Nature,” is important because earlier attempts to strengthen a pure metal such as copper have almost always resulted in a material that is much less ductile, meaning it is more likely to fracture when it is stretched. Strength, on the other hand, refers to how much stress a metal can tolerate before its shape is permanently deformed.

“We were able to get the strength of the pure copper up to and beyond that of copper alloys without adding any other metals to it and without sacrificing ductility,” said En Ma, a professor in the Department of Materials Science and Engineering and a co-author of the paper. Ma said that such strong and tough pure metals could have applications in microelectromechanical systems, for which suitable alloys may be more difficult to produce and may be more prone to corrosion, and in biomedical devices, in which a pure metal may be preferable to alloys that could expose the body to toxic metallic or non-metallic elements.

To make the pure copper stronger, the Johns Hopkins engineers had to employ extreme cold and mechanical manipulation, followed by a carefully designed heat treatment. “A real significance of this project was that we showed what traditional metallurgical processing can do in the new era of nanotechnology,” said Yinmin Wang, a doctoral student and lead author of the paper. Ma is Wang’s faculty advisor.

The researchers started with a 1-inch cube of pure commercial copper and dipped it into liquid nitrogen for three to five minutes at a temperature of -196 degrees C (-321 degrees F). After removing it, the researchers rolled the copper flat, cooling the sample between rolling passes, to a final thickness of about 1 mm. This affected the metal’s microscopic crystals, each consisting of atoms arranged in a lattice pattern. The severe rolling deformation created a high density of dislocations, meaning atomic planes had been moved out of their proper position within the lattice. The cold temperatures kept these defects from quickly moving back into their original alignment.

Next, the copper was placed in an oven for three minutes to bake at 200 degrees C (392 degree F.) “As they heated up, the dislocations began to disappear in a process called ’re-crystalization,’” Wang explained. “New, ultra fine crystal grains formed that were almost dislocation-free. The higher the stored dislocations density after rolling, the finer the re-crystallized grains during heating. In our copper, these new grains were only a couple of hundred nanometers in size, several hundred times smaller than the original crystals, making the copper much stronger than it was in its original form.”

This change in strength occurred because of the reduction in grain size to a level similar to that of nanocrystalline materials, which are defined as materials with grain sizes less than about 100 nanometers. (One nanometer is one millionth of a millimeter). When the grains are smaller, Ma explained, more grain boundaries exist to block the moving dislocations, and the metal’s strength is increased.

By carefully controlling the temperature and the timing when they heated the metal, however, the Johns Hopkins engineers allowed about 20-25 percent of the copper’s crystals to grow to a larger size in a process called “abnormal grain growth,” meaning non-uniform grain growth. According to the researchers, this final mix of ultra fine grains and larger ones, described as a “bimodal distribution,” is what gave the new copper its coexisting high strength and ductility. “By manipulating the grain size distribution starting from a nanometer-scaled grain structure, we reached an inhomogeneous microstructure that is stable during stretching,” Ma said. “That reinstated the copper’s ability to stretch uniformly without fracture, a feature very important for the formability of the high-strength copper when processing it into different shapes in forming operations.”

Next, the researchers plan to test their process with other pure metals as well as metal alloys, which are widely used in manufacturing, to see if it produces the same change in mechanical properties. “Materials with uniformly nanocrystalline grains can give you very high strength, but usually not enough ductility,” Ma said. “They are also difficult to process, often involving compaction of tiny nanocrystalline powders. If you want a metal that is both strong and ductile, you may want to go the bulk processing route described in this Nature paper. Our work demonstrates that extraordinary properties can be derived from a nanostructured material by first creating and then tailoring the ultra fine grain structures.”

Other co-authors of the “Nature” paper were Mingwei Chen, an associate research scientist, and Fenghua Zhou, a postdoctoral fellow, both affiliated with the Johns Hopkins Department of Mechanical Engineering. The National Science Foundation provided funding for the research.

Images available of the researchers, a sample of the strong copper and microscopic views of the metal; contact Phil Sneiderman