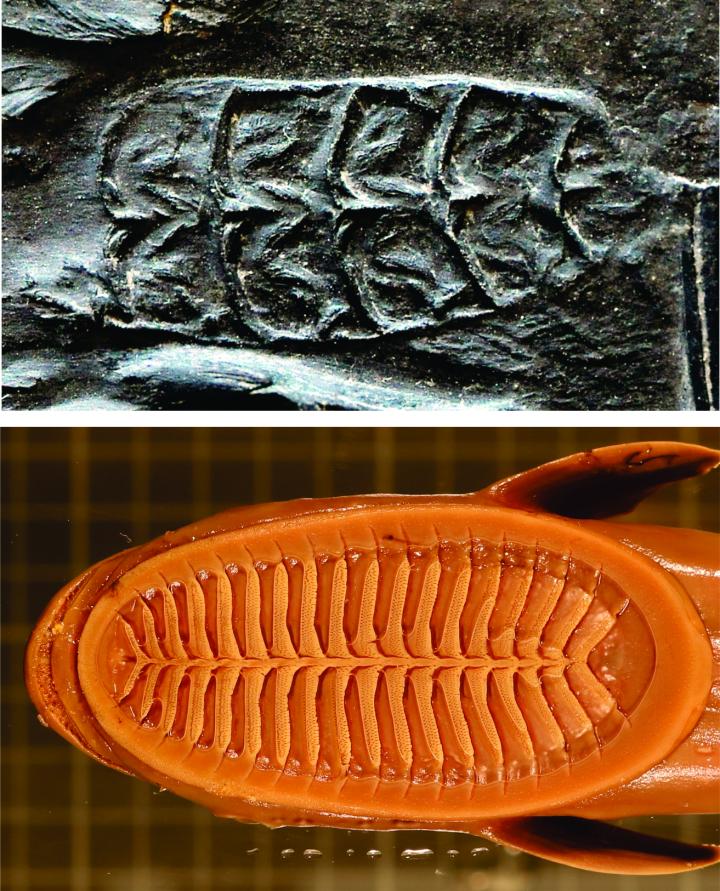 Image of Opisthomyzon glaronensis fossil featuring six lamellae (top) and dorsal view of a modern remora disc with more rows of lamellae (bottom). According to Brooke Flammang, professor of biological sciences at NJIT, while scientists have shed some light on the origins of the remora's modified fin structure, fundamental aspects of the disk's evolution have largely remained unclear. Credit: Matt Friedman, University of Michigan and Brooke Flammang, New Jersey Institute of Technology

Key to the remora's adhesion are the disk's well-known capabilities for generating suction, as well as friction created by spiky bones within the disk called lamellae to maintain hold on its host.

However, the factors driving the evolution of remora's unique disc morphology have long eluded researchers seeking to understand, and even engineer new devices and adhesives that mimic, the fish's uncanny ability to lock on to various surface types without harming their host or expending much energy, often for hours at a time under extreme oceanic forces.

In a study led at New Jersey Institute of Technology (NJIT), researchers have showcased a new biologically inspired remora disc capable of replicating the passive forces of suction and friction that power the fish's ability, demonstrating up to 60% greater hold than has been measured for live remoras attached to shark skin.

Using the disc model to explore evolutionary drivers of the remora's disc, researchers say the study's findings provide evidence that today's living species of remora have evolved a greater number of lamellae over time to enhance their holding power and ability to attach to a broader range of hosts with smoother surfaces, thereby increasing their chance for survival.

The study, featured in Bioinspiration and Biomimetics, indicates the disc model may be used to inform the design of more effective, lower-cost adhesive technologies in the future.

“The beauty behind the remora's adhesive mechanism is that biological tissues inherently do most of the work,” said Brooke Flammang, professor of biological sciences at NJIT who led the study. “The most significant aspect of this research is that our robotic disc relies completely on the fundamental physics driving the adhesive mechanism in remoras, allowing us to determine biologically relevant performance and gain insight into the evolution of the remora's disc. This was previously not possible with past designs that required a human operator to control the system.”

Diverging from many of their closest scavenger-like ancestors, such as cobia (Rachycentron canadum), the remora fish (of the family Echeneidae) is believed to have first begun attaching to hosts with rough surfaces, akin to sharks, after having evolved its suction disc from dorsal fin spines nearly 32 million years ago.

The disc of living remoras today now features a fleshy-soft outer lip for suction while the disc's interior houses many more linear rows of tissue (lamellae) with tooth-like tissue projections (spinules), which the fish raises to generate friction against various host bodies to prevent slipping during hitchhiking.

According to Flammang, while scientists have shed some light on the origins of the remora's modified fin structure, fundamental aspects of the disk's evolution have largely remained unclear.

“The evolution of the remora's disc is largely unknown,” said Flammang. “There is one fossil remora, Opisthomyzon, in the fossil record that has a disc with fewer lamellae [than today's remoras] without spinules towards the back of the head.”

Flammang says this raises two questions: “how” and “why.”

“The 'how' is from the dorsal fin, although the intermediate evolutionary stages aren't known,” explained Flammang. “If you look at a phylogeny of remoras it shows that those species that are thought to be more derived have more lamellae … the 'why' has been assumed to be for adhesive performance, but that was never tested before this paper.”

To learn more, Kaelyn Gamel, the study's first author and former graduate researcher in the Flammang lab, designed a remora-inspired disc from commercially available 3-D printed materials that could autonomously maintain attachment to various surfaces and be modified by adding and removing lamellae, enabling the team to investigate the performance of increased lamellar number on shear adhesion.

“Our disc's capability to add and remove lamellae while acting as a passive system allowed us to change the amount of friction along with the ambient pressure within the disc,” said Gamel, now a Ph.D. researcher at the University of Akron. “We were able to compare the difference between no friction, some friction and a lot of friction based on the variation in lamellae number.”

In collaboration with Austin Garner, a researcher at the University of Akron, the team conducted pull-off tests with their model disc underwater, experimenting with the model's lamellar number (up to 12 lamellae) to measure the shear force and time it took to pull the disc from silicon molds with surfaces ranging from completely smooth to those exceeding shark skin roughness (350-grit, 180-grit and 100-grit).

Overall, the team found that their disc's adhesive performance was strongly correlated with an increase in the disc's lamellae, observing a “sweet spot” in suction power between nine and 12 lamellae. When modified to 12 lamellae and 294 spinules, the team's disc weighed just 45 grams and withstood 27 N (newton) forces for 50 seconds — almost three times the force that would typically pull a remora from a shark. The tests also revealed a minimum of six lamellae — the number coincidentally found on the 32-million-year-old fossil Opisthomyzon — were needed to maintain adhesion.

“What is most striking about these results is that for a given disc shape, there is an optimal range in which the friction and suction phenomena are balanced, and [as their disc size has gotten longer] remoras have evolved to maintain this sweet spot of high-performance adhesion,” explained Flammang.

The team now says their remora disk model will be used for future evolutionary studies to learn whether suction or friction predominated attachment in earliest remora ancestors and how evolution of disc shape affects adhesion. The disc may also have engineering applications in everything from medical biosensors and drug delivery devices to geo-sensing tags for ecological studies and tracking marine life. “One of the greatest advantages to our design is that it operates autonomously because it relies only on the physics of the system for operation,” said Flammang. “This makes it easily scalable for a multitude of new technologies, both for medical and scientific purposes.”

About New Jersey Institute of Technology: One of only 32 polytechnic universities in the United States, New Jersey Institute of Technology (NJIT) prepares students to become leaders in the technology-dependent economy of the 21st century. NJIT's multidisciplinary curriculum and computing-intensive approach to education provide technological proficiency, business acumen and leadership skills. NJIT is rated an “R1” research university by the Carnegie Classification®, which indicates the highest level of research activity. NJIT conducts approximately $162 million in research activity each year and has a $2.8 billion annual economic impact on the State of New Jersey. NJIT is ranked #1 nationally by Forbes for the upward economic mobility of its lowest-income students and is among the top 2 percent of public colleges and universities in return on educational investment, according to PayScale.com. NJIT also is ranked by U.S. News and World Report as one of the top 50 public national universities.