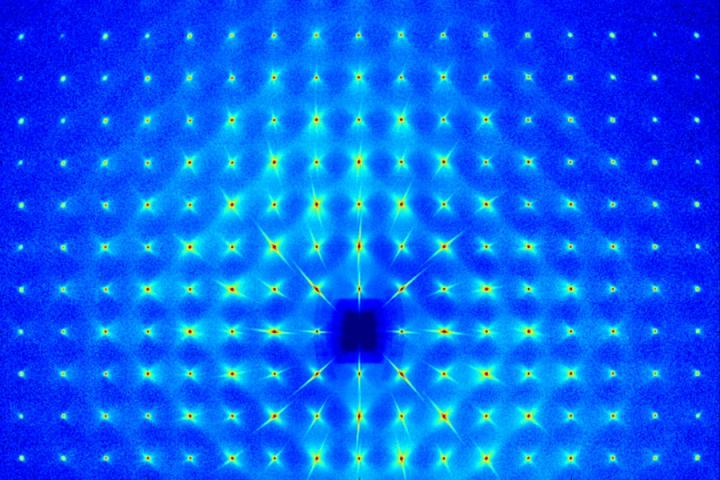 Using state-of-the art neutron and synchrotron X-ray scattering, Argonne scientists and their collaborators are helping to answer long-held questions about a technologically important class of materials called relaxor ferroelectrics, which are often lead-based. These materials have mechanical and electrical properties that are useful in applications such as sonar and ultrasound. The more scientists understand about the internal structure of relaxor ferroelectrics, the better materials we can develop for these and other applications.

“We understand the long-range order very well, but for this experiment we developed novel tools and methods to study the local order.”
— Stephan Rosenkranz, Argonne senior physicist

Because lead is toxic, scientists are trying to develop non-lead-based materials that can perform even better than the lead-based ferroelectrics. To develop these materials, scientists are first trying to uncover what aspects of the relaxor ferroelectric's crystal structure cause its unique properties. Although the structure is orderly and predictable on average, deviations from this order can occur on a local, or nanoscale level. These breaks in the long-range symmetry of the overall structure play a crucial role in determining the material's properties.

“We understand the long-range order very well, but for this experiment we developed novel tools and methods to study the local order,” said Argonne senior physicist Stephan Rosenkranz.

Scientists from Argonne and the National Institute of Standards and Technology, along with their collaborators, studied a series of lead-based ferroelectrics with different local orders, and therefore different properties. Using new instrumentation designed by Argonne scientists that is able to provide a much larger and more detailed measurement than previous instruments, the team studied the diffuse scattering of the materials, or how the local deviations in structure affect the otherwise more orderly scattering pattern.

Previous researchers have identified a certain diffuse scattering pattern, which takes the shape of a butterfly, and associated it with the anomalous dielectric properties of relaxor ferroelectrics. When Argonne scientists analyzed their experimental data, however, they found that the butterfly-shaped scattering was strongly correlated with piezoelectric behavior.

“Now we can think about what kind of local order causes this butterfly scattering, and how can we design materials that have the same structural features that give rise to this effect,” said Argonne physicist Danny Phelan.

As for the real cause of the anomalous dielectric properties, the scientists propose that it arises from competing interactions that lead to “frustration” in the material.

The new discoveries stemmed from the scientists' use of both neutron scattering and X-ray scattering. “There is invaluable complementarity to using both of these techniques,” said Phelan. “Using one or the other doesn't give you the whole picture.”

The scientists will use these discoveries to inform models of relaxor ferroelectrics that are used to develop new materials. Future experiments will further illuminate the relationship between local order and material properties.

The team published their results in a Nature Materials paper, titled “The relation of local order to material properties in relaxor ferroelectrics,” on June 25.

The team used the Spallation Neutron Source, a DOE Office of Science User Facility, located at DOE's Oak Ridge National Laboratory and the Cornell High Energy Synchrotron Source in their research. This research was funded by the DOE Office of Science, Basic Energy Sciences program. The work was also supported by the National Science Foundation, the U.S. Office of Naval Research, the Natural Sciences and Engineering Research Council of Canada and the National Institute of Standards and Technology, U.S. Department of Commerce.