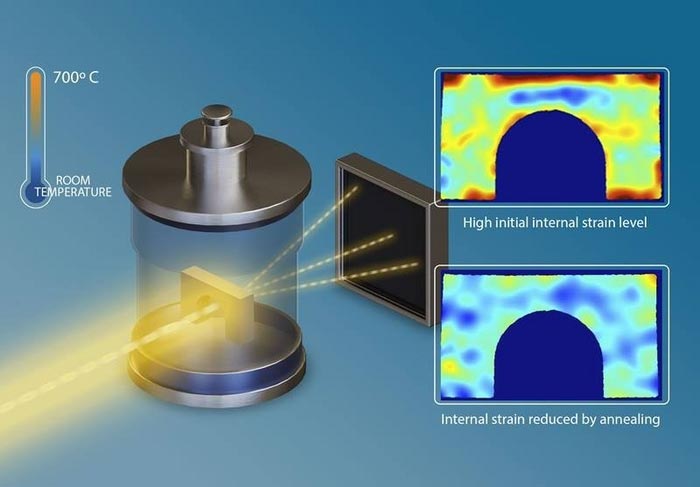 Researchers are optimizing industrial designs to produce more efficient parts using additive manufacturing (AM). AM involves “printing” 3-D metal parts layer by layer. Material made using AM methods that employ lasers can have residual strain resulting from rapid heating and cooling during printing. Heat treating, or annealing, parts after they are printed reduces the strain. But too much heat can cause unwanted structural changes. Using neutron diffraction, researchers measured the strain inside samples of AM formed Inconel 625, a common metal alloy. They then used neutron imaging, a complementary technique, to determine the optimal annealing times and temperatures that relieve strain while also minimizing other unwanted changes in the materials.

The right heat treatment anneals parts faster without compromising their structural integrity. Scientists can use data from neutron scattering to better understand how to design heat treatment cycles for parts. Data from neutron scattering validate computer models that simulate the amount and distribution of residual strain formed during the AM process. The new model can more accurately predict whether slightly changing the design of a part will make it stronger by minimizing residual strain formation during production. The new model can also indicate if changing the diameter of the AM laser beam or the speed at which it travels will improve production quality.

Laser-based AM can result in residual strain inside metal parts caused by rapid heating and cooling. Heat treating, or annealing, metal parts afterward reduces strain. Researchers at General Electric (GE) needed to better understand where residual strain forms and at what temperatures annealing should be conducted to relieve the strain to optimize component design and annealing time and temperature. Scientists from the GE Global Research, the University of California, Berkeley, and the Spallation Neutron Source, a Department of Energy (DOE) Office of Science user facility at Oak Ridge National Laboratory (ORNL), performed neutron experiments and computational modeling to understand the AM and annealing process. They used neutron diffraction to locate the residual strain in samples of a common metal alloy, Inconel 625. The researchers performed the initial neutron calibration experiments at the NOBORU beamline at the Japan Proton Accelerator Research Complex (J-PARC). Neutron imaging then enabled them to observe the samples inside a high-temperature furnace, in real time, during annealing. The neutrons easily penetrated the furnace walls and allowed mapping the strain relaxation throughout the entire part during annealing.

The researchers compared the measured stress to computer simulations. They conducted simulations of the AM process to predict the residual stress distributions within the samples as a function of the process parameters. Comparisons of the simulation results to the room temperature experimental measurements showed good agreements when the simulation data are averaged over the volume of the part, confirming the usefulness of the experiments for validating simulation results. The results are helping GE validate its computer models and adjust component designs to reduce residual strain formation during additive manufacturing. This data will also enable GE to anneal its products and optimize the strain relaxation without causing undesirable structural problems.

This research was supported by the DOE Office of Science, the GE Global Research Center, the University of California at Berkeley, and Japan Atomic Energy Agency. The neutron scattering was performed at the Spallation Neutron Source, a DOE Office of Science user facility operated by ORNL and at the NOBORU (J-PARC) instrument of the Japanese Spallation Neutron Source. The work on the development of energy resolved imaging and MCP/Timepix detector at the University of California at Berkeley was partially funded through DOE research grants.