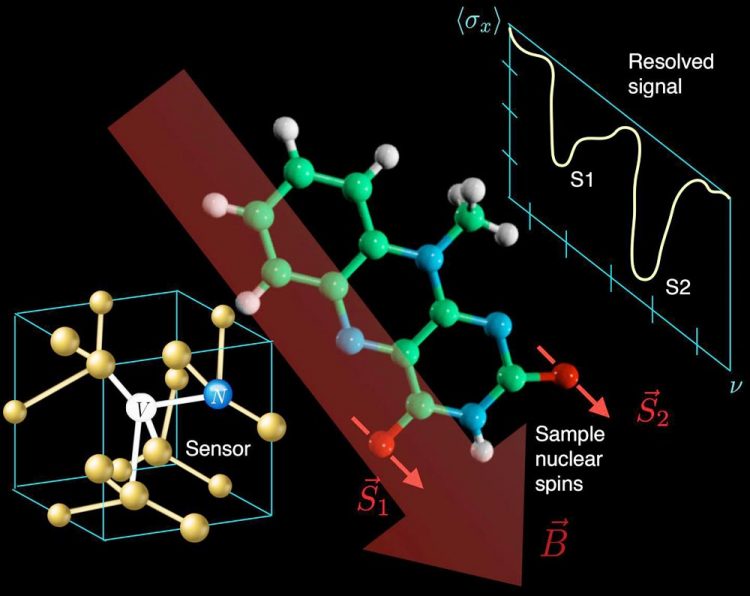 Nuclear magnetic resonance (NMR) is the technique behind a variety of applications, such as medical imaging, neuroscience or detection of drugs and explosives.

With the help of quantum sensors, NMR has been adapted to work in the nanoscale regime, where it has both the potential to impact many disciplines, such as life sciences, biology, medicine, and to provide measurements of incomparable precision and sensitivity.

In particular, “we expect that the combination of quantum sensors and dynamical decoupling techniques allows NMR imaging of single biomolecules” said the authors, among which are Dr. Jorge Casanova (Ikerbasque researcher) and Ikerbasque Professor Enrique Solano, at the Quantum Technologies for Information Science (QUTIS) group of the UPV/EHU's Department of Physical Chemistry, as well as researchers of the CSIC, and the University of Ulm (Germany).

This quantum-enhanced NMR “will be able to resolve chemical shifts in tiny picoliter samples, producing biosensors with unparalleled sensitivity and providing new insights into the structure, dynamics, and function of biomolecules and biological processes”, they added.

In this context, a fundamental tool to improve the sensitivity of NMR setups is to apply large magnetic fields “that polarize our samples, enhance the signal and increase coherence”, they pointed out.

This strategy is used, for instance, in MRI, where the human body is subject to large magnetic fields generated by superconducting coils. There are however problems when interfacing these samples with our quantum sensors, “because our samples may oscillate much faster than our sensor can follow”.

In the work published in Physical Review Letters, the authors developed a protocol to allow a quantum sensor to measure the nuclear and electronic spins in arbitrary samples, even when they happen in large magnetic fields. These methods use a low-power microwave radiation to bridge the energy difference between their sensor and the sample.

“The protocol is robust and requires less energy than previous techniques. This not only extends the operation regime of the sensor to stronger magnetic fields, but also prevents the heating of biological samples that would result when using conventional protocols and microwave powers. As a consequence, this work opens a new research line and paves the way for the safe use of nanoscale NMR in the study of biological samples and large biomolecules,” said the authors.