Organic semiconductors get weird at the edge: University of British Columbia research 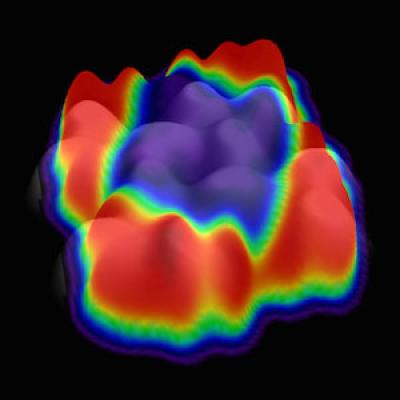 This composite image shows the difference in electronic states at the edge of the material compared to molecules in the centre. Credit: University of British Columbia

The work, published this week in Nature Communications, details how electronic properties at the edges of organic molecular systems differ from the rest of the material.

Organic materials–plastics–are of great interest for use in solar panels, light emitting diodes and transistors. They're low-cost, light, and take less energy to produce than silicon. Interfaces–where one type of material meets another–play a key role in the functionality of all these devices.

“We found that the polarization-induced energy level shifts from the edge of these materials to the interior are significant, and can't be neglected when designing components,” says UBC PhD researcher Katherine Cochrane, lead author of the paper.

'While we were expecting some differences, we were surprised by the size of the effect and that it occurred on the scale of a single molecule,” adds UBC researcher Sarah Burke, an expert on nanoscale electronic and optoelectronic materials and author on the paper.

Not only did the molecules at the edge of the nano-islands have very different properties than in the middle, the variation in properties depended on the position and orientation of other molecules nearby.

The researchers, part of UBC's Quantum Matter Institute, used a simple, analytical model to explain the differences which can be extended to predict interface properties in much more complex systems, like those encountered in a real device.

“Herbert Kroemer said in his Nobel Lecture that 'The interface is the device' and it's equally true for organic materials,” says Burke. “The differences we've seen at the edges of molecular clusters highlights one effect that we'll need to consider as we design new materials for these devices, but likely they are many more surprises waiting to be discovered.”

Cochrane and colleagues plan to keep looking at what happens at interfaces in these materials and to work with materials chemists to guide the design rules for the structure and electronic properties of future devices.

The experiment was performed at UBC's state-of-the-art Laboratory for Atomic Imaging Research, which features three specially designed ultra-quiet rooms that allow the instruments to sit in complete silence, totally still, to perform their delicate measurements. This allowed the researchers to take dense data sets with a tool called a scanning tunnelling microscope (STM) that showed them the energy levels in real-space on the scale of single atoms.