Home / Materials Sciences / One material with two functions could lead to faster memory
24.08.2021

One material with two functions could lead to faster memory 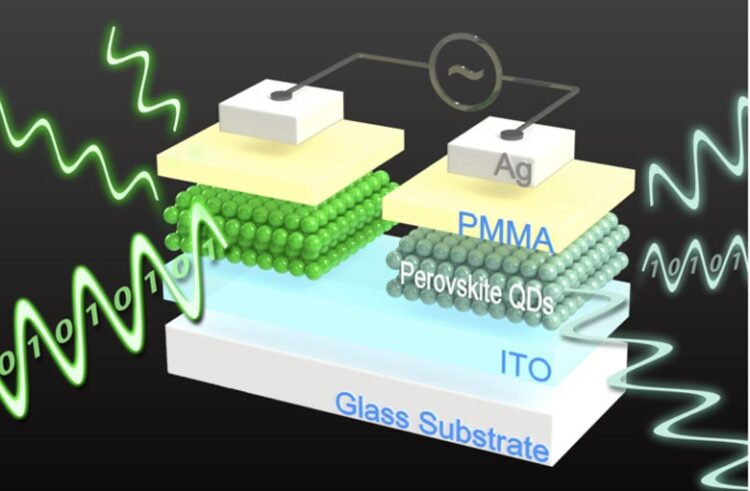 An artist’s rendering shows the capability of a CsPbBr3 LEM device for parallel optical and electrical transmission of encoded information. Two colors can be emitted by the perovskite LEM: green and aqua. These two colors could serve as a real-time indicator of the digital status i.e., write or erase of the LEM. Researchers have shown that such seamless integration of photonic emission and electrical resistive switching will open a new horizon for more advanced perovskite optoelectronic technologies.
Credit: Kyushu University/Ya-Ju Lee

Researchers use perovskite to develop a memory device readable through both electrical and optical methods.

In a step toward a future of higher performance memory devices, researchers from National Taiwan Normal University and Kyushu University have developed a new device that needs only a single semiconductor known as perovskite to simultaneously store and visually transmit data.

By integrating a light-emitting electrochemical cell with a resistive random-access memory that are both based on perovskite, the team achieved parallel and synchronous reading of data both electrically and optically in a ‘light-emitting memory.’

At the most fundamental level, digital data is stored as a basic unit of information known as a bit, which is often represented as either a one or a zero. Thus, the pursuit of better data storage comes down to finding more efficient ways to store and read these ones and zeros.

While flash memory has become extremely popular, researchers have been searching for alternatives that could further improve speed and simplify fabrication.

One candidate is nonvolatile resistive random-access memory, or RRAM. Instead of storing charge in transistors like in flash memory, resistive memory uses materials that can switch between states of high and low resistance to represent ones and zeros.

“However, the electrical measurements needed to check the resistance and read zeros and ones from RRAM can limit the overall speed,” explains Chun-Chieh Chang, professor at National Taiwan Normal University and one of the corresponding authors of the study published in Nature Communications.

“Recently, to overcome this issue, RRAMs have been combined with LEDs to develop something called light-emitting memories. In this case, the data can also be read by checking if the LED is on or off. This additional optical reading also opens new routes for carrying large amounts of information.”

To overcome this, the researchers turned to perovskite, a type of material with a crystalline structure through which ions can migrate to give it unique physical, optical, and even electrical properties. By controlling the ion migration, perovskite researchers have been constructing new materials with unique properties.

“Using just one perovskite layer between contacts, we could fabricate a device that works both as a RRAM and a light-emitting electrochemical cell,” explains National Taiwan Normal University’s Ya-Ju Lee, who also led the study. “By taking advantage of the fast, electrically switchable ionic motion that enables this dual functionality in a single layer of perovskite, we were able to connect two devices together and develop an all-inorganic perovskite light-emitting memory.”

Using perovskite consisting of cesium lead bromide (CsPbBr3), the team demonstrated that data can be electrically written, erased, and read in one of the perovskite devices acting as an RRAM. Simultaneously, the second perovskite device can optically transmit whether data is being written or erased through light emission by working as a light-emitting electrochemical cell with a high transmission speed.

Furthermore, the researchers used perovskite quantum dots of two different sizes for the two devices in the light-emitting memory to achieve different emission colors depending on whether the memory was being written or erased, providing a real-time indicator of the ones and zeros.

Kaoru Tamada, a distinguished professor at Kyushu University’s Institute for Materials Chemistry and Engineering who was also involved in the project, sees many opportunities for this new technology going forward.

“This demonstration significantly broadens the scope of applications of the developed all-perovskite light-emitting memory and can serve as a new paradigm of synergistic combination between electronic and photonic degrees of freedom in perovskite materials,” says Tamada.

“From multicast mesh network to data encryption systems, these findings have the potential for numerous applications in next-generation technologies.”

Kyushu University is one of Japan’s leading research-oriented institutes of higher education since its founding in 1911. Home to around 19,000 students and 8,000 faculty and staff, Kyushu U’s world-class research centers cover a wide range of study areas and research fields, from the humanities and arts to engineering and medical sciences. Its multiple campuses–including the largest in Japan–are located around Fukuoka City, a coastal metropolis on the southwestern Japanese island of Kyushu that is frequently ranked among the world’s most livable cities and historically known as a gateway to Asia.